The Church of the Gipper argues big government threatens freedom. But what about private parties? Such as Donald Trump.

Two themes underlie support for the Church of the Gipper. One is economic: that low taxes, particularly on the wealthy, bring prosperity and job growth. I discussed the evidence for and against this proposition in last week’s column.

The second theme is liberty: that big government threatens freedom. The most extreme right-wing members of the US Congress call themselves the House Freedom Caucus. Grover Norquist, in demanding that politicians sign his anti-tax pledge famously explained, “My goal is to cut government in half in twenty-five years, to get it down to the size where we can drown it in the bathtub.”

What does the evidence show about the connection between government size and freedom?

The Organization for Economic Cooperation and Development (OECD) collects and publishes economic data on each of its member nations. The OECD members are mainly countries with advanced economies. As a ratio to gross domestic spending (GDP) taxes range from about 20% to 50%. The United States is among the nations with the lowest tax collections. Several of the Scandinavian countries have the highest.

Several organizations attempt to rate countries by their freedom. In an earlier column I used ratings put out by Freedom House, which receives support from the US government. For this analysis, I turned to an organization that has received heavy support from David and Charles Koch. The Cato Institute was founded by the Koch brothers to push Libertarian principles; the Kochs continue to have heavy involvement in Cato’s management.

Recently, Cato joined with two other Libertarian think tanks, the Fraser Institute of Canada and the Liberales Institut at the Friedrich Naumann Foundation for Freedom of Germany to publish The Human Freedom Index. The chart below compares the freedom rating from this study to the size of taxes from the OECD analysis.

The horizontal scale in the chart shows total taxes as a percentage of GDP for OECD members for 2014, the most recent year for which data are available. I have singled out two countries: Denmark, represented by squares, and the US, represented by triangle.

The vertical scale shows how Cato and its fellows rate each nation using the two “freedom scores.” One is for personal freedom and shown in orange. The other is for economic freedom, shown in blue. The higher the score, the freer a country is, according to Cato. Comparing the US to Denmark, one would be hard put to argue that the Danes have sacrificed personal or economic freedom as the result of doubling the size of their public sector. 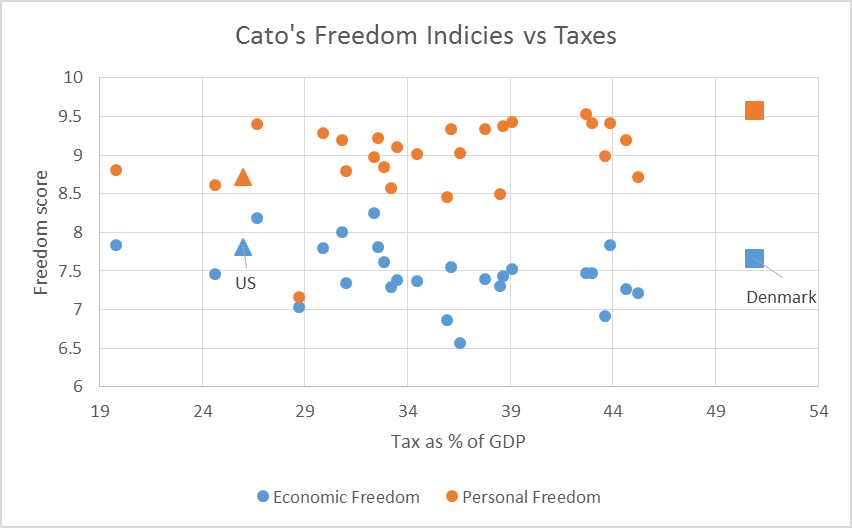 Likewise there is a weak negative relationship between economic freedom and the size of government. This could be due to Cato’s decision to include the top marginal tax in calculating economic freedom. Despite this, Denmark enjoys a slight advantage over the US in economic freedom, as calculated by this Koch-based organization.

The best conclusion that one can make is that government size and taxes are largely irrelevant to the amount of personal freedom or even economic freedom that citizens enjoy. The differences between nations are much more a function of the strength of their democratic and legal institutions than the percentage of the economy taken up by taxes.

What about comparative freedom between states in the US? Cato is among organizations publishing state freedom indices. A look at how Cato calculates freedom shows a hodgepodge of issues. Some appeal to the right; others to the left.

In some cases, there is disagreement among libertarians. For instance, Cato, reflecting the views of the Kochs, gives a better score to states with so-called “right to work” laws. Other libertarians regard these laws as government interference with contracts between private parties and therefore a restriction on freedom. Although most restrictions on business, like environmental laws, rate a state downgrade, so do marijuana and abortion restrictions. Beer, wine, and spirits taxes are regarded as an infringement on freedom.

Cato is particularly hard on states that attempt to regulate guns. It lists 25 different restrictions that result in a state freedom downgrade, including bans on machine guns, short barreled shotguns, silencers, gun locking devices, and background checks for gun sales.

The Cato analysis penalizes states according to their number of public employees. Yet fewer public employees can make government seem more oppressive. In many states politicians like to point to the Department of Motor Vehicles as proof that government cannot be trusted to offer good customer service. The underlying problem, of course, is that long lines at the DMV are caused by too few employees. Similarly, if one cannot talk to someone at the IRS about tax problems or ask about Medicaid payments, the answer to government oppression may lie in hiring more people rather than further cutting employment.

The underlying assumption behind Cato’s list, and those of similar groups, is that government is the only threat to freedom. Yet for many people, the more immediate threat to freedom may come from private parties. Employers are often in a particularly strong position to demand that people surrender their rights.

People enamored by Donald Trump can sign up for Trump Talk. As part of the sign-up process, the volunteer is expected to check a box next to “I agree to Non Disclosure Agreemen.t” What is one agreeing to? The agreement runs to two and a half pages. Here is section 2:

No Disparagement. During the term of your service and at all times thereafter you hereby promise and agree not to demean or disparage publicly the Company, Mr. Trump, any Trump Company, any Family Member, or any Family Member Company or any asset any of the foregoing own, or product or service any of the foregoing offer, in each case by or in any of the Restricted Means and Contexts and to prevent your employees from doing so.

In other words, prospective Trump volunteers agree forever to never criticize Donald Trump, his companies, or his family members.

Reflecting the merger of Trump’s presidential and his campaigns companies, this agreement is likely copied from one that the Trump businesses require their employees and vendors to sign. Having signed this agreement, it is not surprising that few former employees or suppliers have been willing to be quoted by name; they would be leaving themselves open sued by Trump.

It is likely that most Trump Talk volunteers will check the box without ever reading it. What about those who read and sign up regardless, voluntarily giving up their right to express their opinion? This points to what is arguably the greatest threat to freedom in advanced democracies: the willingness of so many to give up their right to independent thought, to outsource their critical thinking to someone else.

Not so long ago it became fashionable among conservatives to attach “knee-jerk” to “liberal.” To be called a “knee-jerk liberal” implied that one took the party line without thought. It was not a compliment and was deeply resented by most liberals.

I was surprised, therefore, when some years ago it became popular among listeners of the Rush Limbaugh radio show to themselves as “dittoheads.” To admit to being an unquestioning supporter of an idea or opinion as expressed by a particular person or organization, even if true, strikes me as very strange.

To be part of a group of dittoheads, whether liberal or conservative, seems suffocating. The Church of the Gipper has crushed original thought on the right, leading to the rise of Donald Trump. Ironically his rise is an opportunity to break free—provided that one’s idea of freedom goes beyond the right to swear eternal fealty to Donald Trump.