Near what is now Cherry St., and the fabulous Notre Dame convent atop the hill. 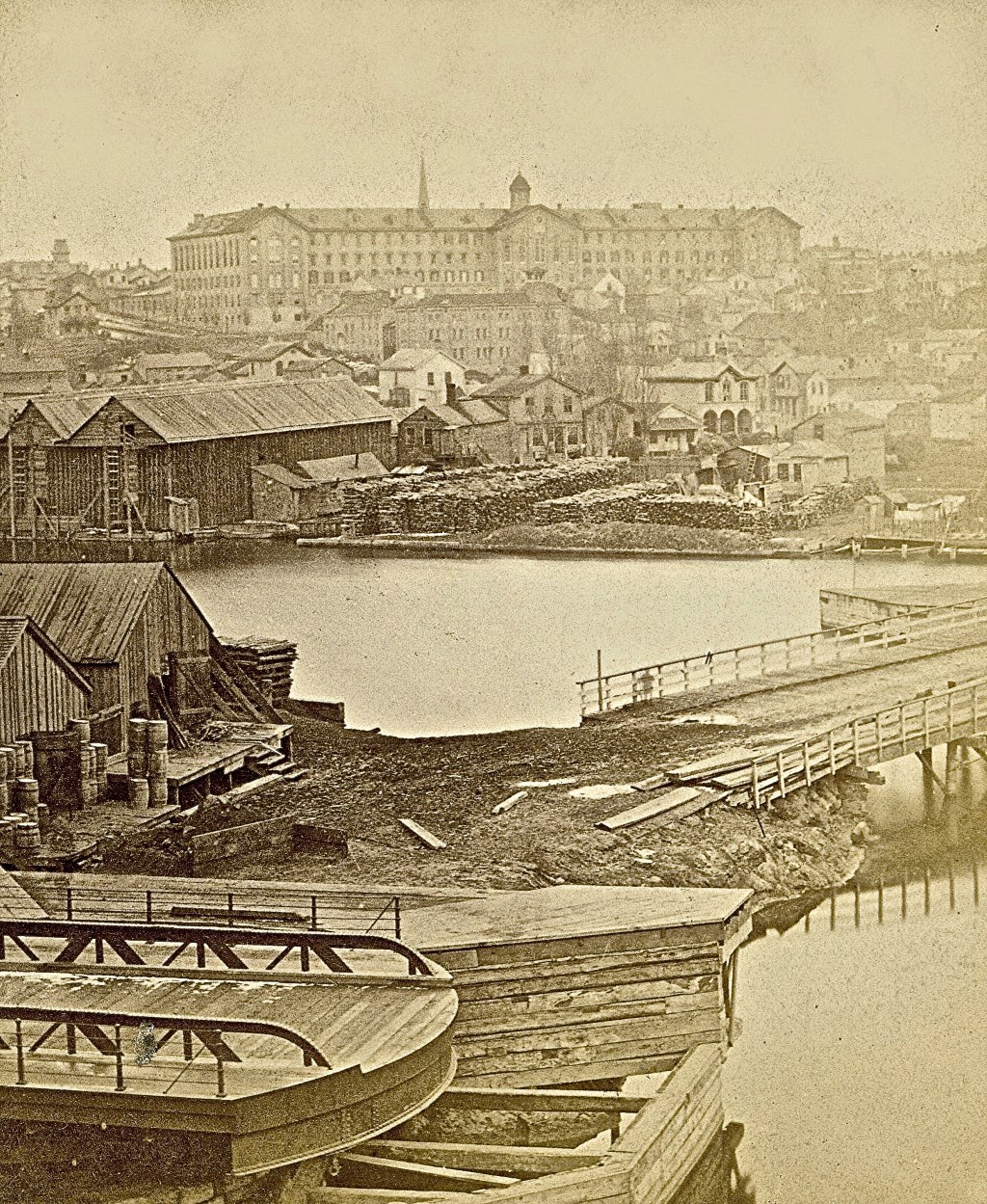 The last photo in this series on the Milwaukee & Rock River canal is of a section which first began planning in the late 1830s. This photograph is a stereoview, circa 1870. This is at the southern terminus of the ill-fated canal, located approximately where the Cherry St. bridge now stands.

This is a view of the Point St. bridge. The shed in the left foreground is actually on a small island created by the canal. It is connected to the end of a wooden swing bridge, turned to accommodate boat traffic. Across the river is a busy sawmill, but the dominant brick structure here — at the top of the photo — is a convent.

“Under her leadership, the convent at 1324 N. Milwaukee St. grew from ‘a little pioneer home hidden under mighty trees’ to the ‘house with four chimneys’ to a massive red brick complex that dominated the lower East Side skyline.” The original convent building from 1850 was incorporated into the one you see in this stereoview, which is a later and far larger structure. This is the west facade, which was constructed between 1852 and 1862. This section of the convent housed the St. Mary’s Institute, a boarding school for young ladies.

The convent’s chapel “contained more than 5,000 authenticated relics of saints, and its infirmary was marked with a mammoth stone crucifix that stood for 100 years,” Milwaukee Murmur recounts. “For decades, it was one of the largest buildings in the city, and a well-known landmark for navigators. The Notre Dame Convent was not just a place of worship and study, but a finishing school for girls from Milwaukee’s most elite families, including the daughters of Solomon Juneau. It was described as a ‘city unto itself,’ housing not only students, but over 150 nuns (active, retired and infirm.) The sisters were totally self-sufficient, serving as their own chefs, gardeners, bakers, cobblers, seamstresses, barbers, printers, and musicians.

“On June 17, 1873, a ‘supernatural miracle’ was reported here when a 19-year-old girl in the final stages of consumption was totally healed by the appearance of the Virgin Mary.”

The school, however, would close in 1886 and was converted for other convent purposes. The sisters would open a second school in Prairie du Chien in 1872 that would become the predecessor for Mount Mary College (now University) which would relocate back in this area in 1928.

But the convent remained at this location until it was demolished in the 1950s and the nuns were relocated to another of their convents in Elm Grove, WI. “When the Sisters built the $6 million Notre Dame of the Lake in 1957 – now the home of Concordia University in Mequon – their 106-year-old convent was left behind,” Milwaukee Murmur recounts. “Incredibly, this majestic old building became a symbol of ‘blight’ and a target for modernization. Workmen surveying the building in 1958 were struck by the pristine condition of the convent interiors, which were decorated in European hardwoods, elaborate marbles and ancient stained glass.” Yet the entire complex and everything in it, “including the fountain and all of the wrought ironwork, was destroyed and sold for scrap.”

By 1960, a home for the elderly named “Convent Hill” arose at this location. Some of the old convent’s bells do survive and are sheltered in a small tower on the site. That – and a history display in the lobby — are all that now remain of the once huge complex envisioned by Mother Caroline.