By Brendan O’Brien, Milwaukee Neighborhood News Service - Aug 30th, 2016 10:10 am
Get a daily rundown of the top stories on Urban Milwaukee 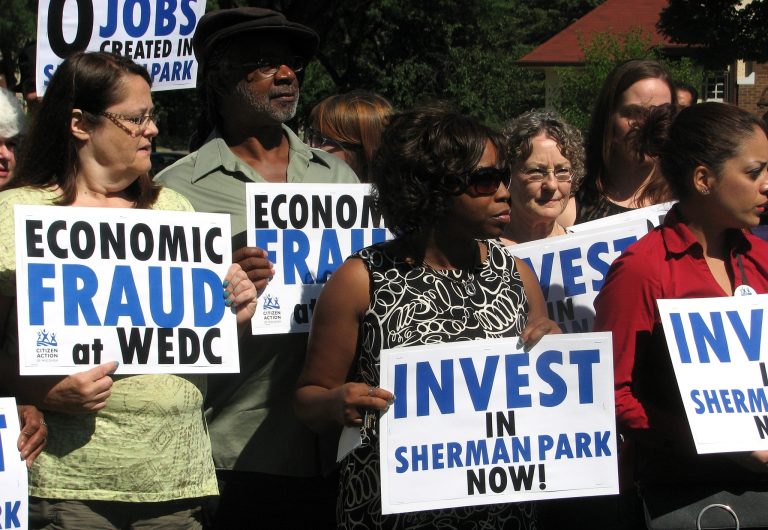 Sherman Park residents call out the Wisconsin Economic Development Corporation for inaccurately reporting the number of jobs it has created in their neighborhood. Photo by Brendan O’Brien.

A state agency is being accused of inaccurately reporting the number of jobs it has helped create in Sherman Park, a neighborhood struggling with poverty, crime and its relationship with police — issues that came to a head two weeks ago when riots broke out after a black man was shot and killed there by a Milwaukee police officer.

Mapping data generated on the Wisconsin Economic Development Corp. website showed the agency, which is tasked with creating jobs and attracting businesses to Wisconsin, has helped create 483 jobs in Sherman Park since its inception in 2011, according to Citizen Action of Wisconsin.

But the organization found WEDC’s mapping data is inaccurate. In a statement released to Citizen Action, WEDC officials said they do not have any idea how many jobs the agency has helped create in the predominantly black neighborhood, where a third of residents live in poverty.

“There is no secret that Sherman Park and the whole North Side is in desperate need of economic opportunity,” said Robert Kraig, director of Citizen Action of Wisconsin, during a recent news conference at the corner of Sherman Boulevard and Meinecke Avenue. “There has been a lot of discussion about what happened in Sherman Park… and how it relates to that lack of hope and that lack of opportunity.” 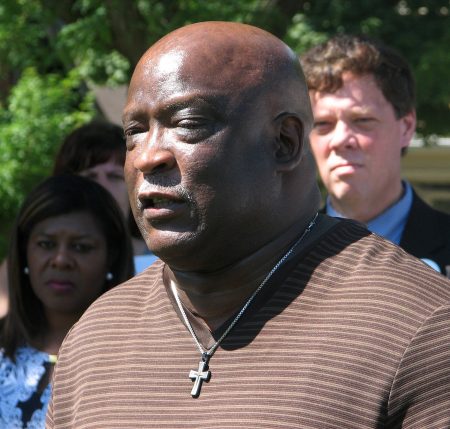 The Rev. Willie Brisco, president of MICAH, speaks during a Citizen Action of Wisconsin event calling for more jobs in Sherman Park. Photo by Brendan O’Brien.

WEDC said in a statement that the allegation by Citizen Action is “false and misleading” and that the agency never claimed to have created a specific number of jobs in the Sherman Park neighborhood, as Citizen Action “falsely contends.”

“WEDC is fully committed to seeing the city of Milwaukee succeed economically,” according to the statement.

The accusation comes at a delicate time for Sherman Park. The neighborhood was thrust into the national conversation regarding use of force by police and economic inequalities blacks face in inner cities across the country after a Milwaukee police officer shot and killed Sylville Smith on Aug. 13 during a traffic stop in the neighborhood. The shooting ignited two nights of violent protests in which six businesses being burned to the ground.

“We have deception and we have lies … that we have jobs being created when they are not and communities are being served when they are not,” said the Rev. Willie Brisco, president of Milwaukee Inner-city Congregations Allied for Hope (MICAH). “We have people with nothing to do and time on their hands and then all it takes is a flicker to set off what happened in Sherman Park.”

To determine the number of jobs the agency has created, Citizen Action used the WEDC’s online mapping tool that plots businesses that the agency has awarded tax credits, loans and grants in an effort to create jobs and spur the state’s economy. When the physical address data cannot be precisely plotted, such as when a P.O. Box number is provided, the map generates an approximate location, the agency said.

For instance, Saelens Corp. is listed as a job creator in Sherman Park, but according to its website the business has locations in Johnson Creek, Wisconsin and on the far west side of Milwaukee. Another business, Merge Healthcare Inc., is actually located in West Allis, according to Google Maps. The third business, Novation Companies, is based in Kansas City, Missouri. It is unclear what presence the three businesses had in Sherman Park since they received subsequent to receiving tax credits during the last five years.

“It is utterly ridiculous,” said longtime Sherman Park resident Liz Walker, who called for stronger controls over job creation incentives and more economic development in Milwaukee as she watched the news conference.

According to U.S. Census data, Assembly District 18 is home to more than 5,000 unemployed adults, many of whom live in Sherman Park, making the 500 or so jobs that WEDC may have created woefully inadequate, Kraig said.

According to Kraig, the agency created by Gov. Scott Walker has no strategy to create jobs in Milwaukee, where thousands of jobs are needed and where one in every five black adults is unemployed.

“WEDC has failed Milwaukee and Sherman Park tremendously,” State Rep. LaTonya Johnson said. “The lack of investment, job creation and economic development by the state of Wisconsin and WEDC is a huge factor in the inner city of Milwaukee and is why Milwaukee is feeling neglected, forgotten, overlooked, disenfranchised and discriminated against.”

One thought on “Did State Create Jobs in Sherman Park?”