Plus a new sandwich and small plates deli in Bay View. 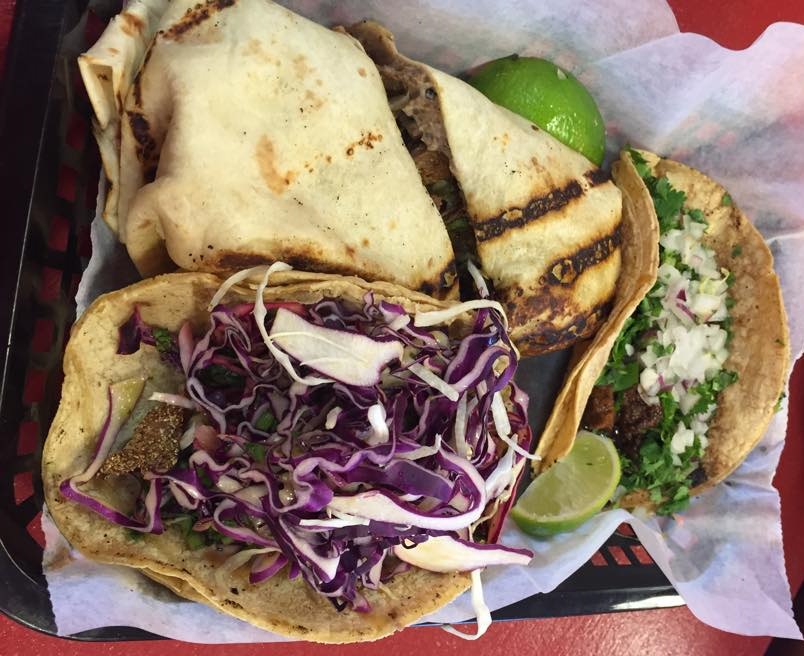 Perhaps the best gas station area for dining in town has a new place: Taco Bandito opened last week at 605 S. 1st St., in the Mobil plaza. It took over the space left by Cafe India when it moved to the larger storefront in the plaza. Taco Bandito is a counter-service Mexican restaurant with some tables as well for customers who want to dine in rather than get takeout. It’s owned by Roman Torrez, who previously operated Mr. Webo Mexican restaurant at 2301 S. Howell Ave. in Bay View, from 2013 to 2014. Milwaukee Journal Sentinel writer Carol Deptolla has all the details:

Taco Bandito’s hours are 11 a.m. to 10 p.m. Sunday to Thursday and 11 a.m. to midnight Friday and Saturday. In a few weeks, Torrez said, the restaurant will stay open until after bar time on the weekends.

After a few successful weeks of pleasing the dinnertime crowds, chef Heather Terhune of Tre Rivali is now serving lunch from Monday through Friday from 11 a.m. to 2 p.m. Whether you prefer to enjoy your midday meal on the sidewalk patio or inside the restaurant, you will have plenty of options to choose from. Tre Rivali can be found at 200 N. Broadway St. in Milwaukee, inside the Kimpton Journeyman Hotel. Milwaukee Magazine’s Ann Christenson previews the menu:

The lunch menu has a bit of overlap with dinner, in that it also offers pastas (carbonara, $17, mascarpone cheese ravioli, $17 and the pasta pictured  in the photo above), wood-roasted pizzas and entrees like grilled swordfish, creamy corn flan and curry roasted carrots ($25). Other items: shaved celery and escarole salad ($9); tomato and cucumber fattoush ($16); slow-roasted pork sandwich ($15); burger with fontina, bacon jam, pesto aioli and a sunny side-up egg ($16); and a lentil-scallion veggie burger ($13).

Next to come is Saturday-Sunday brunch service, expected to begin the weekend of August 27.

Mara’s Grill, 3441 N. 84th St., opened in December but has gotten little coverage. It’s owned by husband and wife Mara Taracena and David Hernandez, located in the building once occupied by Mack’s Southern Sweets & Cafe, and may be the only restaurant in town serving Guatemalan dishes. Hours: 11 a.m.-9 p.m. Tuesday-Saturday, 11 a.m-8 p.m. Sunday. Deptolla offers a rundown on the food:

There’s an especially fine version of chile relleno ($10.50), roasted poblano pepper fried in an airy egg batter; the pepper is plump with cheese and, for an extra dollar, with bright green, tender spinach (or with chicken). It’s draped in chipotle sauce and sprinkled with crumbles of queso fresco, served like all entrées with seasoned rice and flavorful refried beans. Occasionally, Taracena makes it with jalapeno, as it would be in Guatemala.

Chicken pipian ($10), probably Guatemala’s best-known dish, is a generous plateful here. Moist chunks of chicken are tumbled in the brick-red mole sauce that gets its color from roasted tomatoes and chiles and its substance from ground pumpkin and sesame seeds.

Chicken also is served in a brown, sweet mole made with ground peanuts ($10). Both chicken dishes are served with tortillas to swoosh through the sauce, as well as rice and beans…

Mexican plates include several kinds of enchiladas, including mole with chicken ($9.75) and spinach with mushroom in red sauce and a blanket of melted cheese ($10). Burritos, chimichangas and tacos fill out the menu alongside sandwiches ($7 to $9) served with crisp fries, such as burgers, grilled cheese on sourdough and pulled pork.

A new grocery store and restaurant is set to open soon in Bay View at 2671-2675 S. Kinnickinnic Ave. Bumstead Provisions has officially set an opening date for Sept. 19. The owners of the project also own and operate the Craft Cow in Oconomowoc. Co-owner Mike Bedow says the new digs will be where a “mid-century general store meets 2016 culinary trends.” Melanie Lawder of the Milwaukee Business Journal adds:

The 3,000-square-foot Bumstead Provisions will feature a restaurant serving sandwiches, small plates and chef board, as well as a grocery and deli.

“I think people don’t know what to expect out of it and we’re really coming full force,” Bodow said. “We are bringing in a lot of really cool boutique products, stuff you don’t just seen on shelves at most grocery stores.”

Located in the former True Value Hardware and ReThreads clothing stores, Bumstead Provisions will be open 9 a.m. to midnight on weekdays and 9 a.m. to bar close on weekends.

Some big changes have been made at Irie Zulu in Wauwatosa recently. The African and Jamaican themed restaurant at 7237 W. North Ave. has launched a new menu for customers to explore. The owner, Yollande Deacon, also increased the seating capacity of her restaurant this summer to fit 14 people. Christenson dishes the details: