Boswell hires security guards, but book talk was dull affair, it turns out. 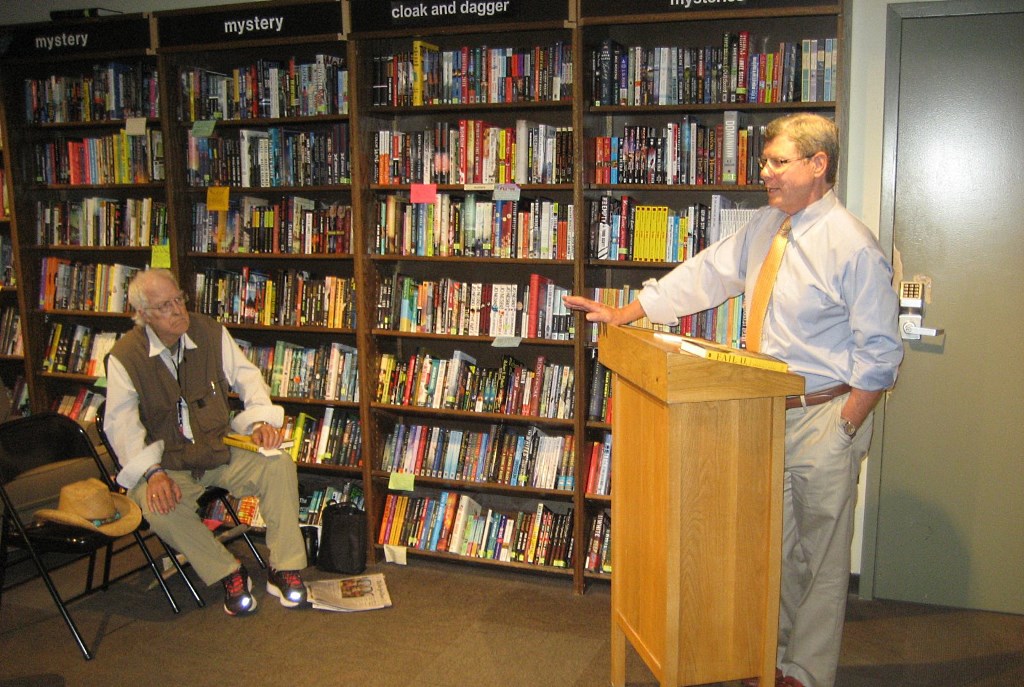 In a Facebook post on June 28th, Charles J. Sykes gave readers a teaser about his upcoming book, “Fail U: The False Promise of Higher Education.”

“Higher education is a bloated, costly scam. It’s time somebody exposed it. (Again.)”

Those are fighting words on the East Side where many UW-Milwaukee professors live and congregate, and you might have expected heated reactions to Sykes’s talk last week Thursday at Boswell Book Company, 2559 N. Downer Ave., to stand up for what he called his “I told you so book.”

“I know it’s obnoxious to say ‘I told you so,’ but I think I will be saying it a lot this year,” Sykes told the slim crowd of 20 or so attendees at the event. A couple security guards hired by the book store were also on hand, given them the rare chance to be enraged about higher education, though their somber mien gave no sign of such occurring.

Sykes’s latest indictment of the national higher education system follows his previous works like A Nation of Victims, Dumbing Down Our Kids, The Hollow Men, The End of Privacy, and 50 Rules Kids Won’t Learn in School.

But it was his first book Profscam: Professors and the Demise of Higher Education, published 28 years ago, that helped provide a platform for his current work as the WTMJ-AM talk radio host and Senior Fellow of the Wisconsin Policy Research Institute, the latter largely funded by the conservative Lynde and Harry Bradley Foundation.

In an unusual two-person live chat with Dan Bice of the Journal Sentinel in January, 2015, Sykes talked about his father Jay Sykes, a professor and inspiration:

“My first book, ‘Profscam‘ was based on a piece Jay wrote titled ‘The Sorcerers and the 7 1/2 Hour Week,’ which was a highly critical look at the university culture,” said Sykes, whose own work schedule, 3,5 hours each weekday, is a full ten hours more per week than the slacker professors cited by dad.

In Profscam, Sykes placed the blame on teachers: ”The professors – working steadily and systematically – have destroyed the university as a center of learning and have desolated higher education, which no longer is higher or much of an education,” he wrote in 1988.

“Nothing has changed. Everything is worse,” Sykes told the attendees.

Paying to send your college-bound kid to “a private school is like buying a BMW every year and driving it off the cliff,” Sykes said, alluding to what he called “personal experience” with the situation.

Sykes then summarized his book:

In short, he said, “Too many pay too much for too little.”

The most “radical question,” Sykes said, is “why four years to get a degree? Why not three years?”

Sykes cited Massive Online Open Courses (MOOCS) as a model. You could get online certificates for Economics at Stanford, English at Yale, something else at Princeton. You could do it all from home, and even listen to AM talk radio in the background as you did so.

Sykes said he hoped for a day when some major corporation would look favorably upon an applicant with a lot of MOOCS yet no sheepskin.

MOOCS strike at the “heart of the business model” of higher education, Sykes said.

And could open up many opportunities for private businesses to wrest control of the higher education racket from the grips of tenured bureaucrats. This is, not coincidentally, one of the goals of the Bradley Foundation and of the WPRI.

Sykes then opened the meeting to questions, “provided they are not about Donald Trump,” he said, earning a nervous laugh from the crowd.

There were no hardballs forthcoming as there might have been a few weeks hence when UWM is back in session, and when tenured professors with plenty of time on their hands could pepper Sykes with learned invective, so I considered this game over and took my leave.

Not at the Pence Event

Sykes was attired in a powder blue button-down collared shirt, Khaki pants and brown loafers. The look could be described as “preppy,” which term has a suitably academic background, since it derives from a clothing style associated with private “college preparatory schools.” No MOOC clothing (would that be PJs?) for Charlie.

In the audience was suspended Marquette University professor, embattled conservative John C. McAdams. Sykes acknowledged his presence, and said a section of his book was “retrofitted” to cover the McAdams dispute with the Jesuit university.

Under ordinary circumstances, meaning a presidential election year without Trump,  Sykes might have rescheduled the reading, since  many conservatives would have wanted to be downtown at the Hilton to hear an address from the Vice Presidential candidate Mike Pence, whose speech took place at the very same time as the book launch. In fact, judging from the look of the crowd, many of the attendees would ordinarily have skipped Sykes for a visit with a potential Republican vice president. Not this year! 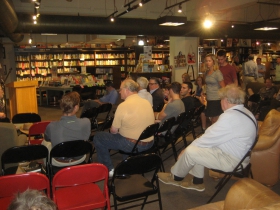 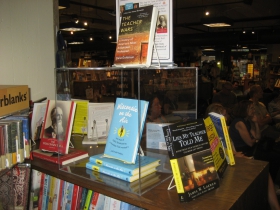 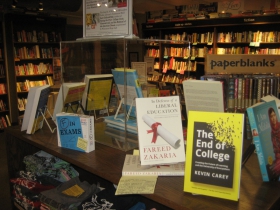 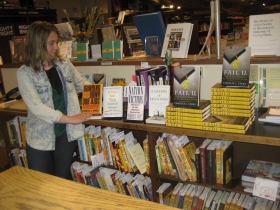 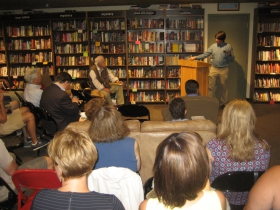 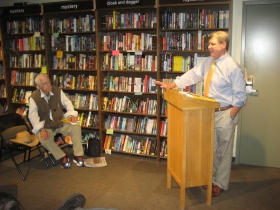 Having attended other Boswell talks, which have never included security, I wondered about the two uniformed security guards patrolling the premises. I asked owner Daniel Goldin via e-mail about it.

His response provides an interesting glimpse into the workings of book marketing in a charged political environment:

“I didn’t know what the reaction to Mr. Sykes’s presentation would be and wanted to be prepared,” he wrote. “We recently needed security for a Youtube personality because she was being stalked. Another independent bookstore we work with was disrupted during a talk from a Democratic politician by folks angry at a policy. I read some of the reactions to the author [Sykes] on Twitter and it got me nervous. I was as much concerned from folks protesting Sykes’s thoughts about higher ed as I was for folks who are angry with his comments against Trump.

“You should know that Sykes did not ask for this support, nor did his publisher. It was my decision. We are well aware that our neighborhood leans left. I should note, however, that both our customers and staff hold a variety of opinions on a wide range of issues. We try to follow the tradition of David Schwartz and his father Harry who had books that represented multiple viewpoints on issues, and in fact also brought in speakers from multiple perspectives. When Patrick Buchanan spoke at Schwartz, he brought his own security person.

“Do we say yes to every event request? No. But I am one who believes in dialogue, and that the city, country, and world would be a better place if we were willing to hold a civilized dialogue with people who disagree with us. I understand this is simply not always going to be the case, but we can dream, right?”

Audio Version Read by Another

Despite being a radio voice for over two decades, busy Sykes allows another to voice his audiobook of Fail U.

That role is played by Michael Butler Murray, the actor perhaps best known for his performance in the movie Jersey Boys.

Murray must have a good deal of time on his hands, since the full, unabridged reading is an 8 hour and 26 minute audio book. Other Michael Butler Murray audiobooks:

Correction: An early version of this story erroneously suggested Michael Grebe attended the reading. We apologize for the error.