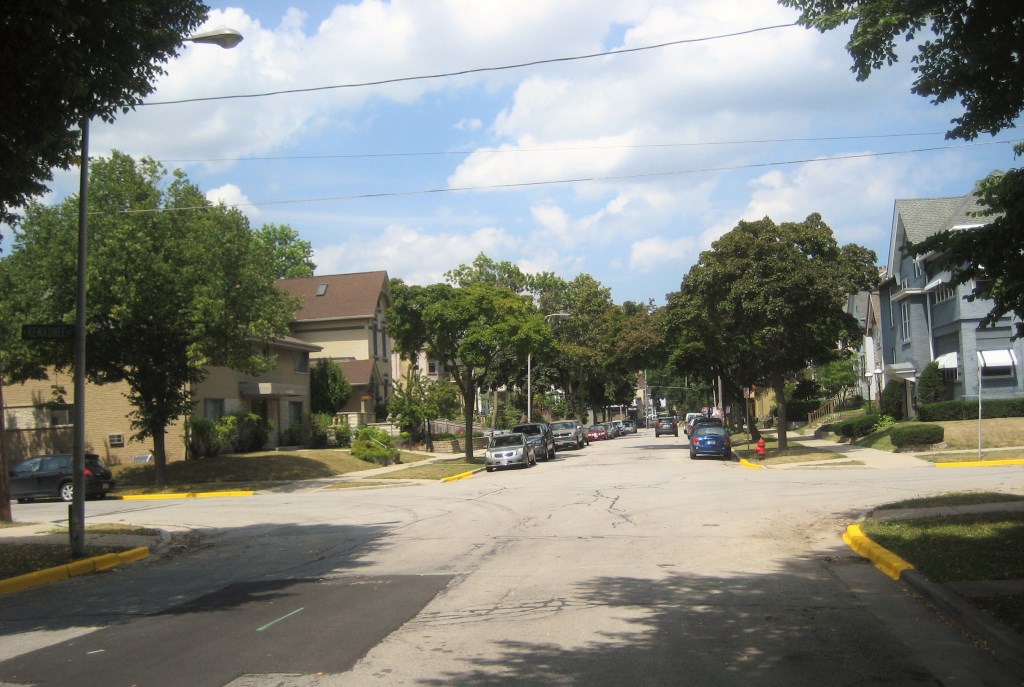 Four workers are busy this month painting 15 foot long yellow stripes on curbs in high-priority areas of Milwaukee, in what is believed to be the city’s first adoption of a common practice in other cities — to denote “no parking” zones near intersections and crosswalks

The motivation was “to heighten awareness of the law that you must park at least 15 feet from a crosswalk,” says Department of Public Works Commissioner Ghassan Korban in a telephone interview.

“Not everybody knows that 15 feet is the law,” Korban says, adding drolly that, “not everybody knows what 15 feet is.” Well, if you can see yellow, you’ll know now. But what was the motivation to undertake this labor-intensive activity? (Unlike mechanical lane striping, this is done by hand, using brush and roller.)

The department was not facing “a defiance issue” in many of the violations, Korban’s studies showed, “but a lack of knowledge,” so his staff undertook what he called a systematic search to find the areas where such citations were most frequently issued, and to paint the curbs to heighten awareness.

Among the first to be painted were intersections of N. Astor St. at E. Kewaunee and E. Pleasant streets, just south of Glorioso’s Italian Market on E. Brady St.

Not surprisingly, this little stretch of the Lower East side, abundant with 19th century homes, yet practically barren of alleys or garages, was considered “low-hanging fruit,” Korban says.

His crews are also looking for intersections with “no clear delineation of crosswalks,” he notes, and the intersections above meet that description. Korban did not have a figure for how many intersections will be painted by the end of the year.

In other parking news, Korban’s department bought four bicycles and trained some of its uniformed troops to perform their office on two wheels beginning last month, as part of a shift in parking strategies.

And it will no longer be proper protocol to refer to many of the Parking Operations Division’s 117 full time employees as “Parking Checkers,” Korban says. 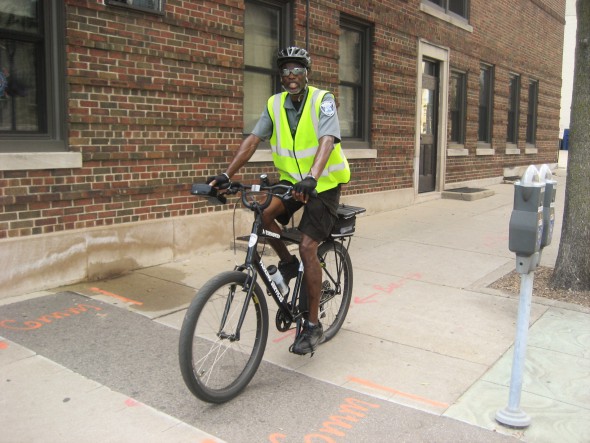 “We are changing the image of Parking Checkers to “Parking Ambassadors,” Korban says, so please amend your phrasing. The goal for the bicycle-mounted “ambassadors” is to make these employees “more connected” with the customers.

Korban says the bicycle staff can more readily offer parking information and advice (where do I charge my electric car?) and assist with broken meters, or other street-level issues than could their Jeep-driving brethren. There is something intimidating about addressing a uniformed officer in a vehicle, unless you’re barking out orders to your chauffeur from the back seat.

There are other considerations, as well, he notes. For one thing, the enforcement patrols, as their labeling (“This Vehicle Makes Frequent Stops”) suggests, often tie up traffic on busy narrow streets like Brady Street where many parking infractions occur. They are also travelling billboards of ill-will as their drivers issue 700,000 tickets per year, almost always one step ahead of you, it seems.

It doesn’t help matters when the enforcement vehicles themselves would park in intersections or no-parking zones and then issue tickets for the same infraction, which Korban admits could be viewed as “hypocritical.”

On the other hand, you could see the white vehicles with their flashing yellow lights coming from a good distance, giving you at least a chance to put up a spirited protest.

These bike ambassadors will be much harder to spot.

Korban said the bicycle patrols will be used “in the downtown area where it makes more sense.” This includes Brady Street.

The patrols will certainly be cheaper than the equivalent motor vehicles, and Korban says there “will be a health benefit” for the bicyclists as well. Indeed.

Parking is Big Bucks for City

The City of Milwaukee Department of Public Works Parking Operations Division” is a $45 million operation that administers the Overnight Parking Permit Program, the City’s Towing Program, and Parking Enforcement Operations.

Prominent on its list of objectives is to “ensure the best possible customer experience,” even for those whose automobiles are among the 27,000 towed each year, or those who receive one of the 700,000 parking tickets issued annually.

Also on the list of objectives: “Maintain a sustainable annual transfer to the general fund of $15 million,” for the purpose of offsetting property taxes.

Looked at another way, the Parking Operations Division is a $45 million “Enterprise Fund” that issues a 37.8% annual dividend. Who says governments can’t make money?

In addition to all of those pesky tickets (the city issues 1.16 citations per capita annually) that generate $17.5 million, and the towed vehicles that bring in $4 million, the division also receives non-punitive revenue to fill its coffers.

The division is headed by Preston Cole.

2 thoughts on “Plenty of Horne: City Department Paints the Town”