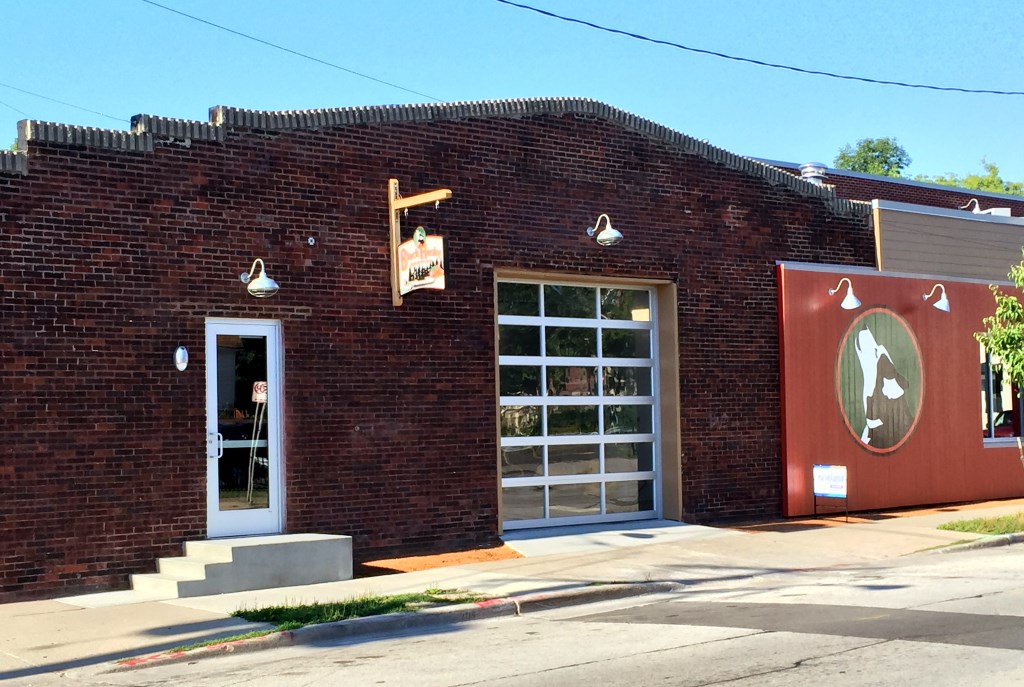 After a change of locations, Black Husky Brewing and taproom will be open to the public on Wednesday, Aug. 3. The brewery was previously located in Pembine, a small town in northern Wisconsin, but has moved to 909 E. Locust St. in Milwaukee’s Riverwest neighborhood. Owners Tim and Toni Eichinger made sure the Black Husky brand would be proudly donned throughout the restaurant, including a woodcarving by Rhinelander artist Cheryl Campbell. Lori Fredrich of OnMilwaukee.com details the transition:

Although the new brewery will allow Black Husky to increase production in a move from a three to 10-barrel system with 20-barrel fermenters, the Eichingers say they’re not looking to push their capacity in any big ways. And the taproom, they note, will simply provide a place for them to share what they’re making with others.

The focal point in the taproom is a hand-constructed log bar, which seats about 16.

Although the taproom doesn’t have a kitchen and won’t serve food, the Eichingers say that they’ll allow folks to order out for food or bring carry-ins if they’d like.

A new food truck will soon be found on suburban streets throughout the Milwaukee area. Firewise Barbecue Co. plans to serve all kinds of Kansas City inspired barbecue items under the ownership of Alex Obradovich. Menu options vary from sandwiches, ribs and an array of side dishes such as coleslaw, corn bread, baked beans and potato salad. Carol Deptolla of the Milwaukee Journal Sentinel reports:

Firewise Barbecue Co. will sell pork spare ribs and sandwiches made with one-third pound of beef brisket, pulled chicken or pulled pork, all smoked with mainly apple and cherry wood — “kind of a mild smoke flavor; it’s not overwhelming,” said Firewise owner Alex Obradovich. The meats will be prepared with a dry rub and served with sauce on the side.

A four-meat sampler will be on the menu, as will nachos topped with a choice of meat and side dishes including baked beans, a mustard potato salad, coleslaw and corn bread.

Obradovich, who lives in West Allis, plans to park the Firewise truck at mainly suburban locations from 11 a.m. to 6 p.m. Tuesdays, Wednesdays and Thursdays. The weekends will be spent at festivals and catering events.

An increased rent has unfortunately caused The Philly Way to close at 405 S. 2nd St. The building has been purchased by Paul Spencer, who plans to find tenants who would like to renovate the space for another restaurant. The Walker’s Point cheesesteak stop first opened in 2000, with two other locations operating (but now closed) on Brady Street and in Cudahy. The owner, Dave London, spoke with Fredrich about the closing of his restaurant:

“We’ve been in this space for the last 16 years,” he says. “We were one of the first restaurants in Walker’s Point, and we’d love to stay here. I’ve reached out to the new owner of the building to try to negotiate, and he just wouldn’t hear it.”

London says he’s been scouting for a new location for the Philly Way business, which he plans to reopen as soon as he can.

“We’ve had such an outpouring of support on our Facebook page since we announced the news,” he says. “We don’t know that we’ll be able to stay in Walker’s Point, but we’re looking for the right place so that we can re-open.”

According to a report by Milwaukee Magazine, Red Dot’s East Side location has closed. The restaurant and bar, known for wings and Canadian-style poutine, officially broke the news on Facebook on July 14. Owner Martin Beaudoin is selling the building and business to concentrate solely on the Wauwatosa Red Dot location. OnMilwaukee.com’s Fredrich adds more:

Red Dot arrived on the scene in 2005 after Beaudoin, a former semi-professional skateboarder, made the decision to purchase the old Calderone Club Restaurant at 2498 E. Bartlett Ave.

The Wauwatosa location at 6715 W. North Ave., which originally opened in 2012 as The Sherbrooke, took on its identity as the second location for Red Dot in late 2013.

The seafood chain McCormick & Schmick’s has closed at Mayfair Mall in Wauwatosa. The building, already stripped of signage, is located at the north end of the mall outside Macy’s. Deptolla details the closing:

According to a statement from a spokeswoman, owner Landry’s Inc. closed the restaurant when its lease expired. She wouldn’t say why the restaurant did not to renew its lease.

Houston-based Landry’s has closed a number of McCormick & Schmick’s restaurants since acquiring the company in 2012, but it still has 59 restaurants in 21 states and the District of Columbia, including five restaurants in metropolitan Chicago.

Houston-based Landry’s also owns about 50 other chains, including Claim Jumpers, formerly at Brookfield Square, and Mitchell’s Fish Market, one of which is in Brookfield.