Ald. Witkowski's initiative urges people to give to charitable groups, not panhandlers.

By Rebecca Carballo, Milwaukee Neighborhood News Service - Aug 1st, 2016 06:18 am
Get a daily rundown of the top stories on Urban Milwaukee 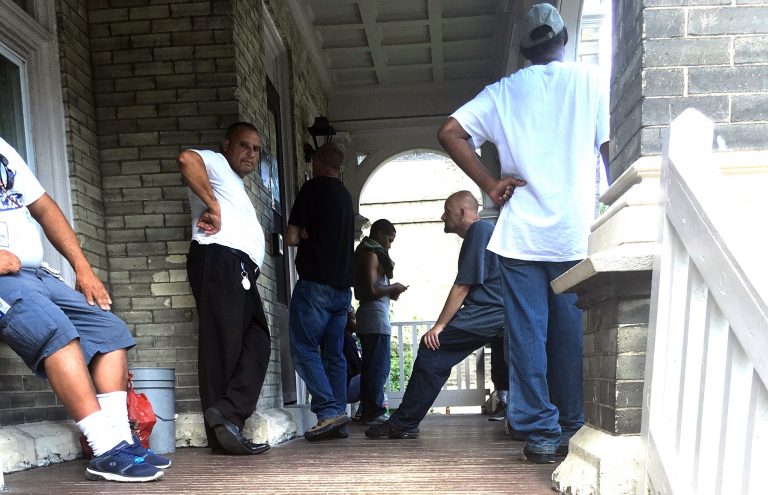 Homeless men wait to shower at St. Benedict the Moor Parish, which offers a variety of services such as a free meal program and a shower program. Photo By Rebecca Carballo.

Signs reading “Keep the Change” have been appearing in windows of businesses throughout Milwaukee, advising patrons not to give money to panhandlers. The fliers are a result of the Keep the Change initiative adopted by the Milwaukee Common Council on March 1.

The program encourages donations to nonprofits that serve the homeless and other people in need. “When you Keep the Change, you can help that person make a real change in his or her life,” according to the council’s website.

Tim Schwab, who has been homeless for six months, is not happy about the program. He said he was able to feed himself with the spare change given to him on the streets. “If you have extra change that’s going to fall between your car seats anyways, why not help somebody?” Schwab said. “Fifty cents can go a long way.”

Although the initiative discourages it, panhandling is within the law. Aggressive panhandling, defined as following someone and demanding money, is illegal, but asking for money verbally or silently with a sign or a container — is within an individual’s First Amendment rights.

Schwab said it is a common misconception that homelessness is a result of addiction, and that panhandlers will use the money for drugs. 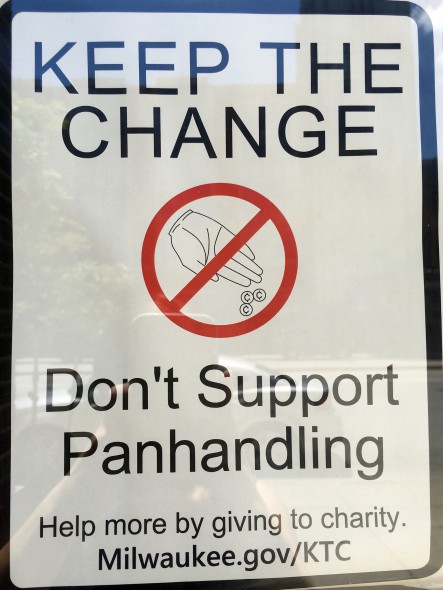 “(The city) can’t just assume where the money is going to,” Schwab said. “Some people are without a job and trying to get work. I don’t think it’s (the city’s) right to say who someone can give money to. It’s a person’s choice.”

Alderman Terry Witkowski, who sponsored the initiative, encourages residents to donate to charity instead of giving the money to a panhandler.

“Seventy percent of panhandlers are not homeless, according to the Milwaukee Police Department and the District Attorney’s Office,” Witkowski said.

Witkowski also noted there is no guarantee how panhandlers would spend the money. “Your money isn’t going where you think,” he said.

The initiative’s website recommends making contributions to 18 organizations that provide food, shelter or other services to people in need.

Milagro Jones, a South Side resident who was formerly homeless, said he has benefited from some of those organizations, including Cathedral Center, Inc., Guest House of Milwaukee and the Salvation Army.

Jones attended meetings about the initiative and said he was taken aback when he first heard about it.

“It’s my natural inclination to help someone out,” Jones said. “I thought my direct donation would be helpful.”

Although Jones said he sees why business owners do not want panhandlers near their stores, he also remembers a time when he was the one asking for a dollar.

“I understand where the program is coming from and this issue needs to be addressed,” Jones said. “If people don’t like the solution the city came up with, be creative and make a better one.”

“The message isn’t ‘don’t help people,’ but simply handing them money is not the means to do that.” Krahenbul recommends offering a sandwich or water rather than money.

Carol McLain, director of resource development at Cathedral Center, said organizations such as hers — which provides emergency housing, workforce development and case management services — can better serve the homeless in the long run than giving people spare change.

“We end homelessness one life at a time; that’s our mission,” McLain said. “Giving money (to panhandlers) isn’t going to solve the problem.”

She added, “We can do more than someone giving five dollars on a street corner.”

Sarah Pollack, partnerships and communications manager at Meta House said some donors have mentioned the initiative and they seemed informed.

Also, business owners and customers said they have noticed a recent decline in panhandling. Vijay Swearingen, owner of Pita Brothers at 1616 W. Wisconsin Ave., attributes that to the Keep the Change sign he displays at his restaurant.

Police Officer Gary Bray, a Pita Brothers customer, agreed that there have been fewer panhandlers on Wisconsin Avenue in the past year.

Bray keeps an eye out for aggressive panhandling, but he noted that it’s important that panhandlers have access to resources they need. “We’re not there to ticket someone,” Bray said. “We try to give them information (about) resources that can help them.”

Alex Deets, a rising junior at Marquette University, said he has been asked for money up to three times during one walk on campus.

“I can tell on their faces that they are not using the money for food,” Deets said. “It’s frustrating because you want to help somebody but that’s not the way to do it.”

He added that panhandlers do not discourage him from patronizing certain businesses. “It’s just a reality you have to deal with,” Deets said.

Craig Braaten, the café’s owner, said the fliers may be influencing his customers.

“I don’t think fliers will stop panhandling, but maybe it will stop people from giving them money,” Braaten said.