Schools With Low-Income Students Can Succeed

But they tend to be charter schools. Will Abele use OSPP to create more?

County Executive Chris Abele has repeatedly pronounced that he didn’t ask for authority over the Opportunities Schools Partnership Program (OSPP). This recently enacted state legislation gives the Milwaukee County Executive the responsibility to appoint an OSPP commissioner and transfer a limited number of poorly performing schools from Milwaukee Public Schools to the commissioner. As a result of the inability to reach an agreement with MPS leaders on the shape of the program, Abele’s chosen Commissioner Demond Means recently resigned.

In light of the abuse he has received for his acceptance of the program, Abele may be tempted to let it drop, in essence daring the Republican legislators to follow through on their threats to cut the MPS budget or otherwise punish Milwaukee. And even if the various threats don’t materialize, enrollment in MPS is likely to continue its long-range decline.

The MPS counter-proposal was for an early-childhood program located in the former 35th Street Elementary School. Presumably it would be funded by diverting funds from other Milwaukee County programs, leading to the suspicion that this proposal was designed to be rejected. It seems clear that the MPS board will not support any feasible version of the OSPP.

From the viewpoint of maximizing funding for Milwaukee education, the offer by Abele and Means to explore ways for MPS to count enrollment in OSPP schools makes a lot of sense. Students counted as MPS students bring the greatest amount of funding. This includes “non-instrumentality” charters — those run by independent entities but authorized by MPS. Lesser amounts go to independent charter schools authorized by other entities such as UW-Milwaukee and the City of Milwaukee (often call “2R” funding for the section of state law authorizing these schools). 2R funding is substantially greater than the per-student voucher that goes to private choice schools.

Under the Abele and Means proposal, MPS would have made a “profit”—the difference between the funding MPS would receive and the payments that would to the schools. This difference could have been used to support additional services to the schools, including the remaining regular MPS schools.

Apparently Abele and Means also expressed a willingness to consider treating the OSPP schools’ staff as employees of MPS. Doing so would in effect make these schools “instrumentality” charters in which the employees would remain members of the MTEA or other MPS unions.

The rejection by the MPS of all versions of the Abele/Means plan makes it likely that any future OSPP will come much closer to the vision of its legislative sponsors—that poorly-performing MPS schools will be removed from the district’s control and turned over to charter school operators. This model also comes close to one of the four strategies pushed by the Obama administration to turn around failing schools: the “Restart Model” in which a school is closed and reopened as a charter school, a model that few school systems nationally have embraced.

One argument often raised against attempts to raise the performance of low-performing schools is that their performance is much more a function of the students’ poverty than of the schools’ themselves. There is a lot of truth behind this assertion: Every school that the state Department of Public Instruction ranks as “failing to meet expectations” has a poverty rate of 60 percent or higher. The evidence suggests that such anti-poverty measures as increasing the availability of transitional jobs, increasing the earned income tax credit, and raising the minimum wage by increasing the stability of families would improve student outcomes.

When carried to the extreme, however, the poverty argument becomes another excuse for inaction. There is a scattering of schools both in Milwaukee and elsewhere that appear to effectively serve students in poverty. Here are the schools which, according to the DPI’s 2013-14 report card, manage to “meet expectations” or better and yet serve a student population of which 70 percent or more are economically disadvantaged. 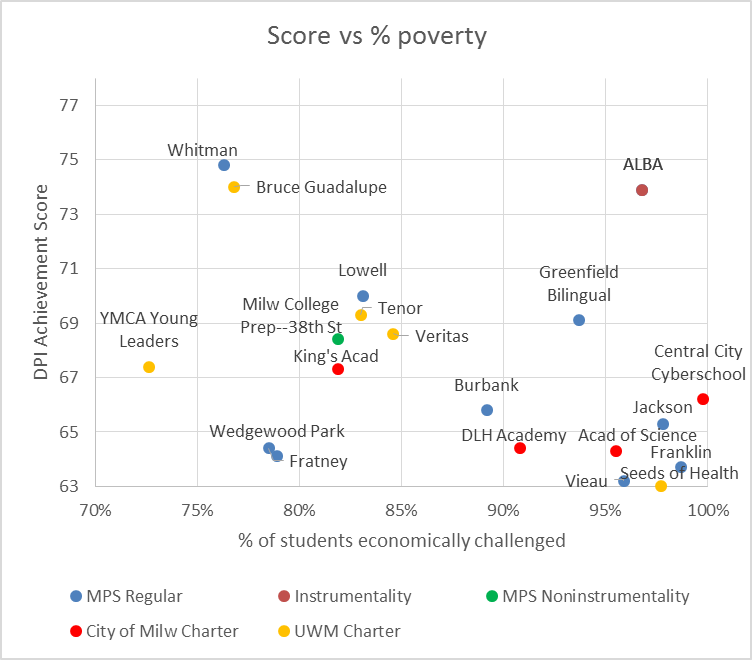 Of the 20 schools that met both requirements, 10 are regular MPS schools. The remaining 10 represent all three Milwaukee authorizers of charter schools: MPS (both instrumentality and non-instrumentality), the City of Milwaukee and UWM. This result shows the legal status of a school does not determine how it performs.

The next graph shows the DPI’s classification of the 126 regular MPS schools in its 2013-14 report cards (the most recent available). 52 were classified as failing to meet expectations—41 percent of the total. What can be done for their students? 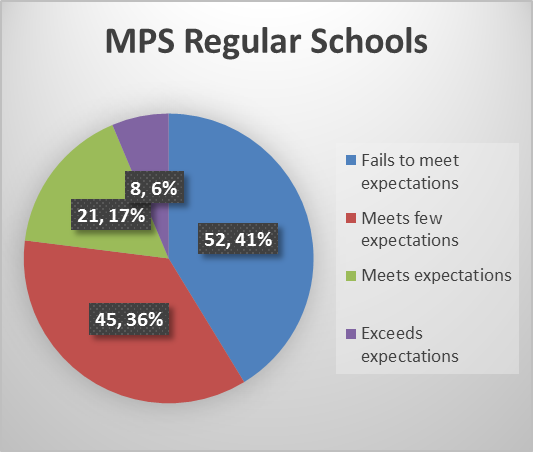 One argument made by groups opposing the OSPP is to point to MPS programs aimed at turning around schools and suggest we wait to see the results of these initiatives. The most prominent of these in recent discussions is Community Schools in which MPS partners with the United Way to offer wrap-around services in the school. The addition of two more schools was recently announced, bringing the total to six. It is too early to judge the success of these efforts. But even if the initial six prove successful, resources may be too limited to allow expansion to a substantial number of school.

The MPS website lists five other initiatives, in addition to Community Schools. Elsewhere it refers to something called Commitment Schools, but it is unclear whether this program still exists. Adding the schools listed for all programs and eliminating duplicates, I calculate a total of 18 schools singled out for some specific improvement efforts. That leaves an awful lot of schools needing help but not receiving it.

Middle-class children have a lot of backup systems if the schools aren’t working for them. For children in poverty the safety net is the school. I believe the education of poor children is too important to be left to school boards, who often are driven by ideology or organizations protecting the interests of adults. (Disclosure: I previously served on the Milwaukee school board.)

If Abele decides to pursue the OSPP, he will doubtless come under renewed attack from the usual suspects. I would argue, however, that these groups have already done their worst against him, and it was not enough.

A bigger concern is the limited supply of effective charter school operators. MPS has seen a decline in both the number and quality of charter school applications, but that may reflect the district’s reputation as being unsupportive of charter schools. Attracting qualified operators is likely to be the biggest challenge for any future OSPP Commissioner.

36 thoughts on “Data Wonk: Schools With Low-Income Students Can Succeed”