City will narrow the road and triple size of sidewalks. Business is booming in response.

A rendering of S. 5th St. Bump-outs will not be added. Rendering by Kyle Gast.

The wave of development in Walker’s Point has been extensively covered, from a grocery store and apartment building that will replace a brownfield on the east to a dilapidated landmark building that was renovated to into apartments on the west. What’s overlooked is the simple infrastructure of Walker’s Point, the streets. In an attempt to support existing businesses and encourage new ones to come to the area, the city is rebuilding S. 5th St. from W. Virginia St. on the north to W. Washington St. on the south.

Most Milwaukeens readily identify S. 5th St. with Mexican food, and for good reason: three of the city’s highest-profile Mexican restaurants are anchors on the street, La Perla, Botanas and La Fuente. In the future, though, Milwaukee might know the street as much for beer as for food. Three breweries have opened on the street: Brenner Brewing, Urban Harvest Brewing Co., and MobCraft Beer, with the latter two opening in just the past month.

According to Department of City Development Long-Range Planning Manager Sam Leichtling, “the reconstruction of S. 5th St. had been scheduled for a number of years and was held temporarily to allow for the completion of the Walker’s Point Action Plan and to build consensus around the vision for the street.” Leichtling notes that the city met with area business owners in the summer of 2015 to select a plan for the street, with the majority of property owners choosing an option that will widen sidewalks from seven and a half feet to 18.5 feet, narrow the roadway and convert the on-street parking from angled to parallel.

Leichtling noted that since the announcement of the reconstruction, a number of businesses have opened on the street including the two breweries, Juiced and the art gallery The Suburban. A number of businesses are also scheduled to open in the coming months, including The Kubala Washatko Architects UrbanLab, a second location for Fuel Cafe, brewery supplier and pilot malting and roasting facility Proximity Malt, a banquet hall for La Fuente and a new home for non-profit arts organization Arts @ Large.

And add another business to the list of those coming to the street, although at the expense of a Walker’s Point institution. News broke yesterday that 600-seat La Perla, owned by JoAnne and Nicholas Anton, would be closing Saturday. The Mexican restaurant, which has called the neighborhood home for 21 years, is being sold. The new owners, which the Antons declined to identify, will use the downtime during the street reconstruction to set up their new business.

To minimize disruption to area businesses during the four-month construction period, the city’s Support for Business Program has identified two temporary parking areas. According to a project document: “The Bradley Technical High School parking lot, South 4th Street and West Bruce Street, will be available 7:00 a.m. to 2:00 a.m., and the United Community Center parking lot, South 6th Street and West Washington Street, will be available after 6:00 p.m. to 2:00 a.m.”

To finance the $2.7 million project, the city will draw $2.425 million from a tax-incremental financing district created for the area with the remainder coming from the Department of Public Works‘ construction budget. The TIF district, which borrows against future incremental property tax revenue to pay for public improvements, will also help pay for Bublr Bikes stations in the area. It is expected to last until 2036.

If the city is even half as successful as it was when S. 2nd St. was narrowed, it’ll be worth every penny spent. S. 2nd St., just a couple blocks east, went from de facto expressway between Downtown and Bay View to Milwaukee’s dining hub in just a few years. Will something similar happen to 5th Street? A number of factors suggest yes, including the large number of new businesses already planning to open on the street, the well-suited building stock of medium-sized, Cream-City brick buildings, the availability of historic preservation tax credits and a real estate market that is consistently creating new developments in Walker’s Point.  We’ll get a better sense when the street rebuilding project is finished in October. 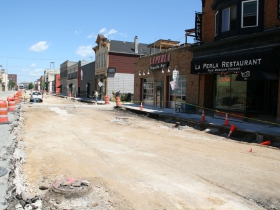 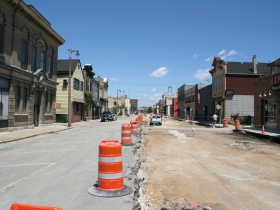 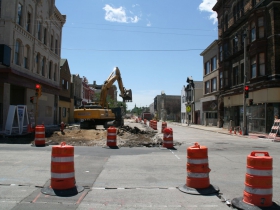 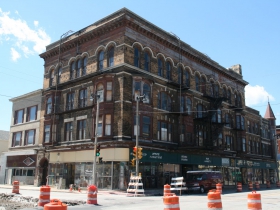 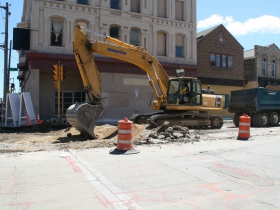 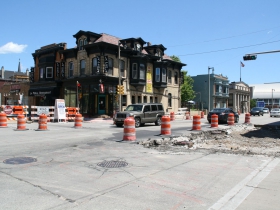