Its best-known beer, Braumeister, lasted into the 1990s. 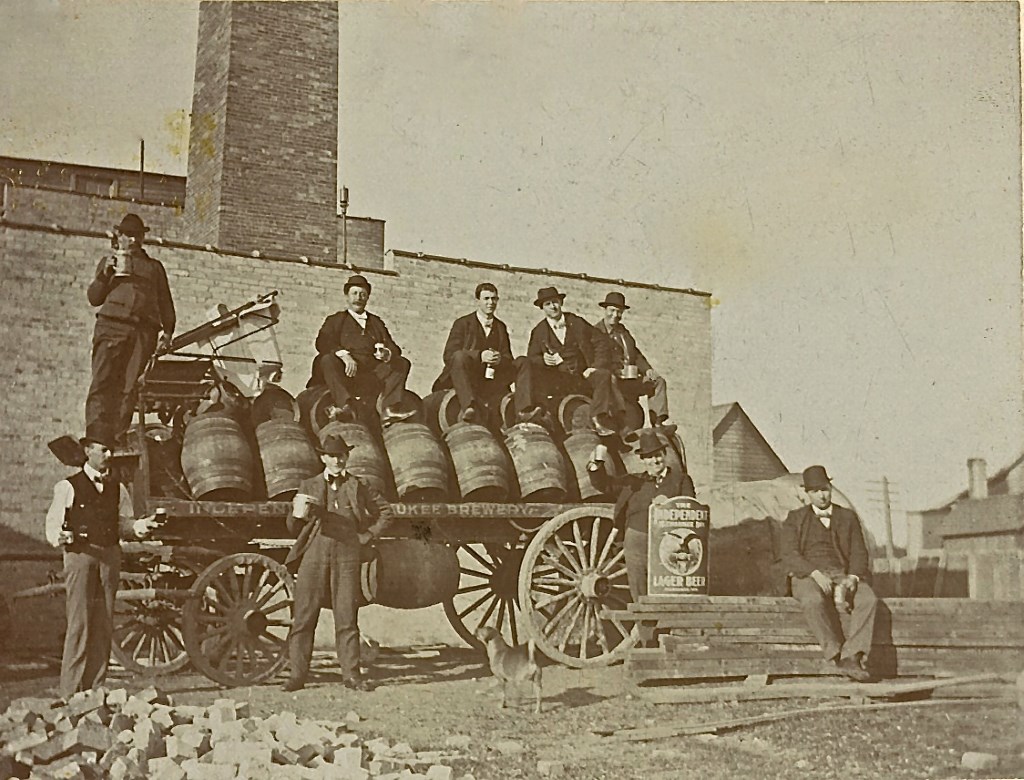 The name Independent Milwaukee Brewery was perhaps not the most imaginative for a brewer. And by local standards the company was a relative newcomer, having been founded in 1901, more than half a century after Milwaukee’s earliest breweries began.

This cabinet photograph must date from the brewery’s earliest years, and shows a group of men with a loaded beer delivery wagon and a metal advertising sign of the brewery. These signs would normally be mounted outside of taverns serving the various products. Perhaps these gentlemen are officers of the company.

It was founded by five partners: Henry N. Bills, William Gutknecht, Charles Evers, Emil Czarnecki, and William Jung. Each put up $1000. Czarnecki was named the first president of the company. During prohibition, Bills bought out his partners and brought his sons, Henry H. Bills and Harry Bills, and son-in-law, Fred Elsner into the business. During prohibition, the company manufactured “near beer,” soda water (including “Bills Root Beer”) and malt syrup.

After prohibition ended, then-president Henry N. Bills was the first Wisconsin brewer to pay for the $1,000 permit to manufacture beer after Prohibition ended. The company sold four different beers with “Bill’s” on the label, including Bill’s Culmbacher Beer and Bill’s High Power Bock Beer.

The Independent Milwaukee Brewery was located on the South Side near the corner of 13th St. and Cleveland Ave., likely the site of this photograph. The best-known brand of the brewery was Braumeister, and that included five different versions of Braumeister. The company’s letterhead promoted Braumeister. But the company also made at least 12 other brews, including Deutscher Club Lager Beer and Log Cabin Beer.

Elsner joined the Independent Milwaukee Brewery in 1928 as a salesman. He was named company president in 1956, serving in that capacity until 1962, when the company was sold to larger rival G. Heileman of La Crosse. Heileman shuttered the Independent Milwaukee Brewery and would continue selling the Braumeister label, later selling it to the Peter Hand Brewing Co. of Chicago, which continued making and selling Braumeister until 1998.