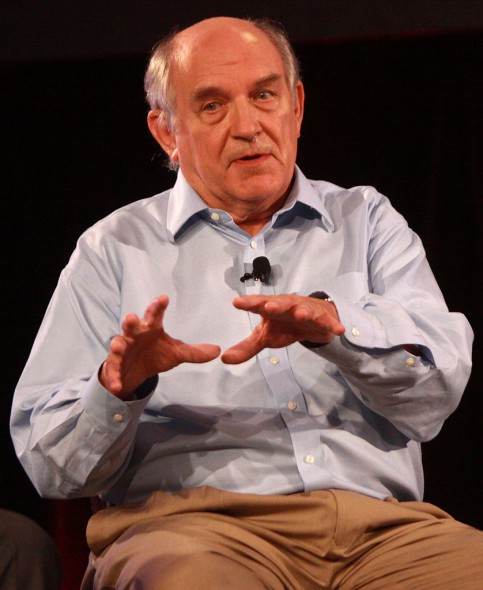 The recent news that Michael Grebe would not attend the Republican convention added yet another member of the party establishment who couldn’t stomach the idea of nominating Donald Trump as GOP candidate for president. Grebe is the outgoing president of the conservative Bradley Foundation, served as campaign chairman to Gov. Scott Walker‘s gubernatorial races and his unsuccessful presidential bid and has served in key roles in the national Republican Party.

Grebe’s decision came just before Trump was for the fifth time criticized for tweeting information or images from a white supremacist website. Republican House Speaker Paul Ryan is among many party leaders who have criticized Trump for making racially-tinged criticisms of a Mexican-American judge.

But even as Grebe separated himself from Trump, he gave a huge embrace to conservative scholar Charles Murray, who was widely condemned for publishing a “racist” book, The Bell Curve. The foundation recently awarded Murray one of its annual, $250,000 Bradley Prizes, with Grebe showering Murray with praise. Yet for many years Grebe had done his best to distance the foundation from Murray.

Murray’s career was made by Grebe’s predecessor as Bradley Foundation leader, Michael Joyce. Murray was an unknown academic who started getting financial support from Joyce, then head of the Olin Foundation, in the early 1980s, and that support continued after he took over Milwaukee’s Bradley Foundation in 1986. This helped Murray create his book, Losing Ground, which blamed government programs for creating a culture of dependance among the poor.

Joyce praised Murray as “one of the foremost social thinkers in the country,” and Murray’s 1994 book, The Bell Curve, received about $700,000 in Bradley funding (or $100,000 per year) while writing it. The book used IQ test data to argue that whites were more likely than blacks to be part of a cognitive elite and that genetic differences helped explain differences in intelligence.

The book was hack work of a particularly offensive kind, writer Eric Alterman has argued. He quotes Michael Nunley, a professor of anthropology at the University of Oklahoma, who called the book “a fraud” that presents “a deliberate, self-conscious misrepresentation of the evidence.” The book, had it been submitted for peer review, “would not be accepted by an academic journal. It’s that bad,” said Richard Nisbett, a professor of psychology at the University of Michigan. “But the footnotes in The Bell Curve raised even more troubling questions,” Alterman adds. “At least 17 researchers cited in the book’s bibliography, it turned out, were contributors to the racist journal Mankind Quarterly. Thirteen ‘scholars’ cited had received grants from the Pioneer Fund, established and run by Nazi sympathizers, eugenicists, and white supremacists.”

Joyce was accused of racism and the Bradley Foundation was embroiled in a national controversy. Joyce’s defense was that he simply funded Murray without tracking his research or where it was going. That, of course, contradicted the entire Joyce approach, which hand-picked soldier scholars to fight his “war of ideas,” as he once called it. In fact, in the forward to The Bell Curve, Murray credited Joyce as among a small group of people who read and critiqued Murray’s manuscript. By contrast, the Manhattan Institute had dropped Murray as a grantee when he was midway through the process of writing the book because it was uncomfortable with what Murray called “the genetic inferiority stuff.” And so Murray moved to the American Enterprise Institute and the Bradley Foundation’s funding moved along with him.

The controversy over The Bell Curve colored the rest of Joyce’s life and continued to shadow the reputation of the Bradley Foundation. “It was an indelible imprint on us,” he once told me.

After Grebe took over as president and CEO of the foundation, he conceded to me that the foundation had been embarrassed by its association with The Bell Curve. Clearly, the foundation wanted no more such embarrassments, and Grebe was the right man for the job. Joyce loved to bash the “liberal establishment” and court controversy in the media. Grebe by contrast, was almost invisible, operating as a kind of stealth warrior who promoted most of the same conservative thinkers and organizations Joyce had, but volunteered little about what his foundation was doing and handled media questions with a style that deftly downplayed and defused any possible issue.

The recent award to Murray makes it clear that Grebe’s difference with Joyce is not about substance, but simply about style. Grebe, if anything, is even more effusive than Joyce once was in praising Murray. His announcement of the prize lauded Murray as “an intellectual giant,” whose  “groundbreaking research has sparked debate and launched reform in a number of fields” and “a preeminent social scientist who has made monumental contributions to his chosen field.”

Yet the announcement makes no mention of The Bell Curve.

For decades, Republicans have used racially-tinged arguments, like the Willie Horton ads that helped elect George H.W. Bush, to win office. That approach has finally culminated in Donald Trump, who has made naked those coded comments with his blatantly racist comments.

Similarly, Murray gave the game away with The Bell Curve and Joyce made the mistake of defending the book. Yet the soldier scholar’s service to the conservative cause is nonetheless greatly appreciated by Grebe and the right-wing establishment. And so Charles Murray is now being showered with money and praise to help restore his reputation, while all that “genetic inferiority stuff” is discretely swept into the dustbin of history.