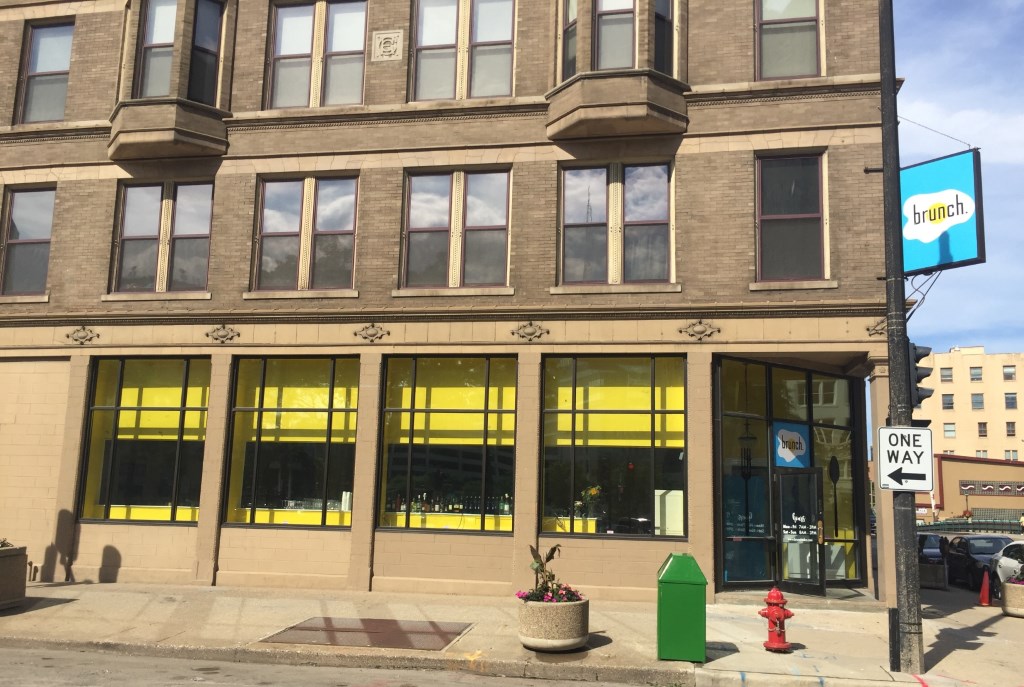 Downtown Milwaukee welcomed a new restaurant on Saturday. The restaurant, Brunch, opened at 800 N. Plankinton Ave. on the first floor of the Cawker Building. The space is bright and modern, and serves up exactly what you would expect: brunch. It will be open Monday through Friday from 7 a.m. to 3 p.m. and Saturday and Sunday from 8 a.m. to 3 p.m. Lori Fredrich of OnMilwaukee adds more details:

As owner Morgan Sampson notes, “We’re completely surrounded by condos and corporate buildings and people who have nowhere to go if they want to get breakfast at 8 in the morning.” Sampson, who notes that she’s always dreamed of opening a bakery or restaurant, says she’s had her eyes on the space for a while…

The menu – which offers a variety of creative takes on classics like benedicts, biscuits and gravy, omelets, pancakes and crepes – also includes lunch options, such as a brunch burger with a half-pound prime beef patty, caramelized onions, bacon, a fried egg and truffle cheese ($14), along with a grilled romaine and beef salad ($12) and a chicken and waffle sandwich ($12).

In the next few weeks, the restaurant will also provide sidewalk patio seating for about 24 people at 10 tables…

On Thursday, June 30, the Kimpton Hotel’s restaurant Tre Rivali and the rooftop bar-restaurant The Outsider, will open. Tre Rivali (whose entrance is at 200 N. Broadway) has a notable executive chef,  Heather Terhune, a former contestant on “Top Chef” who ran the kitchen at Chicago’s Sable Kitchen & Bar. Diners got a sample of its contemporary, Mediterranean-influenced menu when the chef did a special preview meal, taking over Amalinda restaurant for one night. Urban Milwaukee writer Rose Balistreri was there and loved the food.

The new restaurant’s interior has a European theme “with a Spanish porcelain tile floor and Carrara marble,” Ann Christenson of Milwaukee Magazine reports. “The main dining room includes a wood-fired oven (for the pizzas, among other things) and a large communal dining table.”

For years, Ardent restaurant has operated an after-hours ramen shop popular with workers from other restaurants and bars. Now Ardent will give Red Light Raman, as its come to be known, its own space next door, at 1749 N. Farwell Ave. Carol Deptolla of the Milwaukee Journal Sentinel reports:

It was time to give Red Light Ramen its own house,” Ardent chef-owner Justin Carlisle said. The ramen joint draws lines down the block, and typically serves 100 to 120 bowls of ramen a night in the 90 minutes it’s open.

Carlisle recently launched a Red Light Ramen food truck; it has a larger menu than at the after-hours venue, which serves only one style of ramen, tonkotsu.

Red Light Ramen, which Carlisle hopes to open in mid-July, would have a larger menu than it has now, more in line with the food truck. It would have a couple of smaller plates and several styles of ramen: the pork-based tonkotsu, mushroom miso ramen, and chilled trout ramen, in chilled fish shio broth.

The new Red Light Ramen would be open more than the current Friday and Saturday nights, likely three or four days a week, Carlisle said… The walls will be painted in graffiti, and the windows are covered in a wrap that keeps the space dark.

Starting on Monday, June 27, Meraki in Walker’s Point will debut a new lunch menu. The menu will be served from 11 a.m. to 1 p.m. Monday through Friday, and is available for dine-in, takeout or delivery (Flavor Cycle). Meraki is also featuring all-day happy hour with $1 off beer, rail cocktails, wine by the glass from 11 a.m. to 6 p.m. Deptolla adds more:

Menu items will change periodically but will always include a soup, salad, a cold and a hot sandwich on house bread, and a noodle bowl that the restaurant is calling “ramen(ish).” The restaurant’s bar bites also will be available at lunch, currently including fried brussels sprouts ($4), potato pancake ($3), mushroom pate ($3) and beef tongue tamale ($4).

The debut lunch menu will have a bento box ($10) of vegetables or chicken with rice and seasonal pickled or cured vegetables, beef dip ($8) as the hot sandwich and a “plt” ($7) — pipikaula, Hawaiian-style brined and smoked beef, with lettuce and tomato — as the cold sandwich. The noodle bowl will be rabbit and pork, and the one-pot dish will be lobster mac and cheese ($9).

Last year, the Steaming Cup coffeehouse in Waukesha was taken over by Chef Jason Tofte and his wife, Cristina Tofte. Now, the couple will be opening a second restaurant. Located at 331 Riverfront Plaza in Waukesha, Tofte’s Table will serve shareable plates and focus on the couple’s fine-dining roots. A relaxed atmosphere will set the mood Tuesday through Saturday, and the restaurant will be closed on Sunday and Monday. Deptolla  reports:

The menu will offer up to 20 items, and about half would change weekly or so, as seasonal ingredients change. The size of dishes would vary, making it easier for guests to order entrees if they don’t want to share, Tofte said.

The new restaurant will be a “chef’s playground,” Tofte said in announcing the restaurant, but he plans to give it broad appeal with some meat-and-potatoes dishes and a Friday night fish fry of cracker-crusted perch fillets.

The restaurant will have a full bar, where the focus will be on wine from around the world; beer and spirits will emphasize Wisconsin-made products.

Since Marcus Corp. bought the unique bar at 779 N. Front St. in Milwaukee last year, major renovations have been implemented to improve customer experience. Besides adding new hardwood floors and substituting paper napkins with cloth, the food and drink options have been updated, as well. Marcus is also renovating the Newsroom Pub, which holds monthly board meetings and luncheons for the Milwaukee Press Club. The Journal Sentine’s Larissa Garza adds more:

In addition to the facelift of the building, SafeHouse also has updated its food and drink menus. On the new menu, every item is made with fresh ingredients, from the “Licensed to Kill” macaroni and cheese to the freshly packed burgers. Menu options range from nachos or a half-rack of ribs to a variety of sandwiches and salads.

Marcus acquired the SafeHouse and the Newsroom Pub from their founders, Dave and Shauna Singh Baldwin. Dave Baldwin passed away shortly after selling the business…

Rustico, located at 223 N. Water St. in Milwaukee, will close on Saturday, July 2. Its owner, Brian Zarletti, has confirmed the closing and hopes to focus his time on two other Zarletti concepts. Zarletti described his restaurant’s nine-year life as “no small feat” and says it has been a great nine years. Fredrich adds this:

If a highlight of your summer is enjoying pizza, pasta or weekend brunch on the Rustico patio in the Third Ward, now is the time to get your final fix.

The space won’t be vacant for long. Joshua Janis, owner of Refuge Cafes, will be opening Rivalry, a dual-level sports-themed bar described as “comfortable and trendy with the best food and drink from both Illinois and Wisconsin.”

According to Janis, the upstairs (street level) will feature a Wisconsin theme, along with state-themed sports coverage. Meanwhile the downstairs (riverfront level) will carry an Illinois theme, featuring games for Chicago/Illinois teams.