It’s coming to the Kimpton Hotel, and the food by chef Heather Terhune is special. 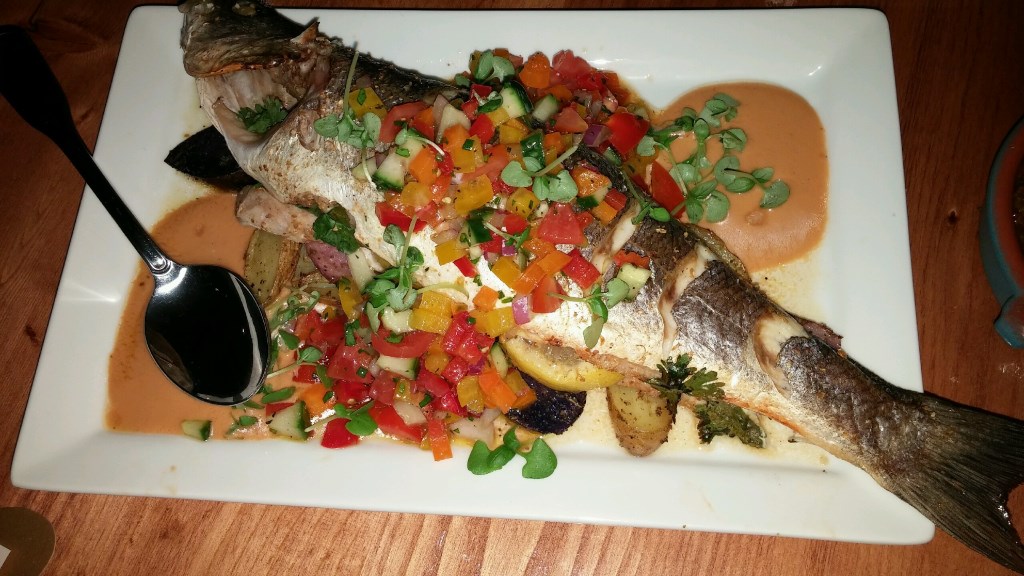 Tre Rivali, the new Mediterranean restaurant opening in the Kimpton Hotel in the Third Ward, hosted a preview dinner at Amilinda last night. Tons of media were invited to partake, including those from Key Milwaukee, Milwaukee Magazine, OnMilwaukee.com, M Magazine, Shepherd Express, Madison Magazine and WISN-TV Anchor Melinda Davenport and CBS 58 Anchor Jessica Tighe, along with yours truly from Urban Milwaukee.

And what a treat!

We were first served a “signature” cocktail of the restaurant, a wonderful amber concoction of Pro Secco, Pimm’s cup gin and some delicate herbal flavors, including basil. It was very refreshing.

Then there was the parade of appetizers. Tuna tartare micro cones — a fresh raw tuna carpaccio with a hint of finely chopped olives and capers served in a delicate cracker cone topped with a beautiful lemon aioli. A passed hors d’oeuvres of bacon-wrapped dates filled also with chorizo and Manchego cheese was also lovely. Another was eggplant caponata crostini, a riff on the traditional agrodolce (sweet sour) Sicilian chutney, finely blended to stay on the crostini topped with a decorous dollop of creamy goat cheese finished with micro-greens. 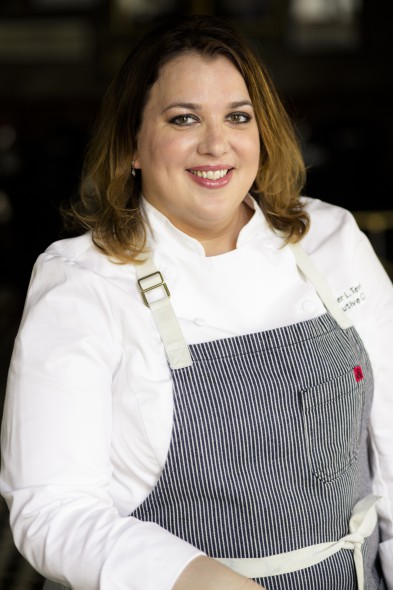 After these appetizers while we were standing and socializing, we sat down for the formal meal, though the food was served family style, which worked perfectly for the amount of dishes and diners. Each course was introduced by the Executive Chef Heather Terhune, best known as a competitor on Top Chef! She served as the executive chef of BDK Restaurant & Bar in San Francisco after working in Chicago for more than 18 years. In 1999, she opened the acclaimed Atwood Restaurant in Chicago, and left nearly a decade later to open the award-winning gastro-lounge, Sable Kitchen & Bar, before moving on to BDK in the Bay Area . She was generous in her praise of all the other chefs involved in the meal prepared for us and said she usually had olive oil, salt and lemon zest in her pocket. She loves food with a punch of strong flavors and a bit of acid.

We started off with a scallop crudo — raw fresh scallops finely sliced carpaccio style dressed with a light vinaigrette of pink grapefruit wedges, Calabrian chilies and mint. It was delicious, light and fresh.

Next came olive oil-braised and charred octopus with salsa verde and preserved lemons which had a Spanish flare served in a cazuela (cooking pot). The octopus was meaty and tender with a lovely smoky grilled flavor. The salsa was very intensely verde, almost like a pesto, but with different herbs. Then came a salad of shaved celery and escarole garnished with white anchovies — not the salted kind but marinated in vinegar, making it pungent and tasty — plus marcona almonds and more lemon.

Which were a very airy chocolate torte with rum saboyan sauce and shaved chocolate and a butterscotch budino (kind of a pudding) with a buttery rosemary shortbread cookie. Both very tasty.

All this was accompanied by lovely Spanish wines.

The atmosphere was relaxed and intimate. I look forward to Chef Terhune’s restaurant opening this summer in the new hotel — which will include a rooftop garden for fine weather dining. Kimpton claims to have created  70 unique restaurants, bars and lounges in the 65 hotels it owns. I can’t speak to that, but based on this sampling its Milwaukee hotel could have a very good restaurant.