Usually ground-breaking ceremonies are causes to break out gold shovels, but Ogden Multifamily Partners opted to utilize gold sledgehammers. The firm’s 22-unit apartment building is being developed on the site of a one-story building originally built in 1948. The sledgehammers were put to use Thursday morning as the project team and local alderman Nik Kovac took a few ceremonial swings at the nondescript building.

The building, to be known as the Keystone Apartments, is being constructed at what Ogden principal Jason Pietsch called one of the most visible locations on one of the city’s classic streets, at the northwest corner of E. Brady St. and N. Humboldt Ave. A great location on E. Brady St. comes with strings attached though, as the development required both a zoning change and Historic Preservation Commission approval. That process, which required a number of public meetings, didn’t seem to leave the development team any worse for wear. Ogden Construction president Joel Cook was quick to praise the local alderman, saying “Kovac was very instrumental in making the project go.” And Pietsch praised the Department of City Development, stating “they have been unbelievably great to work with.” Pietsch noted that at every step along the way, be it meetings with the Brady Street Association and neighbors, or working with the city, the firm received “support and constructive criticism.”

All told, Ogden spent most of the fast-paced ground breaking dishing out praise to city government. Making that all the more unusual was that the project is being built entirely with private financing.

After thanking the crowd in attendance, Ogden principals Pietsch, Peter Ogden and Jon Ross, as well as a handful of other dignitaries, donned safety glasses and hard hats and used their gold-colored sledgehammers to take a few swings at a building no one will miss. They were warned to swing gently, as Cook noted the firm has yet to pull a demolition permit, but that didn’t stop one hammer-yielding attendee from shattering a glass door. While Ogden probably won’t complain if you happen to end up on the site and start swinging away (though the police might), real demolition work won’t begin for a couple of days.

Design of the building is being led by Tim Wolosz of Engberg Anderson, who was present at the groundbreaking to swing a sledgehammer along with firm partner Mark Ernst. Ogden Construction will serve as their own general contractor, with North Shore Bank providing financing.

The L-shaped, four-story building will have a 3,300 square-feet commercial space that fronts E. Brady St. Ogden hopes to lease the space to a restaurant. As part of the design changes requested by various bodies along the way, the fourth floor will only contain a club room and fitness center.

The apartments will be a mix of studio, one- and two-bedroom units built on a .26 acre site.

Twenty-three vehicle parking stalls and a bike parking room will be included in the building, with most being located underground. Tenants will access the garage and building lobby from N. Humboldt Ave.

Final approval for the project was granted in early November 2015. Ogden purchased the site at 1701 N. Humboldt Ave. for $565,000 in December 2015 according to state records.

The 2,720 square-feet building on the site was most recently home to the Zoom Room, a pet fitness center that didn’t last more than a couple of years. Prior to that it was the longtime home of a laundromat.

During a post-sledgehammering interview, Kovac praised the outcome of the design process, saying he “appreciates (the developer’s) flexibility” and there was “a good community process.” Warming to the topic, Kovac said “I think this is a great building, and it came out of many different and often conflicting opinions about what should be here. But at the end of the day I think it’s well designed. It will be a new icon on an iconic street.”

Regarding the zoning change, Kovac noted that the building was within the height maximum of 60 feet for the street, but needed a zoning variance for additional density. The alderman said the density request wasn’t out of character for the street, matching the floor-area ratio of the three-story building at 1234 E. Brady St. That building is most readily identified as the long-time home of a hardware store and now houses eight apartments and a newly-opened Harry’s Bar and Grill. 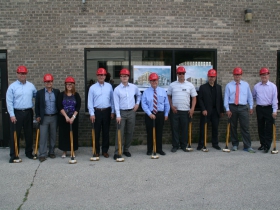 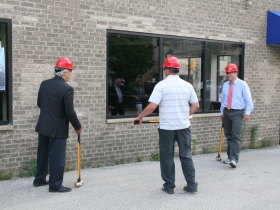 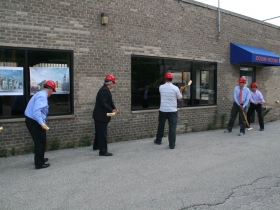 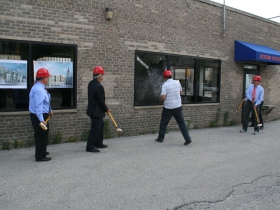 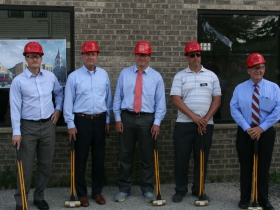 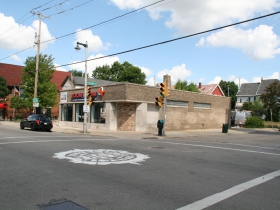 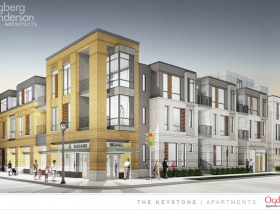 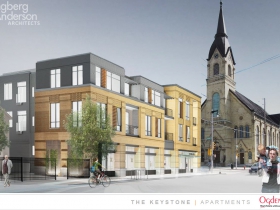 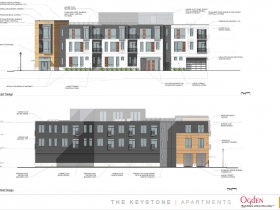 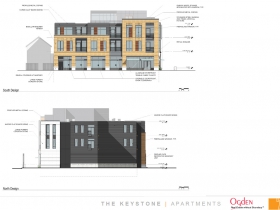 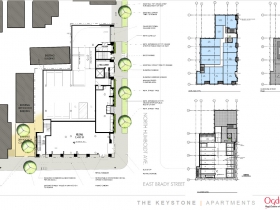