Tax Cut A Windfall for Millionaires

By Tamarine Cornelius, Wisconsin Budget Project - Jun 28th, 2016 02:03 pm
Get a daily rundown of the top stories on Urban Milwaukee

A new tax break that has cost much more than originally anticipated has resulted in enormous tax breaks for the very wealthiest, according to a new report from the Wisconsin Budget Project.

The Manufacturing and Agriculture Credit nearly wipes out state income tax liability for manufacturers and agricultural producers in Wisconsin, with most of the money winding up in the pockets of millionaires. Tax filers with incomes of $1 million and more – a group that makes up just 0.2% of all filers – claim a remarkable 78% of the credit amount that is paid through the individual income tax. Filers in that income group receive an average estimated tax break of nearly $28,000. That stands in sharp contrast to the average tax cut for filers with incomes of under $250,000: just $4. 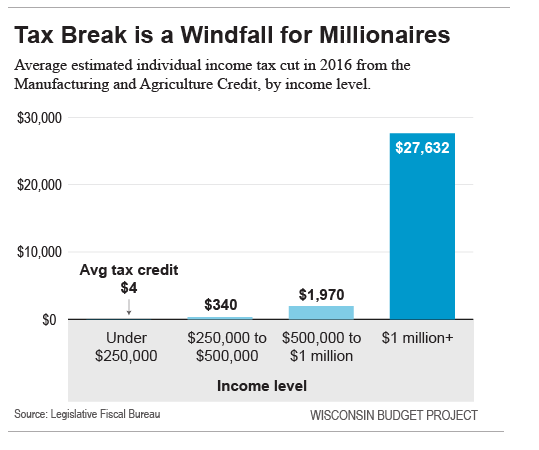 Tax Break is a Windfall for Millionaires

Other than millionaires, few people in Wisconsin get any value from this tax break. Among filers with incomes of $1 million and more, 1 out of every 4 tax filers receives the credit. But for filers with incomes of under $250,000 – a group that makes up 98% of Wisconsin tax filers – only 1 out of every 450 filers receives the credit.

There are other problems with the Manufacturing and Agriculture Credit. In addition to being extraordinarily slanted in favor of the highest earners, the credit now looks like it will cost more than twice the original estimate, ballooning to $284 million in fiscal year 2017. The unexpectedly high cost means that manufacturers have gotten a much bigger tax break than lawmakers originally thought, and the reduction to state tax revenue is much larger as well.

There is no requirement that manufacturers create jobs in order to be eligible to receive this credit. In fact, manufacturers that lay off workers, move jobs overseas, and close facilities are still eligible for the credit as long as they maintain some manufacturing in Wisconsin.

The Manufacturing and Agriculture credit is the latest example of a counter-productive tax-cutting agenda in Wisconsin. The focus on cutting taxes has done little to boost job creation, but has reduced the resources needed to make the kind of public investments that make Wisconsin a great place to live, work, and do business.  Wisconsin’s cuts in state support to public schools are among the largest in the country, endangering the strong public education system that gives Wisconsin students one of the best educations in the country. Wisconsin has also made deep cuts to the University of Wisconsin System, making it harder for universities to add classes in high-demand fields, and for students to graduate on time. Instead of investing in our schools and higher education system, Wisconsin has prioritized tax cuts like the Manufacturing and Agriculture credit, which gives significant tax breaks to millionaires without requiring that even a single new job be created.

3 thoughts on “Wisconsin Budget: Tax Cut A Windfall for Millionaires”