The data shows how he stole Republican Party despite opposition of its leaders.

Donald Trump’s hostile takeover of the Republican Party has caused considerable consternation among the conservative intelligentsia and Republican elected officials. Like many observers I was surprised by Trump’s success. Partly I was fooled by polls—including the Marquette Law School polls of Wisconsin voters–that showed Trump’s support as topping out in the thirty-somethings and his high negatives. 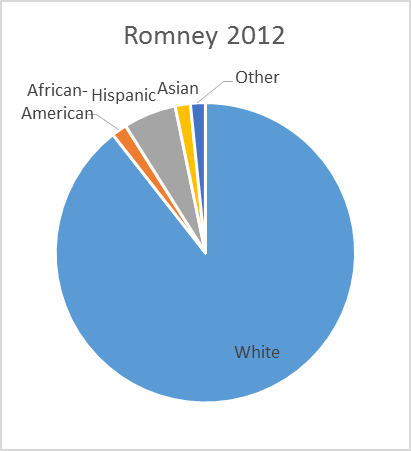 In retrospect, the elements that converged to make him the nominee were always there. Start with the ethnic makeup of the modern Republican Party. Here is the vote for Governor Romney in 2012. As can be seen the Republican Party has become largely a white people’s party, at a time when other groups are growing faster.

Compare the monochromatic Romney party to the 2012 Obama coalition. Although still majority white, it has large numbers from other groups.

It appears that the recent success of the Republican Party in elections is due to its ability to attract working class white Democrats who are deeply pessimistic about the future of the nation and their role in it. A sign of their malaise is the recent research discovering increasing self-destructive behavior among whites without college degrees.

Many are prone to blame immigrants, minorities, and imports for their problems. Trump realized he could tap into those resentments. 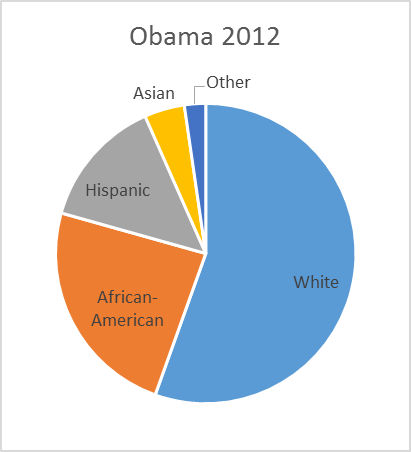 This orthodox party line included several elements. One was low taxes, particularly on the wealthy. Usually this was justified as a way to create jobs and assure prosperity. At other times, it was described as a blow for freedom, the reason why Libertarians generally support Republican candidates. All the tax plans advanced by the candidates for the Republican presidential candidates had tax reductions heavily skewed to favor the wealthy. To avoid huge deficits, they would imply heavy cutting of government programs, although this was usually not spelled out.

A second element was getting rid of all limits on campaign spending. In Wisconsin, this went well beyond the series of decisions by the US Supreme Court. It succeeded in eliminating one of the few restrictions that the conservative justices had left standing—the restrictions on coordination between candidates and outside groups.

A third element was cutting government benefits, such as raising the age of Social Security and replacing Medicare with a system of block grants to the states or one in which recipients could buy insurance on the private market with the aid of government subsidies.

A fourth element was to deregulate Wall Street, notably by repealing the Dodd-Frank legislation.

There were signs that many Republican voters did not embrace parts of this agenda. For example, the Bloomberg Poll found that the Citizens United decision, allowing corporations to contribute to campaign ads, was as unpopular among Republicans as among Democrats:

Although the ruling was fashioned by the court’s conservative majority, Republicans oppose Citizens United 80 percent to 18 percent, according to the poll. Democrats oppose 83 percent to 13 percent, and independents, 71 percent to 22 percent. Among self-described liberals, conservatives, and moderates, 80 percent say the decision should be overturned. 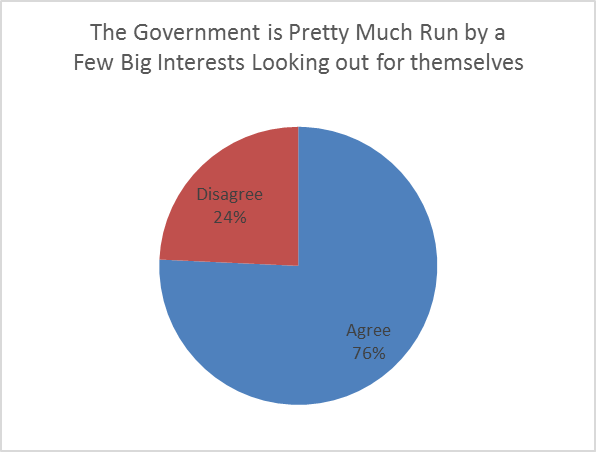 Here is another example, from the Marquette poll from November of last year, of the influence of big money in politics. Over three fourths of Republican voters in Wisconsin agreed that the government is run by a few big interests looking out for themselves.

Almost 70 percent of Republicans also agreed that the government ignores the interests of hard-working Americans.

Part of the explanation for Trump’s success is his ability to recognize and exploit the gap between the orthodox conservative agenda and what Republican voters want. This points up the dangers of depending on resentments to attract voters.

Conservatives opposing Trump fall into two camps. One group opposes him because of his many personal failings—his demagoguery, his lying, his tendency to belittle people particularly for their appearance, and his admiration for dictators. 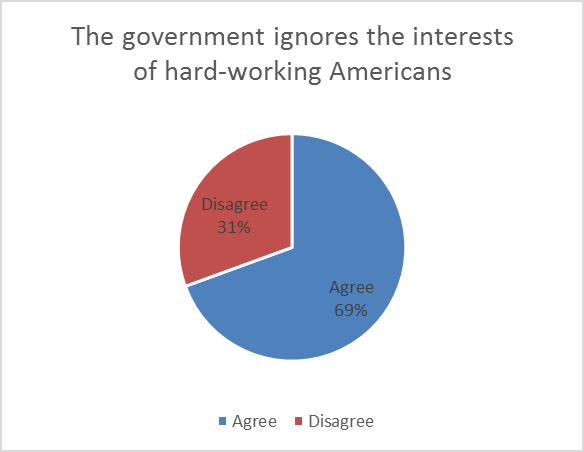 The Government Ignores the Interests of hard-working Americans.

Others oppose him because of his various heresies that violated conservative orthodoxy. The Club for Growth spent several million dollars running ads that accused Trump of not being a true conservative. These were notably unsuccessful.

To get an idea of the moral compass of the latter group, consider the effort to find a true conservative candidate who could run for president and serve as an alternative to voting for Trump or Hillary Clinton. Bill Kristol, the editor of the conservative Weekly Standard, announced he had found a possible candidate. Kristol was, among other things, known for first identifying Alaska governor Sarah Palin as a vice presidential candidate.

In this case, Kristol’s candidate turned out to be David French, a writer for the Online National Review. French has already appeared in two Data Wonk columns.

French’s first appearance was because of his claims on the conduct of the search of Cindy Archer’s house as part of the first John Doe investigation, of crimes related to the Scott Walker county executive office. He claimed that:

The officer or agent in charge demanded that Cindy sit on the couch, but she wanted to get up and get a cup of coffee. ‘I told him this was my house and I could do what I wanted.’ Wrong thing to say. ‘This made the agent in charge furious. He towered over me with his finger in my face and yelled like a drill sergeant that I either do it his way or he would handcuff me.’ They wouldn’t let her speak to a lawyer.

These claims were disproved by an audio tape of the search. Nevertheless, this account and various similar claims about searches that took place during the second John Doe investigation, of coordination between the Walker gubernatorial campaign and ostensibly independent groups, were—and are—widely accepted on the right. In fact, French’s take on the Archer search even made it into Wisconsin Supreme Court Justice Annette Ziegler’s concurrence in halting the investigation.

Why would French, and many others on the right, accept such unsupported assertions as fact, when there were many reasons to doubt them? The investigator’s claimed behavior, after all, was likely to be counter-productive, to cause the witness to clam up. The searches involved a number of agencies; even if one had a culture of abuse, they would be less likely to show it with witnesses from other law-enforcement agencies. The similarities between the accounts of the various searches suggest a common author (I suspect Eric O’Keefe and David Rivkin, his attorney).

The result is to help create a culture where truth does not matter, where any accusation against one’s opponents is fair game. Thus, in Trump’s case, Obama was born in Kenya, Cruz’s father helped assassinate President Kennedy, and there will be no end to the crimes committed by Hillary Clinton. David French, far more respectable than Trump, helped create a culture that welcomed Trump, in which truth takes a backseat to the political point.

The second time he appeared in this column was when he showed his disdain for the white working class for supporting Trump. He endorses an article by his National Review colleague Kevin Williamson on the white working class: “nobody did this to them. They failed themselves.” French seconds his colleague’s disdain: “Kevin is right. If getting a job means renting a U-Haul, rent the U-Haul. You have nothing to lose but your government check.” Williamson and French leave the reader half-expecting them to use the term “white trash” to describe the Republican base.

The problem, as the Republican establishment is discovering, is that building a political power on people’s frustrations can bring success in the short run. But the edifice is very fragile in the long run. Unless one also offers a solution for those frustrations, in the long run it opens the door to demagogues who are willing to promise only vague solutions. Both in their lack of critical analysis of “facts” and their disdain for their voters, they help prepare fertile ground for Donald Trump.