Transforming a South Side Neighborhood 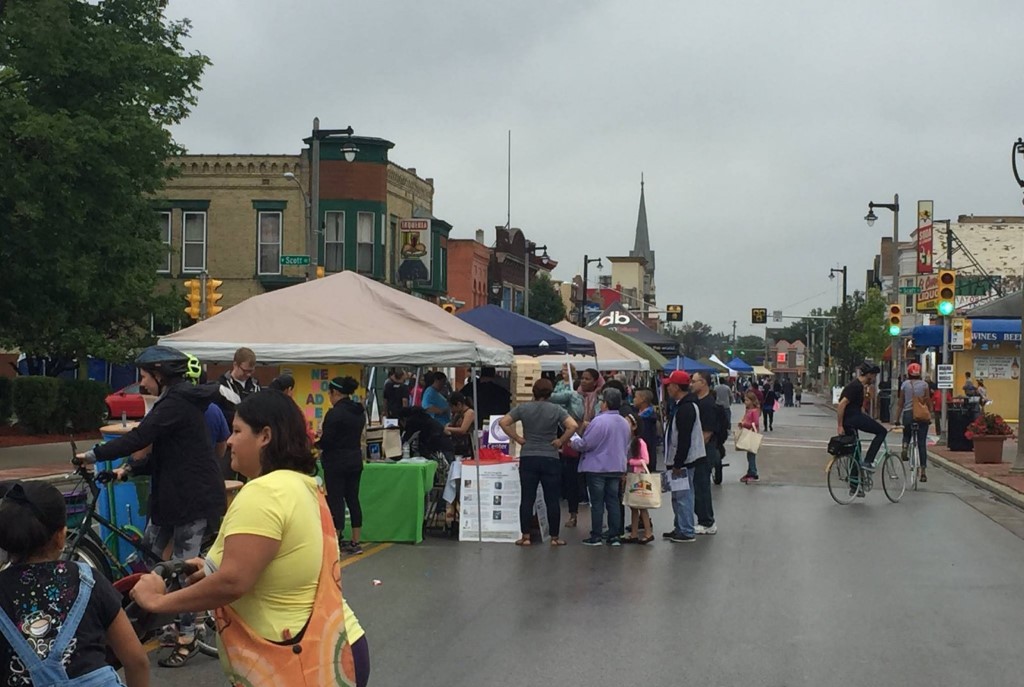 Milwaukee’s Clarke Square neighborhood was in the spotlight for one of the sessions at the National Main Street Center’s annual conference held in Milwaukee last week at the Wisconsin Center. The conference was billed as an event that “brings together a coast-to-coast network of city planners, community revitalization professionals, volunteers and elected officials working to sustain the future of America’s historic downtowns.” But the sessions ranged more widely, to include development beyond downtowns.

The role of cultural activities in community development was among the topics explored, including the session focusing on cultural efforts in Clarke Square, a 40-square-block South Side neighborhood that is one of Milwaukee’s most eclectic and economically challenged. Clarke Square is bordered by Cesar E. Chavez Drive (formerly S. 16th St.), Layton Boulevard (or S. 27th St.), W. Greenfield Avenue and Mitchell Park/Menomonee Valley, and includes Clarke Square Park. Once a bastion of Polish culture, Clarke Square is now home to a majority Latino population (the largest in Wisconsin), as well as people of Asian, African American and European descent. It is one of the most diverse neighborhoods in Milwaukee, and the state. 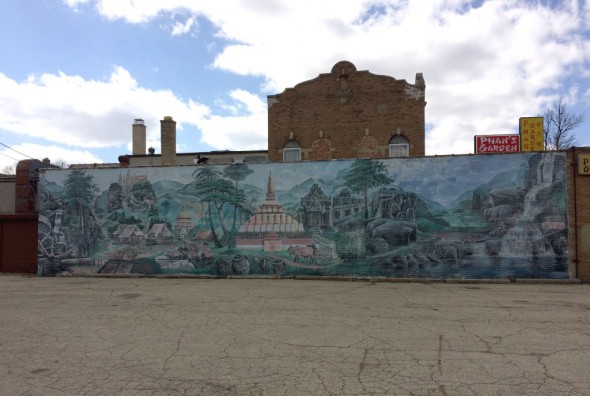 The nonprofit Clarke Square Neighborhood Initiative (CSNI) is accentuating the area’s diversity and its “emerging identity as an artistic and creative community,” according to executive director Ian Bautista. He and Juan Lopez, a project coordinator, spoke at the conference about efforts to connect cultural assets from all parts of the neighborhood. Bautista and Lopez said the area’s ethnic diversity adds to its dynamism and appeal and is showcased through events and other programming. “We take the long view,” explained Bautista, who said they want to ensure that everyone feels welcome, whether they live, work, attend school, visit or worship in the area. One strategy for their initiative is to keep inviting all members of the community to participate in the development process and varied activities. CSNI also partners with nearby neighborhoods, including Walker’s Point and Walker’s Square.

One major goal is to make Cesar E. Chavez Drive, the neighborhood’s main street, “a Milwaukee destination.” The Cesar Chavez Business Improvement District is collaborating with CSNI on the three-year-long “Farm Project,” which honors farm-worker-organizer Chavez’s legacy and focuses on “seeding arts, culture and small business” along the commercial corridor. Bautista said that the family-owned Nuevo Mercado El Rey has become the business district’s hub of social and cultural activity. The Hispanic supermarket replaced a smaller store that had been a family-owned mainstay since 1978. Efforts are also under way to improve Cesar Chavez streetscapes and encourage businesses to spruce up their facades. The Farm Project commissioned a life-size sculpture of Chavez, which was installed in El Rey’s plaza in March.

Another Farm Project initiative is Ciclovia MKE, which will host two Sunday celebrations this summer. CSNI and the BID are cohosting the events with the Wisconsin Bike Federation, the city, county and several different neighborhood groups and non-profits. Ciclovia events will be on June 12 based in Walker’s Point/Walker Square and August 14 in Clarke Square. Each will run from noon to 4 p.m. Cesar Chavez Drive and other streets will be closed to automobiles.

Ciclovía means “cycleway” in Spanish; the concept of periodically closing streets to cars was first popularized in Colombia decades ago. It caught on in South America and for the past decade in the U.S., where it’s become part of a national “Open Streets” movement. The mini-festivals will feature live performances, food and other vendors, and activities including sidewalk chalk projects and dance.

The first Ciclovia MKE event was held last September and drew cyclists and other visitors despite cool, rainy weather. According to Ciclovia MKE’s event’s website, “Many people are afraid to drive through Milwaukee’s central city neighborhoods, let alone convene there for recreation. ‘Open Streets’ events offer a unique opportunity to bring diverse communities together and create safe, fun places for residents to ride their bikes, run, walk and socialize.” Organizers note that Open Streets events in communities around the country and world have boosted local economies. 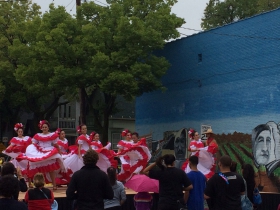 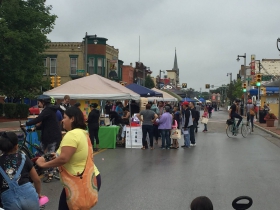 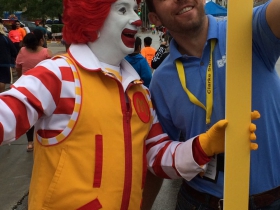 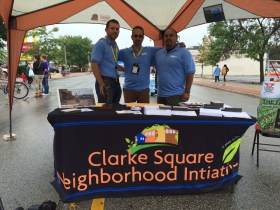 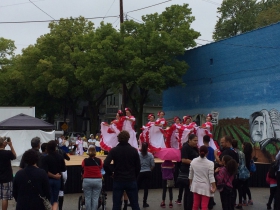 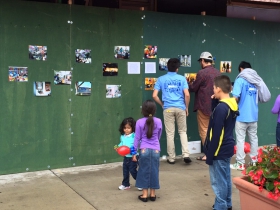 Other upcoming CSNI-hosted cultural events include a music festival on September 17, an artist-in-residence program, multicultural murals throughout the neighborhood (such as a massive mural of a Vietnamese landscape on the wall of Phan’s Garden Restaurant), and “Loteria,” a “friend-raiser” community-based art exhibition. CSNI also partners on events at Mitchell Park, including in the horticultural-conservatory Domes, and in Clarke Square Park.

These projects are all part of implementing a “Quality of Life Plan” developed by the Zilber Neighborhood Initiative in 2009 through community-wide visioning. Bautista, who joined CSNI in 2014, said emphasis on cultural activities and assets addresses goals established for health and wellness, neighborhood beautification and economic development. He called CSNI the “mini backbone” of a “local collective impact effort” to drive community and economic development.

In San Francisco’s Market Street neighborhood (with some of the city’s poorest and wealthiest residents), neighbors were asked the open-ended question: “What would you like to see on the street?” According to Kay Cheng of the San Francisco Planning Department, answers included experiencing nature in the city, access to play and joy for people of all ages, and nighttime activities that do not revolve around drinking. The responses became the basis of the Market Street Prototyping Festival, which launched in 2015 with short-term projects in public spaces. Ten new prototypes will be installed in 2016, before permanent projects are implemented in 2018. Cheng spoke about the value of experimentation and of including many voices in the conversation, not just city officials and civic leaders. She said the project’s motto has been: “Fail early, fail often and learn from it.” She said this civic-engagement approach is a new model for determining what a community wants and needs and can help avoid commissioning expensive designs that often fail despite great cost and much planning.

Robert Gipe, a community college professor, novelist and producer of the community-based Higher Ground project, described cultural initiatives in Harlan County, Kentucky. Efforts originally focused on addressing a social problem—rampant opioid abuse–not a physical space. But Gipe said that public art, collective photographic storytelling and a community-wide theatrical project have brought residents together since 2002 and positively impacted the county. The area is gradually emerging from its longtime coal-country identity. Gibe described how creative efforts and connections (supported by various grants) have spilled over into what’s happening on the area’s Main Street and are bringing more people to the community. One outgrowth has been a youth-oriented organization, fueled by social media, called “It’s Great to be Young in the Mountains,” or IG2BYITM. Gipe said these efforts are helping expand the sense of possibility for individuals and the whole county.

Sara Daleiden, a cultural production consultant with the Greater Milwaukee Committee, described several projects that have focused on reimagining West Wisconsin Avenue, including temporary installations, NEWaukee-hosted night markets and Creative Alliance Milwaukee’s The Spot4MKE project. Daleiden said these initiatives have shown the “public space is really wanted.” She hopes that development of a city-owned lot on Wisconsin between 4th and 5th streets will include a public space. She is also working with the GMC on projects relating to a citywide trail network that includes walkable city streets. GMC has also developed “The Milwaukee Method of Creative Placemaking,” which Daleiden described as focusing on investing in public spaces, repurposing industrial areas and valuing neighborhoods.

All of the above initiatives focus on remaking places. The Project for Public Spaces has been using the term placemaking since the mid-1990s relating to efforts to create or enhance “places that people love.” The nonprofit, which works throughout the world, began in 1975 based on the ideas of William “Holly” Whyte and Jane Jacobs.  Simply bringing people to a place, whether for special events or on a regular basis, affects how a neighborhood evolves socially and economically.

CSNI’s Lopez spoke to the conference about the importance of neighbors taking ownership of a cultural district. He stressed that a neighborhood initiative differs from a government one in how it can engage a community’s residents and encourage broadly inclusive participation. Lyz Crane of ArtPlace America noted that grants can be a springboard for cultural projects that gradually become sustainably supported by communities as their value is recognized.

The National Main Street Center is a subsidiary of the National Trust for Historic Preservation. The conference in Milwaukee drew about 1,430 attendees.