Early beer garden on near South Side was privately run and served Blatz. 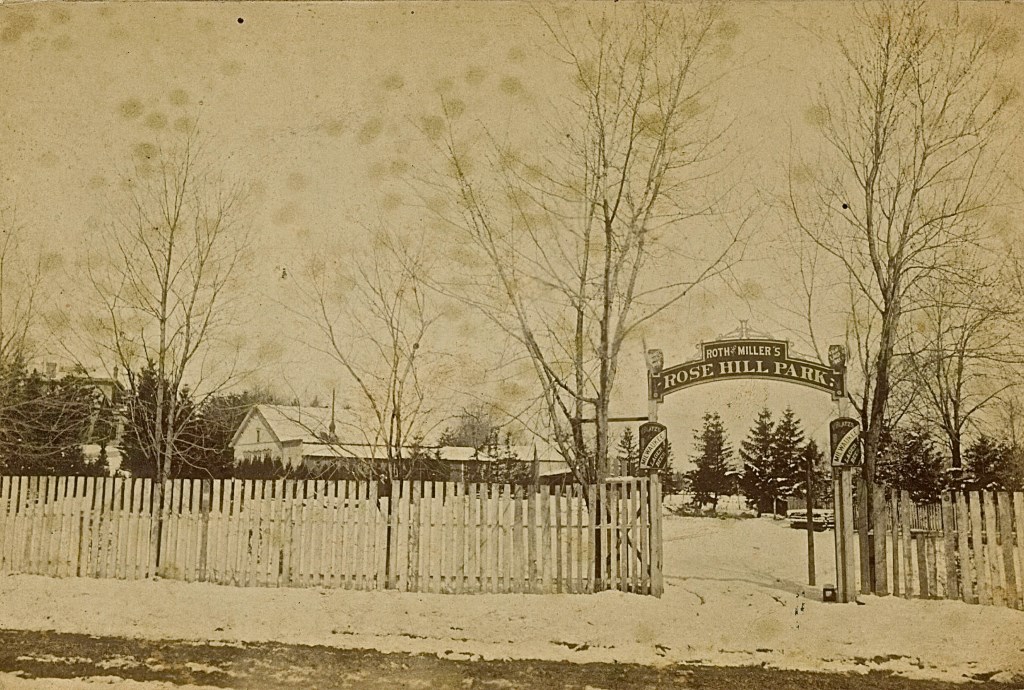 Summer beer gardens in Milwaukee County parks are a recent trend, but the outdoor beer garden is hardly a new concept. In the 19th century outdoor beer gardens were popular nationally, but Milwaukee was “the undisputed leader in the number (and extravagance) of beer gardens,” as one history recounts. “Competition between the city’s dozens of gardens was fierce, and all manner of entertainment was employed to lure a large beer-drinking crowd, Carl H. Miller writes. “Lueddemann’s Garden, for example, once featured a ‘daring and beautiful’ female performer who set fire to herself and plunged 40 feet into the river below, much to the delight of on-lookers.”

However, the most popular beer gardens were owned by Milwaukee’s breweries: “In 1879, the Schlitz brewery bought a local beer garden and turned it into a magnificent resort, appropriately renamed Schlitz Park,” Miller recounts. “The large garden was a virtual entertainment mecca, featuring a concert pavilion, a dance hall, a bowling alley, refreshment parlors, and live performers such as tightrope walkers and other circus-style entertainers. In the center of the park was a hill topped by a three-story pagoda-like structure which offered a panoramic view of the city.”

Pabst Brewery created Pabst Park, and its “eight-acre resort boasted a 15,000-foot-long roller coaster, a ‘Katzenjammer palace’ fun house, and an oddity touted as ‘the smallest real railroad in the world.’ Wild west shows were held on a regular basis, and live orchestras performed seven days a week all through summer… Frederick Miller‘s garden on the western outskirts of the city catered to a somewhat more reserved clientele. A visitor to Miller’s Garden wrote in 1873: ‘The garden, situated on a lofty eminence, overlooking a wide stretch of green and rolling country…is a very pleasing place to while away the hours of a scorching afternoon. Seated at a rustic table beneath leafy bowers, men and women, staid and middle-aged, during pauses in their friendly conversation, sipped their amber lager. In the spacious pavilion, Clauder’s band rendered sweet music.'”

Unlike today’s gardens, these were all privately run. Most tended to be away from the heart of town. There were, however, numerous smaller beer gardens, also privately run, located closer to the city’s center. This photograph (probably taken in the years 1882-1885 and probably in the winter) is a view of the Rose Hill Park, a name that has long since disappeared. The land was on the South Side, very close to the Forest Home cemetery, and had originally been the location for the Dunlap nursery, but was purchased by William Miller, who then opened the Rose Hill Park beer garden within a year. Advertising indicates that the preferred beer was Blatz. (Blatz Park, a bigger beer garden featuring this beer, was located on the Milwaukee River near North Avenue, one of several beer gardens once found on the Milwaukee River.)

While Rose Hill Park appears to be a modest place, it was actually quite large at the time, occupying over six acres and with a capacity for 15,000 people. The property included Miller’s residence, a dancing hall, a band stand and a parade ground. The park was convenient to two street railway lines, horse-drawn of course, and was bounded on two sides by what now is Forest Home Ave. and Muskego Ave.

This park would not last very long though. By the 1890s the property was subdivided and one of the new streets was even named Rose Hill Lane. Today the lane is known as S. 23rd St., a section that only extends for one block.