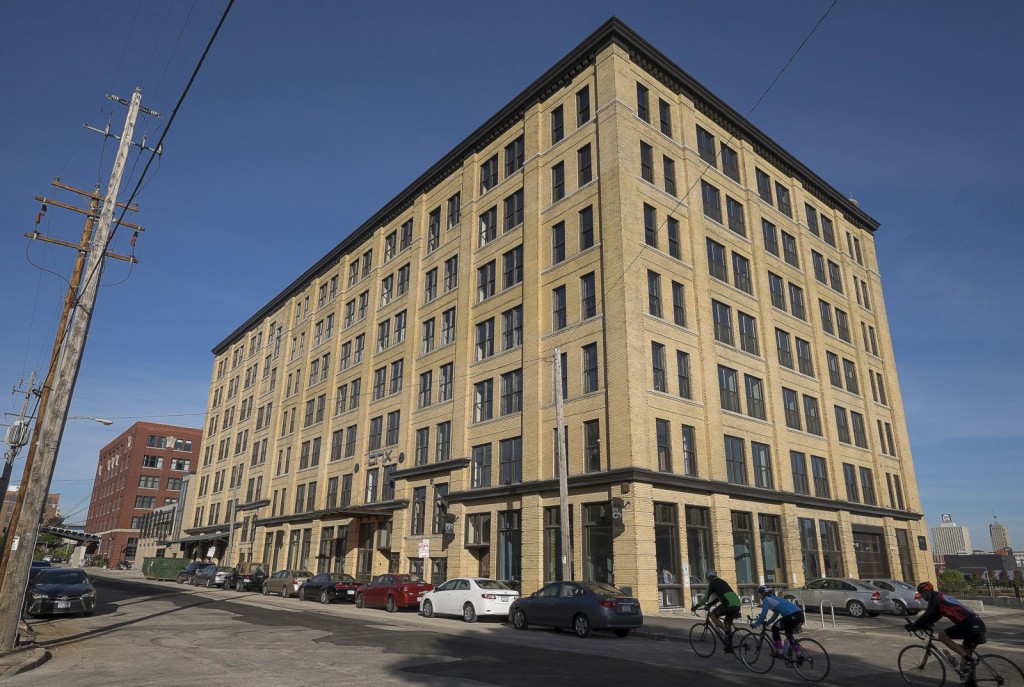 Milwaukee’s first bar with a focus on hard cider is coming soon. Lost Valley Cider Co., will open tomorrow at , and will offer more than 20 ciders on tap and 120 ciders in bottles and cans. The 50-seat bar will be located at 408 W. Florida St. on the ground floor of Brix, the loft apartments converted from a seven-story former candy factory and warehouse.  Carol Deptolla of the Milwaukee Journal Sentinel adds more:

The ciders favor the crisper, tarter style of European ciders, and Lost Valley’s list includes ciders from around the world as well as from Wisconsin.

The bar will have several beers on tap, in part so it can mix a Snakebite, the cider-beer cocktail. It also will have mead on tap and will serve wine…

For snacks, Lost Valley will have popcorn from Knight’s Gourmet and cheese from nearby Clock Shadow Creamery…

Hours will be 3 to 11 p.m. Wednesdays and Thursdays, 3 p.m. to midnight Fridays, noon to midnight Saturdays and noon to 8 p.m. Sundays. Lost Valley will have patio seating for 20 or more.

You’ve heard of a micro-brewery, but what about a nano-brewery? Milwaukee’s newest brewery and taproom, Urban Harvest Brewing Co., will celebrate its grand opening June 1-4 with four days of special “cele-brew-tion” events, as its dubbed them. The new brewery, located at 1024 S. 5th St. in Walker’s Point, will host a series of events that include local celebrities serving beer, beer-food pairings suggested by Milwaukee chefs, appearances by Wisconsin beer experts, Milwaukee’s most popular food trucks, entertainment and more.

As the company’s press release explains, its head brewer Steve Pribek has been selling his beers at local events, including the Milwaukee Brewfest and World of Beer Festival. After a little more than two years of searching for a home for their brewery and taproom, Pribek and business partner Mark Kaminski remodeled and then quietly opened Urban Harvest Brewing Company’s doors in April. “Utilizing a 2-barrel system,” the release notes, “the brewery has a core lineup of 10-12 diverse beers as well as special release and seasonal offerings that will be rotated in throughout the year. The spacious, light-filled taproom features seating for 80, exposed cream city brick and a permanent theater with seating for 50.”

The week’s many events begin on Wednesday with Mayor Tom Barrett offering a city proclamation and serving up the inaugural tap of a new beer, Bourbon Barrel-less Brown beer. The final event is on Saturday, June 4, when the taproom opens at 2 p.m. with $3 pints until 5 p.m. Starting at 3:30 p.m. in the theater, for $5, patrons can sample 6 beers as part of a presentation by brew master Steve. From 5-6 p.m., you can meet celebrity tap masters (and thoroughly experienced beer quaffers) Dave Reid and Jeramey Jannene from Urban Milwaukee. Check the press release for the full details.

Brew City will be seeing several new breweries open in the next few months. Coming soon is Good City Brewing, the first urban brewery on the East Side, which is scheduled to open on Friday, June 17 at 2108 N. Farwell Ave. There will be a taproom, bar, private dining area and much more to check out. Onmilwaukee.com’s Lori Fredrich adds:

The space, which was designed by Rinka Chung Architecture, sports exposed cream city brick and industrial elements along with an open feel. Half-walls separate production from the taproom, giving visitors a view (and a whiff) of the brewing process.

A concise menu, which will accommodate both those looking for a full meal and others looking for a snack to enjoy with their beer, is inspired by the offerings at other taprooms like Surly in Minneapolis, the Wicked Weed in Nashville and Founders Brewing in Grand Rapids, Mich.

The much-anticipated return of Pabst Brewing Co., originally scheduled to open this summer, is now slated for the fall. The new microbrewery and tasting room will open at 1037 W. Juneau Ave. in the former First German Methodist Church. Costs for the project are expected to exceed $4 million and create over 120 jobs. OMC’s Bobby Tanzilo reports:

The work will transform the long-shuttered building into a small batch brewery, tavern and restaurant that will serve as the new Milwaukee home for Pabst Brewing Co.

Among the exterior work on tap is a new roof, with wood shingles replacing the current asphalt ones; repairs and repainting of windows; cleaning and restoration of masonry; rebuilding of missing buttress bases on the east side of the building; paint removal; and the installation of new doors.

A two-story addition will be create about 800 square feet – for a prep kitchen, elevator, bathrooms and storage – on the empty lot out back, between the old church and Milwaukee Public Schools‘ facilities and maintenance headquarters to the south. A 2,300-square foot patio will occupy the southernmost portion of the lot.

Milwaukee will soon have another health-focused grocery store. Fresh Thyme Farmers Market is a growing retailer that bills itself as a store that helps people eat good food at good prices, and stocks local products and hires local residents. The market will open on Wednesday, June 8 at 7 a.m. and is rewarding the first 250 customers with some unique treats. The press release from the company offers more details:

As part of the planned grand opening celebration… Fresh Thyme will host a Family Festival and Neighborhood Block Party on Saturday, June 4 in front of the store. There will be a cookout, live music, face painting and more.

Located just a few blocks north of the future Bucks arena site, on N. King Dr., Urban Beets Cafe and Juicery is serving up delicious, meatless options. The popular vegetarian-style cafe, which also offers smoothies and juices, will be expanding into the vacant Park East Lofts storefront next door. The owner of the shop, Dawn Balistreri, is hopeful the expansion will be completed by early fall. Deptolla adds more:

Customers take one of the 18 seats, or take their order to go. No sidewalk seating (yet), but benches are available at a sweet little pocket park a block south.

Smartly, the menu is small to fit the work space behind the counter, but Urban Beets packs a lot of flavor into the three sandwiches, a salad and raw tacos. (For breakfast, the cafe serves up smoothie bowls and bagels with smoky cashew cream cheese.)

On the way out of Urban Beets, customers can feel as if they’re taking care of the Earth in addition to themselves: They sort their trash by whether it will be compost, recycled or landfill.

Looking for a new place to enjoy a cold drink with friends? The old Shorewood Village Pub at 4488 N. Oakland Ave. has a new occupant. Cloud Red, which opened Wednesday, is co-owned by Rebecca Goldberger. Goldberger was a member of the ownership team at the former Roots restaurant. Cloud Red offers both drinks and snacks to customers. Ann Christenson of Milwaukee Magazine reports:

The 16-tap beer lineup features quite a few Wisconsin names, including Lakefront, Brenner, Black Husky, New Glarus and O’so. The bar’s name alludes to the term for a gathering of blackbirds (which also refers to the former Shorewood pub’s status as a gathering spot for locals). Hours: Tues-Fri 3 p.m.-2 a.m.; Sat-Sun 11 a.m.-2 a.m.

Sources say that Yield bar, located at 1932 E. Kenilworth Ave., closed last night because a new lease agreement could not be reached. Once news spread about the sudden closing, customers gathered and threw a “borderline block party” at the bar. Co-owner Patrick Kapple plans to open another bar in the future, but nothing is planned at the moment. Molly Snyder adds more in her OMC blog:

Kapple says they were unable to come to a lease agreement with the new owners of the building. “It’s an amicable parting of ways,” says Kapple.

The East Side bar and grill opened in 2005 and, allegedly, there is already a new owner and concept in store for the space.