Approach focuses on victims of childhood trauma, which can help in rehabilitating criminals.

By Dee J. Hall, Wisconsin Center for Investigative Journalism - May 23rd, 2016 04:53 pm
Get a daily rundown of the top stories on Urban Milwaukee

Stress, violence and one caring adult

David Murphey, senior research scientist for Child Trends, an organization that collects data and studies aimed at improving the wellbeing of children, told journalists gathered last fall that about 40 percent of U.S. children have multiple exposures to violence, either as a victim or witness.

If such experiences are frequent or severe, they can generate “toxic stress,” which causes learning difficulties, emotional problems, antisocial behaviors, poor health and even early death.

But a single supportive adult “can buffer the effects of toxic stress,” Murphey said. 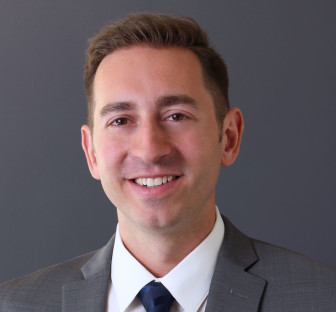 Michael Lamb, executive director of Turnaround for Children, said when he was a young teacher at a school on Chicago’s South Side, many of his students were locked in a “fight, flight or freeze” mode from exposure to trauma.

Because of his own inexperience dealing with traumatized children, Lamb said a mock trial exercise went badly awry, triggering a strong response in students not accustomed to “healthy debate that doesn’t escalate.”

“Upon the first point of disagreement, all of the students started throwing books at each other. It was chaos,” recalled Lamb, who runs the program’s Washington, D.C. effort to help struggling schools serve traumatized students.

“Students who’ve been through a lot of trauma … their bodies are flooded with cortisol, and the impact is both on the learning part of their brain as well as the immune system,” Lamb explained, referring to the hormone released in response to stress. “So every day it feels like the bear … is right in front of them because of what’s in their brains.”

Lamb brought his mother into the classroom to calm his students and to humanize him as a teacher. He discovered one antidote to his students’ violent reactions: Adults they could trust. 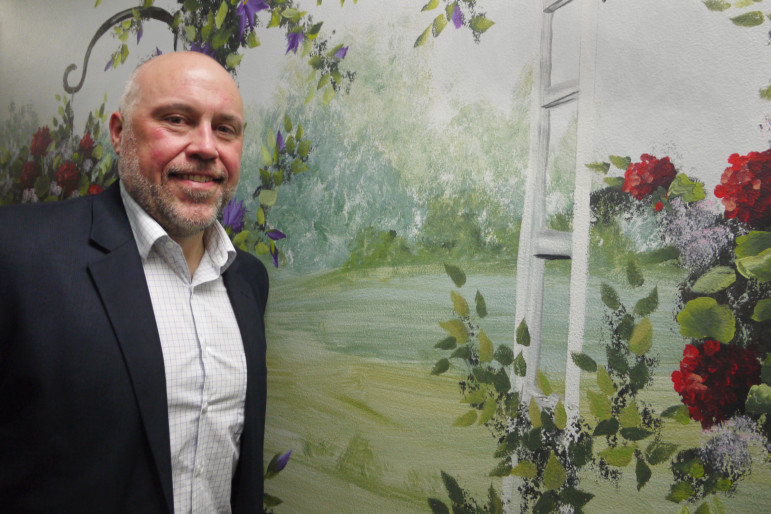 Chuck Price, director of the Waupaca County Department of Health and Human Services, says his agency uses a trauma-informed approach in all of its services. Here, Price is seen in the agency’s brightly painted hallway, which is designed to minimize trauma to children who have been maltreated. Photo by Dee J. Hall of the Wisconsin Center for Investigative Journalism.

As the new director of the Waupaca County Department of Health and Human Services, Price believed the approach endorsed by Walker could become a “cornerstone” for the agency. His department manages mental health care, Medicaid, food assistance, child welfare, juvenile justice and other services for some of the county’s 53,000 residents in this central Wisconsin county.

Now, trauma-informed care is infused in everything his department does.

Trauma-informed care is the reason for the brightly painted murals on the second floor of the Waupaca County complex leading to rooms where child victims of abuse or neglect are interviewed. Price points to a nature scene with 17 ladybugs hidden in it. He called it a “distraction element” designed to “make that a little less of a traumatizing walk.”

The approach also is reflected in the patience that operators at the regional call center are counseled to use as they help frustrated recipients access public benefits.

And it is in the partnership that the agency develops with parents facing loss of custody of their children after allegations of child abuse or neglect. 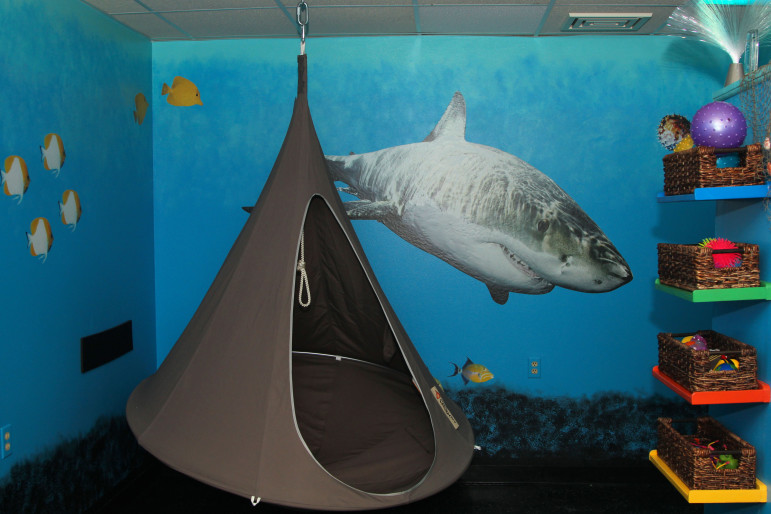 A hanging chair is seen in the sensory room at Waupaca County Industries, a vocational rehabilitation facility for adults with disabilities in Manawa run by the Waupaca County Department of Health and Human Services. The space helps members calm down if they become over-stimulated or emotionally triggered while at work — providing them with a safe place to calm themselves so they can return to the job. Photo courtesy of Lisa Grasshoff of Waupaca County Industries.

Season Westphal, who manages the foster care program, said Waupaca County uses the principles of trauma-informed care by taking a “much more humanistic approach” to allegations of child maltreatment.

“That means calling somebody over the phone to schedule an appointment, asking permission to talk to them and their child, as opposed to just doing it without permission or going to the school and interviewing children without parental consent,” Westphal said. “We’ve found that that isn’t the best way to develop a good working relationship with the family and to earn trust with people.”

At the call center, operators are instructed to help resolve as many problems as they can themselves rather than pass a client off to another person or department, said Chris Machamer, the county’s economic support coordinator.

“Many times, they (clients) are angry because they think their benefits are messed up or because they themselves maybe didn’t follow through,” Machamer said. “And so, using a trauma-informed approach, rather than putting the blame back on them … we take the approach of, ‘How can we help you now?’ ”

This more cooperative stance has resulted in a sharp reduction in formal complaints lodged against the agency, Deputy Director Shannon Kelly said. The department had an average of 10 to 12 per year in the past. There has been just one complaint in the past two years, she said.

“We’re being upfront. We’re not a ‘gotcha’ kind of agency — no surprises back to the folks we’re serving,” Price said.

Other metrics also are positive. Before taking a trauma-informed approach, just 21 percent of children in out-of-home placements were returned to their family home within 12 months. Now 73 percent are reunited within a year, said Alisha Haase, who manages ongoing child protection for the county.

Staff turnover also is down, Kelly added, while measurements of job satisfaction and well-being are up.

Price said the agency’s goal is “making sure that we’re leaving individuals and families better off having received services or having interaction with our agency than when they found us.”

After 83 arrests, a stubborn crack addiction and 19 years living on the street, someone finally asked Tonier Cain, “What happened to you?”

The question, posed just over a decade ago, probably saved her life.

Since then, the deeply religious Cain has become an evangelist for trauma-informed care. She has spoken at conferences across the country and around the world. Her life has been featured in movies and an autobiography, “Healing Neen.” 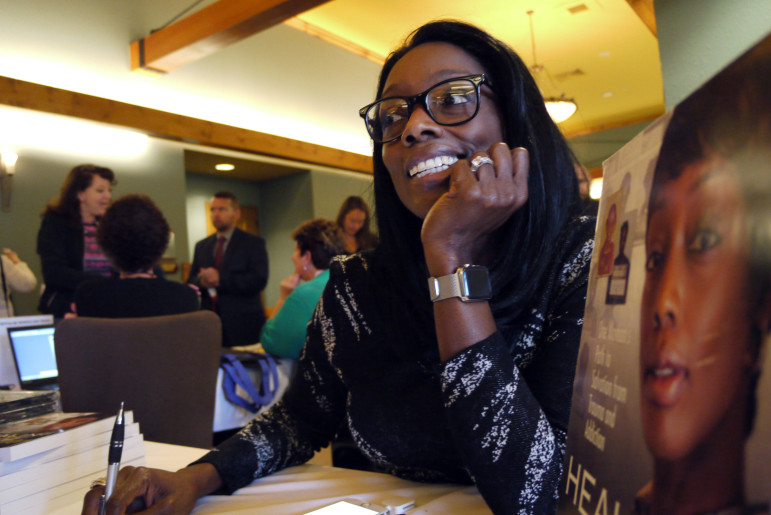 Tonier Cain signs copies of her autobiography, ‘Healing Neen,’ during a statewide conference in the Wisconsin Dells on using trauma-informed care to help children overcome adverse childhood experiences. A former homeless crack addict, Cain travels the world advocating the use of trauma-informed care to help children and adults heal from negative experiences. Photo by Dee J. Hall of the Wisconsin Center for Investigative Journalism.

Cain told her story to hundreds of juvenile court and child welfare officials in late September during a conference on trauma-informed care in the Wisconsin Dells.

She was the oldest of eight children of a single, alcoholic mother who sometimes left them alone and hungry for days in their apartment in Annapolis, Maryland. Her mother’s boyfriends sexually assaulted her in the bedroom she shared with her younger siblings.

Although she was often unwashed — earning the nickname “Pissy Neen” at school — Cain developed an obsession with tooth brushing “to get rid of the smell of the men that forced themselves around my face, in my mouth.”

At age 9, she began drinking. At 16, she married a man eight years older. Cain thought he would save her. Instead, her husband “beat me down until he saw blood” during fits of jealous rage. At age 19, desperate for an escape, Cain discovered crack cocaine.

Her life spiraled even further out of control. 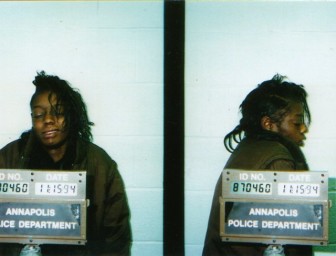 A mugshot from the Annapolis Police Department in Maryland shows Tonier Cain on Nov. 15, 1994. Cain blames childhood victimization for her crack addiction, 19 years living on the streets and 83 arrests. Her life was transformed after she was treated for her childhood trauma, Cain says. Photo courtesy of Healing Neen Inc.

She traded sex for drugs, beer and cigarettes. Four times Cain gave birth; each time, she was forced to give up her baby. Another baby died in childbirth while Cain was strapped to a gurney during a jail stint.

Cain estimated she went to drug treatment 30 times. One of her counselors raped her. He was sent to prison. When not locked up herself, Cain lived on the streets and ate chicken scraps from the garbage “like a rat.”

Eleven years ago, while incarcerated and expecting another child, a therapist finally asked Cain about her past. Telling her story was cathartic. The two worked through the pain — the physical and sexual abuse, her mother’s abandonment, the lost babies.

“I have four kids walking this earth. If I pass them in the streets, I wouldn’t even know it. How do you heal from that?” Cain asked.

“I was believed,” Cain said, “so I was able to begin healing that hurt.”

Today, Cain has multiple homes and a “really smart” fifth-grade daughter — the baby she was expecting when she halted the multi-generational cycle of trauma in her family. Cain’s life now revolves around her child and telling her story — and getting people in charge to listen.

She showed one of her police mugshots on the screen of the conference room in the Dells.

“If this woman was yet again in your system … 83 times you’ve seen her show up. … My question to you this morning is simply this: ‘Would you be able to look at her and see me today?’ ”

She ended the talk with this:

“Where there’s breath, there’s hope. Treat the trauma. You will get results.”

Reporting for this story was supported by the Solutions Journalism Network and the Center on Media, Crime and Justice. The nonprofit Wisconsin Center for Investigative Journalism (www.WisconsinWatch.org) collaborates with Wisconsin Public Radio, Wisconsin Public Television, other news media and the University of Wisconsin-Madison School of Journalism and Mass Communication. All works created, published, posted or disseminated by the Center do not necessarily reflect the views or opinions of UW-Madison or any of its affiliates.