Approach focuses on victims of childhood trauma, which can help in rehabilitating criminals.

By Dee J. Hall, Wisconsin Center for Investigative Journalism - May 23rd, 2016 04:53 pm
Get a daily rundown of the top stories on Urban Milwaukee 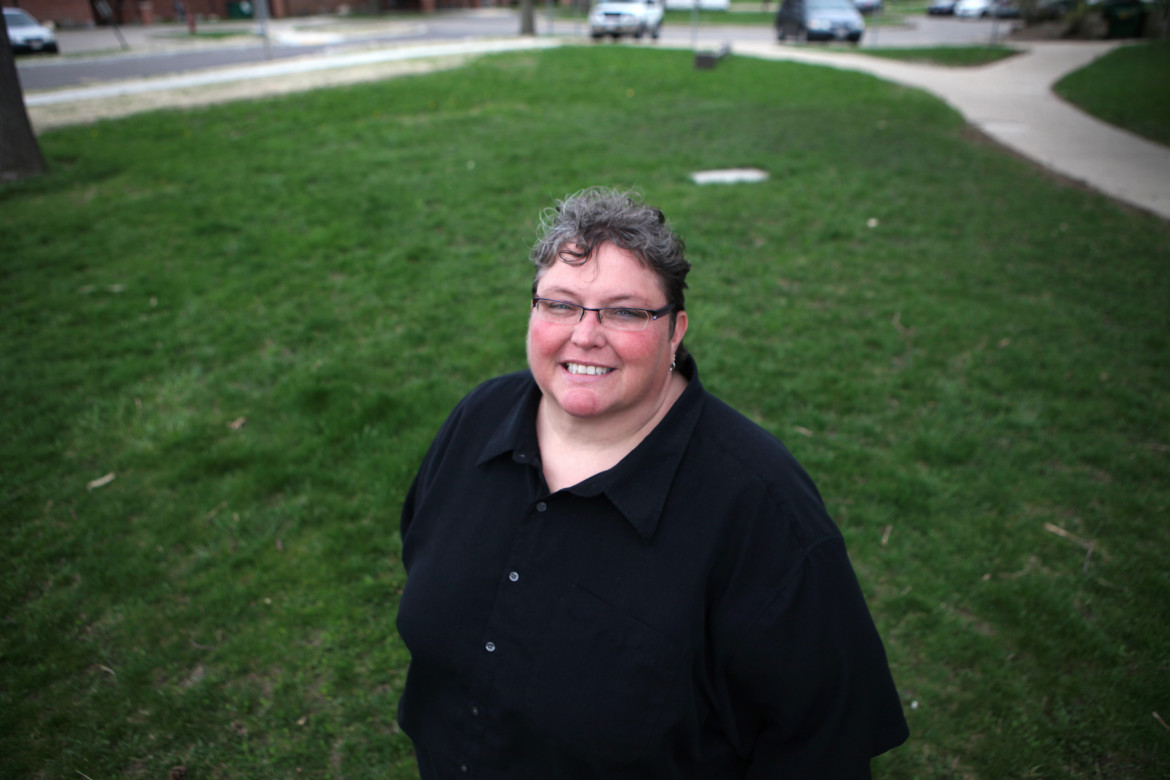 Tamra Oman, 45, from Fond du Lac, trains others in how to use trauma-informed care. Oman, who experienced a variety of traumatic experiences in her youth, says the approach helped her heal. Photo by Coburn Dukehart of the Wisconsin Center for Investigative Journalism.

The daughter of an alcoholic, abusive father, Tamra Oman remembers trying to protect her mother from his violent outbursts, even though she was not yet in kindergarten.“I remember him choking her over the sink. Spitting out blood. Blooding coming out all over the place and landing on me,” Oman said, recounting one incident in her early childhood in Crown Point, Indiana. “I remember going into this situation trying to save her. Trying to jump on top of him and save her.

“I can remember what I was wearing,” she continued. “That’s what trauma does. It also gets you stuck in those places.”

It was one painful episode in a childhood punctuated by sexual and physical assaults and teenage years tinged with cocaine use. Oman, now 45 and living in Fond du Lac, said she went to drug treatment more than a dozen times.

Wisconsin is part of a growing nationwide movement to adopt trauma-informed care, or using information about children’s troubled pasts to improve mental health, provide social services and address a wide range of criminal justice problems. Research has shown that adverse childhood experiences can lead to a lifetime of problems.

For her part, Oman said the trauma she suffered as a young child set her on a path of self destruction. She sabotaged success by dropping out of a series of colleges. She committed crimes. Oman finally ended up in prison, including two and a half years at Taycheedah and Burke women’s prisons for forgery and writing bad checks.

“If you would’ve addressed my victimization as a child, I probably never would have ended up in prison,” Oman said. “I became a perpetrator — not intentionally, but because that (trauma) never healed.” 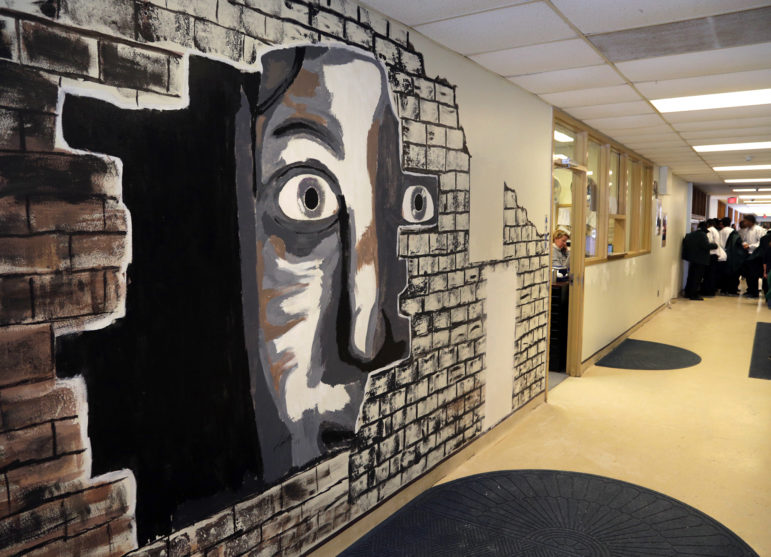 Students change classes in a hallway at Lincoln Hills School for Boys in 2013. Beginning in 2012, staff at Lincoln Hills and Copper Lake School for girls were trained in and began using trauma-informed care principles. Photo by Dan Young of the USA TODAY NETWORK-Wisconsin.

In Wisconsin, trauma-informed care burst into the news in recent months with investigations into allegations of abuse at the state’s juvenile prisons in northern Wisconsin.

Some staff there have blamed the more empathetic trauma-informed approach for breakdowns in security and discipline that they said led to assaults on workers and offenders. Those involved in the training counter that the technique was not properly implemented at Lincoln Hills School for Boys and Copper Lake School for girls.

For Oman, facing the trauma of her childhood helped her to heal. Her brother Brian, four years older, never “connected with his own pain.” Although he appeared successful on the outside, in 2000, Brian used a gun to take his own life.

Oman now works at the Wisconsin Resource Center for mentally ill offenders in Winnebago. She advocates and uses trauma-informed care to help people like herself move forward from terrible childhood experiences.

“Really, what we’re trying to do, essentially, with trauma-informed care is to bring humanity back into human services, slow down and treat people with care, compassion and respect,” said Scott Webb, who has been leading Wisconsin’s efforts to spread use of trauma-informed care across the state since 2014. 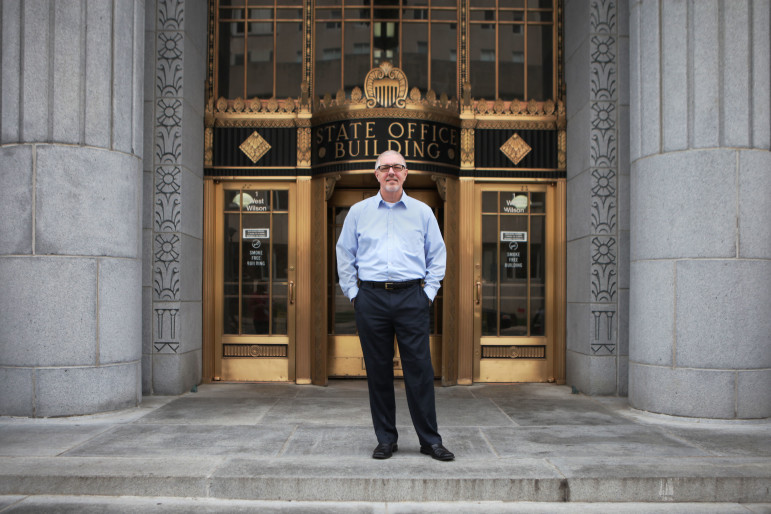 Scott Webb is trauma-informed care coordinator for the Wisconsin Department of Health Services. DHS is one of several state agencies advocating for the use of the more ‘humanistic’ approach in providing social services, working with juvenile inmates and dealing with traumatized children in school settings. Photo by Coburn Dukehart of the Wisconsin Center for Investigative Journalism.

The state Department of Health Services spends about $112,000 a year, primarily on a contract that includes Webb’s salary from the University of Wisconsin-Madison and related expenses, to encourage and train agencies to use trauma-informed principles.

The Department of Children and Families, through its Wisconsin Trauma Project, also is rolling out trauma-informed care. In 2015, the initiative provided training to 77 clinicians and 123 child welfare workers and caregiver parents in trauma-informed principles in Jefferson, Rock and Walworth counties.

The state Department of Public Instruction this year is training staff at 30 schools in how to use trauma-informed care to help children learn and heal as part of the School Mental Health Initiative, and another 30 will join the program in 2017, according to Nic Dibble, a consultant with DPI’s school social work section. The effort is being financed with discretionary federal funds, he said.

The state Office of Children’s Mental Health also is working to raise awareness among the public and service providers on how to recognize and help traumatized children.

The office is taking advice from “parent partners” such as foster mother Tina Buhrow of Chippewa Falls. Buhrow said one teenager who had experienced a lot of trauma recently summed up the approach well: “Stop labeling the child. Instead, understand their story.”

Trauma is common. Between 25 and 61 percent of all children and adolescents in the United States have experienced trauma, a percentage that increases with age, said Ernestine Briggs-King, research director for the National Center for Child Traumatic Stress at Duke University.

Speaking to a group of journalists in New York City last fall, Briggs-King defined trauma as a physical or emotional experience threatening the life or integrity of a child or someone she or he loves. Such events can evoke feelings including terror, powerlessness and being out of control.

Trauma-informed care “acknowledges and responds to the role of trauma in the development of emotional, behavioral, educational and physical difficulties,” she said.

Exposure to trauma is often measured in 10 adverse childhood experiences, or ACEs. They cover a range of bad circumstances children can experience: an incarcerated parent, hunger, divorce, domestic violence, parental substance abuse, and physical and sexual abuse. Some practitioners have added more ACEs to the deck, such as witnessing a shooting or other violence in their community.

“As the number of traumas increases, so do the number of problems,” Briggs-King said at the symposium on violence prevention by the Center on Media, Crime and Justice and the Solutions Journalism Network. 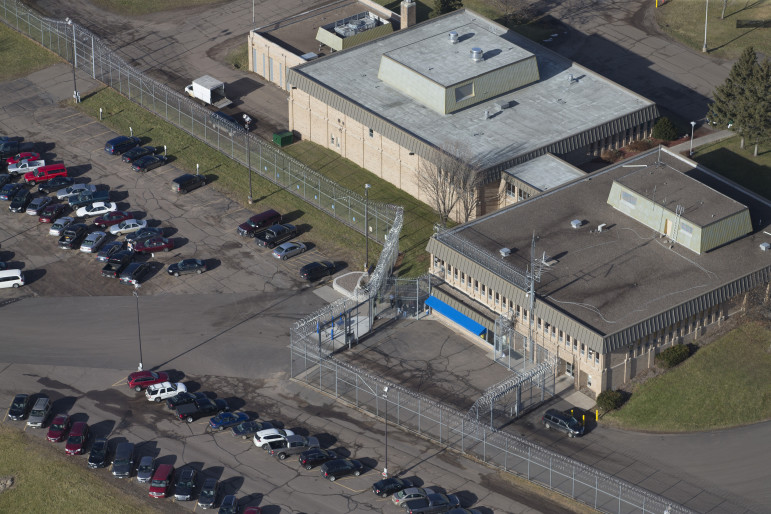 The complex including Lincoln Hills School for Boys and Copper Lake School is seen in this 2015 file photo. Critics charge that a trauma-informed care approach led to security breakdowns there, but advocates say Lincoln Hills and Copper Lake failed to fully implement the program. Photo by Mark Hoffman of the Milwaukee Journal Sentinel.

In Wisconsin, data from 2011-13 show 58 percent of adults reported at least one adverse childhood experience. But the results vary by race: Among respondents, 79 percent of blacks reported having one or more ACEs, compared to 56 percent of whites.

Studies have shown that adults with high ACE scores are more likely to suffer from poor health, be arrested, unemployed or have substance abuse problems. Trauma-informed care is seen as a way to halt the cycle of violence and dysfunction and improve quality of life for people who have experienced trauma.

“There’s good stuff going on around the country … which, if adopted on a larger scale, we could chip away at this problem of violence,” Briggs-King said.

A recent Centers for Disease Control and Prevention study found many of the 569 perpetrators in gun crimes between 2009 and 2014 in Wilmington, Delaware, had significant trauma histories themselves, including child abuse or neglect; emergency room visits for intentionally inflicted injuries; and involvement with the social welfare system. The study suggests finding and helping such potential perpetrators before they commit crimes.

SaintA, a private nonprofit social service agency based in Milwaukee, is a national leader in the use of trauma-informed principles. Tim Grove, chief clinical officer for SaintA, told a group of Wisconsin juvenile justice and child welfare officials last fall that the relationship between high ACE scores and certain bad outcomes is “staggering.”

Grove said a person with an ACE score of 8 or above is 4,200 times more likely to use drugs than someone with a score of 0. An ACE score of 6 or higher is associated with a 20-year decrease in life expectancy compared to having no ACEs.

“These are powerful scientific findings — not theory, not hypothesis,” he said.