By Sophia Boyd, Milwaukee Neighborhood News Service - May 23rd, 2016 10:28 am
Get a daily rundown of the top stories on Urban Milwaukee 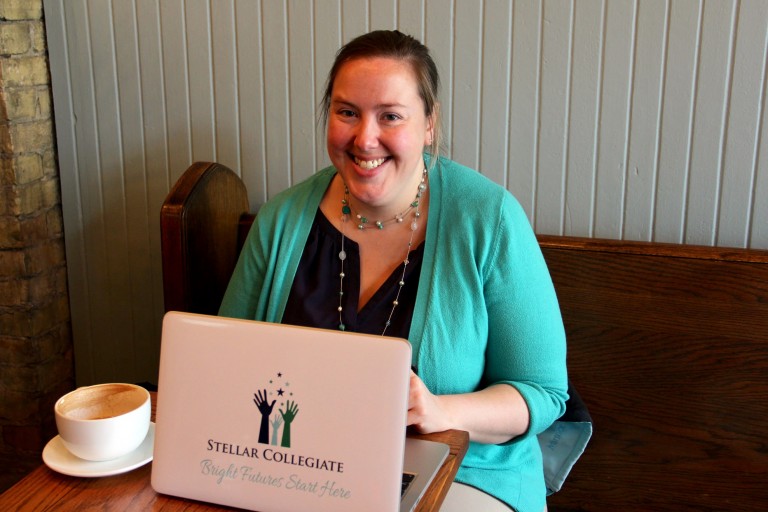 Melissa McGonegle, the school director of Stellar Collegiate, has been working for about two years to open the school. Photo by Sophia Boyd.

While the new Stellar Collegiate Charter School on the South Side is finding it challenging to attract students because of the many options available to families, School Director Melissa McGonegle expects to meet the enrollment goal by the July 29 deadline. With 10 weeks to go before the school must enroll 105 students, approximately 63 have signed up.

As part of its contract with the University of Wisconsin – Milwaukee’s Charter School Office, the school is required to enroll 105 students in K4, K5 and first-grade by July 29 – one month before the projected first day of school.

McGonegle said the enrollment has been “slow and steady” —an average of six students per week —as a result of referrals and knocking on doors. She expects that the pace will increase during the summer, and that the school will be fully enrolled by July 10.

The building, at 1115 S. 7th St. in Walker’s Point, has a capacity of about 250 students. Each year a new grade level will be added. Administrators are looking for a larger facility and plan to move after the second year.

McGonegle said it took about two years to find a temporary location, build the board of directors and hire teachers. 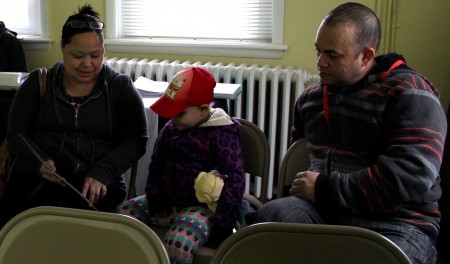 Every Wednesday Melissa McGonegle hosts an information session for interested parents such as Aida Marquez (left) and her daughter, Micaela (middle). Photo by Sophia Boyd.

She chose the South Side because she specializes in English language learners (ELL). At this point, 75 percent of the students enrolled at Stellar Collegiate are Hispanic. While it is not a bilingual school, some of the students are from bilingual households. McGonegle said parents want their children to preserve their Spanish language skills and learn English too. Students who may be more fluent in Spanish than English will be taught in regular classrooms.

Literacy is the foundation of the curriculum at Stellar Collegiate. “Being strong readers means they can be whatever they want to be,” McGonegle said.

Students will have an eight-hour school day. Three hours a day are committed to reading and writing to make sure every child is at grade level in reading by third grade. According to McGonegle, achievement in third grade is a determining factor of a child’s success rate in high school and college.

Aida Marquez enrolled her 5-year-old daughter, Micaela Marquez, because of the school’s small size. Marquez home-schooled Micaela last year when she was undergoing chemotherapy, and was concerned that she might fall behind at a larger school. Marquez also applied to be a Spanish teacher at Stellar Collegiate.

Five lead teachers and two co-teachers will be hired for the first year. For every two grade levels there are three teachers who specialize in a specific subject: literacy, math/research, which includes science and social studies, and special topics such as art, physical education and Spanish. Students will be broken into groups of five to eight to focus on a specific subject while the rest of the class works on online educational programs for a maximum of 45 minutes.

Dennys Williams found out about Stellar Collegiate when Laura Rangel, the outreach manager, asked to hang a flier where she works. She said she appreciates Stellar Collegiate’s size and the fact that it is a charter school. She has enrolled her daughter, Rumelee Rooks, who will be 5 years old in July.

Stellar Collegiate has hosted events for the families that have enrolled to gather input on uniforms, as well as the start and end times of the school day.

“We want them to feel connected to the school,” McGonegle said.

Williams said she has been involved with Stellar Collegiate since day one and plans to stay committed to the school for the time her daughter is there.

“I’m really excited to see what the (teachers) are going to bring to the table,” Williams said. “I know she’s going to learn a lot.”