M.C. Fischer & Sons had already made the transition from horses to auto. 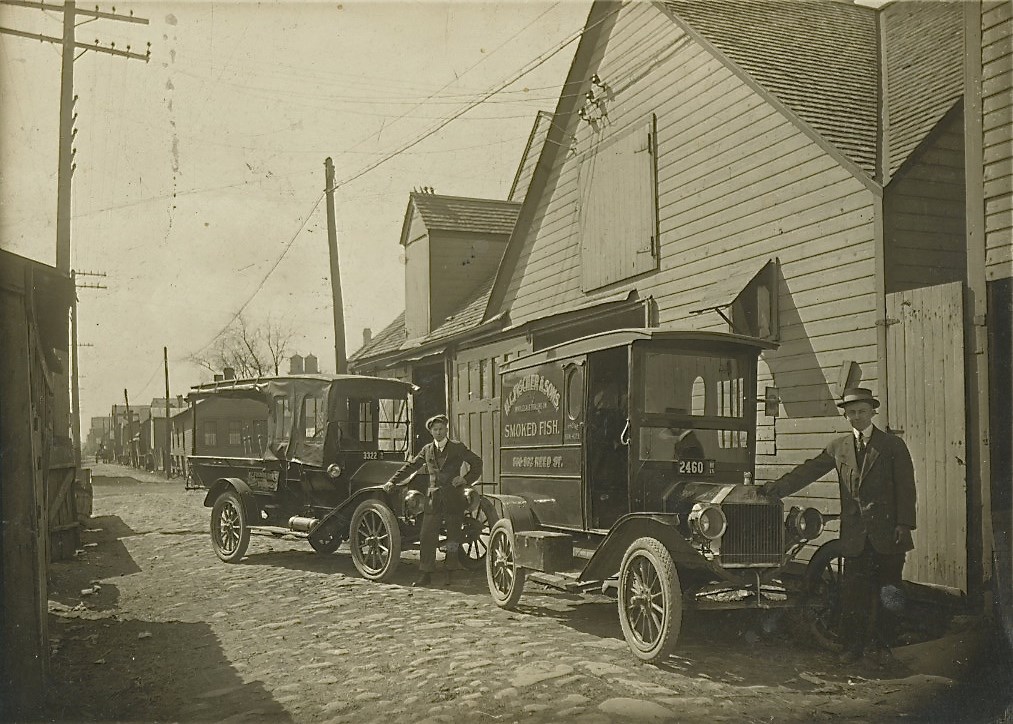 After 1910 horse-drawn vehicles would begin to be replaced with automobiles and trucks. The changeover took while, however, and really would not be completed until the 1920s.

This is a photograph of some of the earlier trucks. The license plate dates the photo to the year 1915. These were the trucks of M.C. Fischer & Sons, who dealt in smoked fish.

By the time this photo was taken the population of sturgeon had declined markedly in Lake Michigan and the commercial fishing primarily involved an abundant harvest of herring and chubs (which were often grouped with herring) and trout, with a considerably lower poundage of whitefish and perch, as one history of Great Lakes fishing shows. Trout and whitefish had long been smoked, the report notes, but C.H. Fischer of Milwaukee was credited with introducing smoked chubs in the 1880s, which became very popular.

Was this gentleman related to M.C. Fischer? And what kind of fish was his company peddling? We don’t know. But smoked fish were very popular.

The address for this photo is listed as 510-532 Reed St. This apparently is a view of the alley behind Reed St.

In old Milwaukee many of the streets had different names, including those east and west of the Milwaukee River. Also the east/west street numbers differed on the north and south sides of the city. In the 1920s the street names east and west of the river were harmonized by the Milwaukee Common Council and the Wright’s Milwaukee City Directory of 1931 was the first with the readjusted street numbers. Under the new system, 1st Ave. on the South Side now became S. 6th St. and the streets that became 1st St. through 5th St. were renamed. That included Reed St., which became S. 2nd St.

So M.C. Fischer and its trucks would have to change the address listed. The site where the smoked fish business was located is on S. 2nd St. about a half block south of Orchard St. and on the east side of the street.