Proposal will develop last remaining site in the original "Park East." But is it needed? 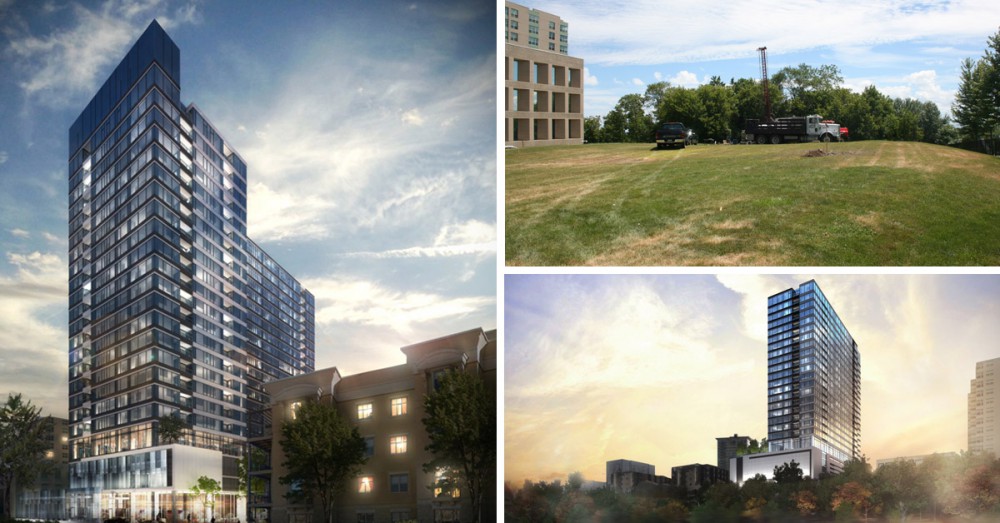 It might be time for the city to rename Ogden Ave. to Mandel St. Running for just under a mile, E. Ogden Ave. is fronted for nearly its entire length by properties developed by Barry Mandel and the Mandel Group, and the firm is now seeking to build a capstone tower at its eastern terminus. The Milwaukee real estate giant is working with the city to finalize designs for a 235-unit, 24-floor apartment tower dubbed Portfolio.

The building is proposed to contain a mix of studio, one, two and three bedroom units targeted at empty nesters. Chicago-based Solomon Cordwell Buenz is serving as the architect on the project. This building wouldn’t be that company’s only tower in Milwaukee; they’re also leading the design of Northwestern Mutual‘s tower under construction at 777 N. Van Buren St.

The project site, long owned by Mandel, fits into a theme common to their most recent developments – being as close to water as possible. Ten years ago Milwaukee had plenty of those sites, but Mandel has systematically developed many of them. Their riverside or lake-facing properties include the Belay Apartments and Cambridge Commons on E. North Ave., the Rivercrest and Trostel Square developments on N. Commerce St., Lake Bluff and University Club Tower condominiums on N. Prospect Ave., The North End complex on N. Water St. and the Marine Terminal Lofts and DoMUS apartments on E. Erie St. It’s probably easier to tour the firm’s work by boat. Portfolio won’t buck the trend, with a location as close to Lake Michigan as private development can be built. 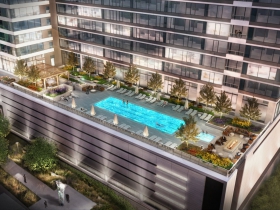 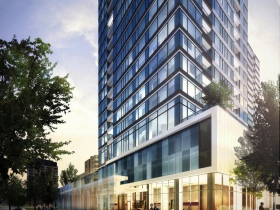 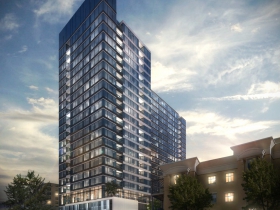 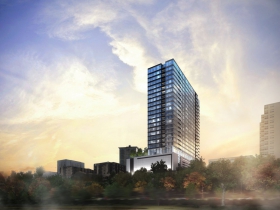 The site at 1350 N. Prospect Ave. was once home to the Bauhaus-style building that housed the Layton School of Art. That building was demolished in 1970 for the planned Park East Freeway that would encircle Downtown with an elevated highway. Despite relocating, the Layton School of Art never recovered, going from high profile to closed by 1974 (though the school was essentially transformed into the Milwaukee Institute of Art & Design). We first reported Mandel was exploring building a tower there in August of 2013 when soil testing equipment was spotted on the site.

Mandel Group was an early pioneer in healing the wound caused by the widespread demolition for thankfully unbuilt freeways. The firm acquired the stretch of vacant land from N. Jefferson Ave. to the lakefront along E. Ogden Ave. in the late 1980’s. Starting in the early 1990’s the firm filled most of the stretch with the East Pointe Apartments and marketplace, as well as other low-rise or town home apartment and condominium projects. The company also made a significant contribution towards expanding Burns Commons.

The site, for a short time, was planned to be a complex that was to include two 27-story towers financed in part by the Bradley family. The complex would have stretched from N. Prospect Ave. to N. Farwell Ave. between E. Ogden Ave. and E. Lyon St. and literally would have been built above the freeway. That plan, which included luxury apartments, died with the proposed freeway, and today most of that proposed development is occupied by the Mandel-developed The Franklin Apartments. The towers would have been designed by prominent Milwaukee architects Fitzhugh Scott and David Kahler. Scott was also a consultant on “aesthetic values” of the planned freeway for the city and remarked that the planned interchange for the site was to be “the most beautiful urban freeway in the country.”

The cost of construction has been subject to bit of inflation since then. The two towers would have cost between $15-$20 million to build in 1968, Mandel hopes to break ground in the spring of 2017 with an estimated cost of $100 million.

Who Said Anything About Millennials?

Mandel has certainly done a good job targeting younger generations, and my recent tour of The North End’s Aperture apartment building highlighted many features targeted at the Millennial tenant. They’re also zigging where others zagging though, billing DoMUS in the Historic Third Ward as an apartment building targeted primarily at empty nesters looking to downsize. Portfolio will follow in the footsteps of DoMUS, with the firm noting that “the physical amenities and life‐style services at Portfolio will be geared toward empty nesters.” What are those amenities? The firm lists them as “an outdoor pool deck, fire‐pit, and lounge overlooking Lake Michigan, clubroom area with internet cafe, billiard room, fully‐equipped fitness/wellness center with yoga studio, golf‐simulator, pet spa, and dog‐run.” Mandel’s press release announcing the project also plugs the building’s accessibility to the lakefront, and to the Milwaukee Streetcar which will stop one block away on N. Farwell Ave. and E. Ogden Ave. A planned future extension of the streetcar would take it right past the building’s front door.

As I recently reported, Millennials are clearly the driving force in Milwaukee’s apartment boom, but Baby Boomers still make up a notable share of the market. Mandel seems to be wisely angling to capture both markets. 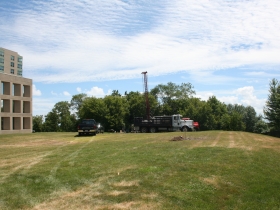 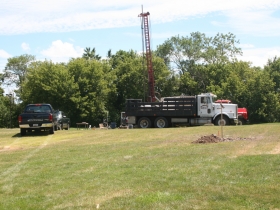 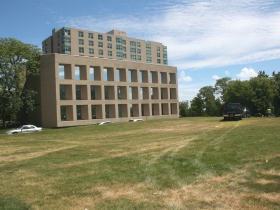 An active debate on Urban Milwaukee’s Facebook page has raised the question of “do we really need more luxury apartments?” From the perspective of the city’s budget, yes. The tower would have an estimated annual property tax bill in excess of $1 million. That money will pay for a teacher, a police officer and a librarian, and, with the hundreds of thousands leftover, a whole lot of other government services. Plus, as we’ve repeatedly reported, apartment vacancies are at their lowest point in a decade.