How Walker Won The Rural Vote

Resentment of Milwaukee and Madison was a key factor. Excerpt from new book. 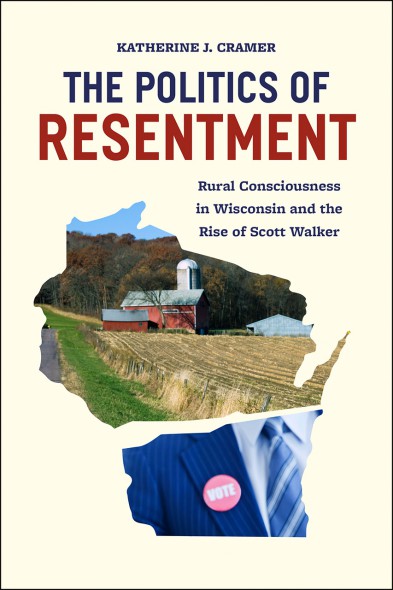 On June 5, 2012, the day of the gubernatorial recall election, with Gov. Scott Walker challenged by Mayor Tom Barrett,  I had lunch with a group of women who get together once a week [in a central West Wisconsin town]. It was my first time meeting with them….

I started out asking them, “I just want to know what your big concerns are in these days.” They brought up the economy, social security, the fact that “senators and congressmen . . . have no idea what small, rural America is like,” their lack of trust in politicians, their belief that the recall is a waste of taxpayer money, and their belief that we need more women running things. Then I asked:

KJC: Well, this is not a loaded question. Do you feel that either political party is better at representing your concerns, Republicans or Democrats?

Beverly: I don’t think so [referring to whether either party is better at representing concerns].

Beverly: We don’t know who we’re going to vote for if we do go vote. I think it’s just going to stay the same way it’s going to be—

Sandy: Or get worse.

Beverly: They promise us a lot, but once they get voted in the system?

Sandy: Do you want Walker to do more of the things he said he was going to do?

Dolores: And that’s why people are upset…I think . . . I don’t know. I do not know if much will change, if anything, if the other party gets in, but Barrett is known for not doing a whole lot, you know, for our type of community. You know he’s for the big city; he’s from the big city. And he’s taken Milwaukee right down the tubes, why would we want him in here, running the whole state, when he can’t run a city? I think in that way, I give Walker a lot of credit for standing up for what he believes and saying this is what I told you I was going to do and this is what I have done. Now he may have not gone about it the real, ethical right way, but at least he made an effort to do something.

These women understood themselves as people from rural Wisconsin. Maybe neither party represented their concerns, but they sure were not going to vote for Barrett, because they saw him as a city guy who did not understand places like their town.

Later on in the conversation, I had an opportunity to ask bluntly about the rural-versus-urban divide in Wisconsin. I asked them to tell me more about “this thing that you all talked about today that I hear everywhere in the state, outside of Madison, Milwaukee, people do not feel listened to. They feel as though nobody really is taking into account, their concerns, you know, I hear that in [this town], too, and it’s sad.”

Dolores: It is.[….] I heard someone said once, and I worked in the school system, that you can’t expect much of farm kids, because they don’t excel in the sciences and all of that.

Dolores: I just about dropped my teeth and I thought, the expectation should be the same for these children as it is for any other child anywhere else in the state. And I was getting that from someone who should have known better.

KJC: And that was someone teaching here? My goodness.

Dolores: Yeah. Yeah. Local school system, who said that. I was not expecting them to do that. I was just appalled.

Gladys: But then some managers will hire farm children before other children because they know how to work.

Dolores: They know how to work.

On the day of the recall election, these women made sense of the tumultuous politics of their state through their sense of themselves as rural people whose communities are disrespected, ignored, and left to fend for themselves.

When you look at the world this way, it makes sense to support a politician who conveys that finally someone is paying attention to small-town folks like you. It makes sense to vote for a person who has taken measures—even controversial measures—to scale back the resources going to public employees. We can lean back and wonder why anyone who can hardly afford to pay for health care, whose local schools are struggling, and who teeters on the edge of needing welfare assistance would vote for a candidate who openly pledges to roll back government spending. Or we can listen closely and notice that having a worldview that rural people are treated unjustly leads in an understandable way to support for a politician like Scott Walker.

We have a politics of resentment when political actors mobilize support for cutting back government by tapping into resentment toward certain groups in society. I have laid out in some detail how a place- and class-based identity like rural consciousness [an identity as a small town resident, combined with a perception that people in small towns do not get their fair share of decision-making power, resources, or respect] provides fertile ground for resentment-based arguments to flourish. But what does such mobilization look like?

It looks, at times, like a train. A high-speed train, to be exact. Under Democratic Governor Jim Doyle, Walker’s predecessor, Wisconsin had successfully applied for federal stimulus money to build a high- speed rail system between Madison and Milwaukee.

Walker took on the train as a major symbolic element of his 2010 gubernatorial campaign. He portrayed it as an $810 million “boondoggle” that would create only 55 permanent jobs. He argued that it was an excessive government program that taxpayers could not afford. He gave people many reasons to support his decision to give back the $810 million to the federal government as he refused to let the construction on the rail system go forward. But he especially focused on reasons that would resonate with those having a rural consciousness. He asserted that spending money on this project would directly take money away from regions of the state outside the Madison and Milwaukee metro areas. Here is an example of his talking points, from the first debate in the gubernatorial primary:

If you look at what Jim Doyle and Tom Barrett [Walker’s Democratic opponent] have put on the table, in spending $810 million on a high-speed train line between Milwaukee and Madison with no assurance that it will go to Eau Claire or La Crosse or anywhere else—it’s just about those two areas—and it’s about taking that money, money that will cost . . . the citizens of Wisconsin up to $10 million per year—according to their numbers, I think it will actually be much more—that’s $10 million that doesn’t go to fix the road that goes up from West Salem through the cutout up to Black River Falls, it doesn’t fix streets in La Crosse . . . that’s money that’s taken away from our local roads and our bridges and our other transportation needs today.

The rail system was not the only way Walker mobilized rural consciousness in support of small government. He used anti-city rhetoric in other ways, too. He said that he was taking on “the political machine down in Madison” (emphasis added here, because he was in Milwaukee when he said this, which is not north of Madison). But he also said he was taking on the political machine in Milwaukee.

Walker invoked animosity toward the cities, especially Madison, in more subtle ways as well. Take, for example, these remarks about his tenure as county executive, made during a question- and-answer session at the American Enterprise Institute, a conservative think tank, on January 6, 2012:

We were able to rein-in abuses of things like overtime and other excesses out there by no longer having opportunities where, in our case, some of our state employees could literally call in sick on their shift and then come back to work the next shift on overtime. Or bus drivers in places like Madison that made $150,000 or more because of overtime.

Walker [also] demonstrated that he identified with small-town Wisconsin. In an appearance on the television show Fox and Friends, he said “I grew up in a small town” and asserted that such a background gave him “a little bit of that brown-bag common sense.”

A Wisconsinite did not need to look at the world through the lens of rural consciousness for these arguments to resonate. They could hear Walker pledge to take on the political machines in Madison and Milwaukee and could cheer that someone was finally going to get government to listen to hard-working taxpayers like themselves. But for people who had an identity with places beyond the orbit of resources and power called Madison and Milwaukee, calling into question the high salaries of bus drivers down in Madison and reminding people of the good values of small-town Wisconsinites likely had an extra appeal.

An excerpt from The Politics of Resentment: Rural Consciousness in Wisconsin and the Rise of Scott Walker, by Katherine J. Cramer, which can be purchased at local bookstores or online at the University of Chicago Press.

4 thoughts on “How Walker Won The Rural Vote”