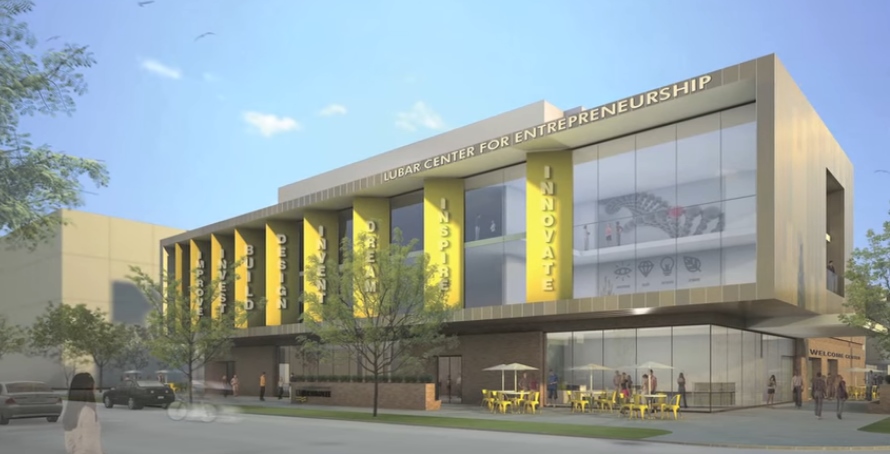 Sheldon and Marianne Lubar donated $10 million to establish the Lubar Center for Entrepreneurship which would expand UWM’s entrepreneurial programs.

Economist Steve Deller gets why state policymakers favor big businesses for expanding the Wisconsin economy. “It’s easier to get your head around working with, say, an Oscar Mayer or Mercury Marine or an Ashley Furniture,” the UW-Madison professor says. “They’re tangible. You can see them.”

And, of course, the big guys curry favor with political spending.

But Deller’s research with colleague Tessa Conroy shows that most new jobs in the Badger State come from new businesses and not from these sometimes-struggling giants. “They’re important and will continue to be important,” he acknowledges, “but we need to be putting more of our resources into fostering entrepreneurship. That’s the bottom line.”

This was not earthshaking news. National studies dating to the 1970s detailed the importance of startups in job creation. Just last September, the business-minded Ewing Marion Kauffman Foundation released a report affirming that new and young companies are the primary source of job growth in the United States. “Not only that, but these firms also contribute to economic dynamism by injecting competition into markets and spurring innovation,” the Kauffman researchers declared.

Looking at 2012 data, Conroy and Deller found that new business startups, the youngest possible enterprises, created 26.9% of new jobs in Wisconsin, while young businesses age one to five years produced 19%. In contrast, older firms (from 11 to 25 years old) accounted for 22%.

“The policy implications are clear: Limited resources should be focused on new small business startups,” they write.

But that’s not the Wisconsin way. The “Good Jobs First” study, also funded by the Kauffman Foundation, listed Wisconsin among the 14 states studied where economic incentives are tilted to large companies. For example, researchers found that 80% of the $132.2 million Wisconsin granted in tax credits for job creation went to large companies.

Deller and Conroy point out the conundrum of favoring big, established companies. They may offer more stability, pay better and provide superior benefits, but “their stagnant growth trajectory provides few new employment opportunities.” (Others would counter that select mature companies, like software giant Epic, do generate lots of good-paying jobs.)

Dane Stangler, Kauffman’s vice president for research and policy, tells me that new businesses play a critical role in the economy. “They are the key entry point for young workers, for people returning to the labor force and for people at the margins of the economy. They are a stepping stone.”

On paper at least, Wisconsin has tried to increase the flow of venture capital to startups. But almost three years after the Badger Fund of Funds was approved by the Republican-controlled Legislature and signed into law by Gov. Scott Walker, its modest $25 million in state funding and $8 million or so in private capital have yet to be put to work.

In contrast, the 2011 Wisconsin manufacturers’ tax credit,  another tax abatement program for business, will be fully phased in this year and will “virtually eliminate” the Wisconsin income and franchise tax on manufacturers’ net personal and corporate income, according to the big-business lobby Wisconsin Manufacturers & Commerce. This tax break, which skews to larger manufacturers and their owners, will be worth hundreds of millions of dollars in the years to come.

Deller, in discussing his suggestion for growing the Wisconsin economy, sounds like a football coach stressing the fundamentals — You gotta block better! You gotta tackle better! Forget the Hail Mary passes to out-of-state corporations on the long-shot chance they might relocate here. (They seldom do.) Better to offer practical business services that could benefit the 100 startups that might be sprouting at any one time in a region: Make sure that local bankers are connected to the Small Business Administration and to other entrepreneurial resources; work with UW Extension and local chambers of commerce to provide professional-development programs; encourage retired execs to mentor the newbies; play up networking opportunities.

“A growing number of communities get it,” says Deller. “They’re looking at the small-business startups already in their backyard.”

He’s got a point. Wisconsin’s politics may be hyper-divided. But once you step away from the Capitol’s Barnum & Bailey circus you pretty much find a consensus that economic development could best be done regionally and locally through a partnership of business, community and educational leaders. Especially by deploying the assets of the 26-school UW System and the 16 technical colleges across the state.

Republican-leaning business leaders like John Torinus and Tom Hefty make this case. So does progressive Joel Rogers of COWS, a policy and research institute in Madison. “It’s the natural infrastructure to use,” says Rogers. “Get all that working together. Make it really easy for kids to move across the educational spectrum. Set up industry credentials they can earn for job placements. Senior year in high school is usually a drag. Get those kids involved too.”

This strategy, of course, is what the “Wisconsin Idea” was once all about: putting the state’s educational resources in the service of the public good.

This story first ran in the Madison weekly, Isthmus.