Angelo’s Piano Lounge Amps It Up 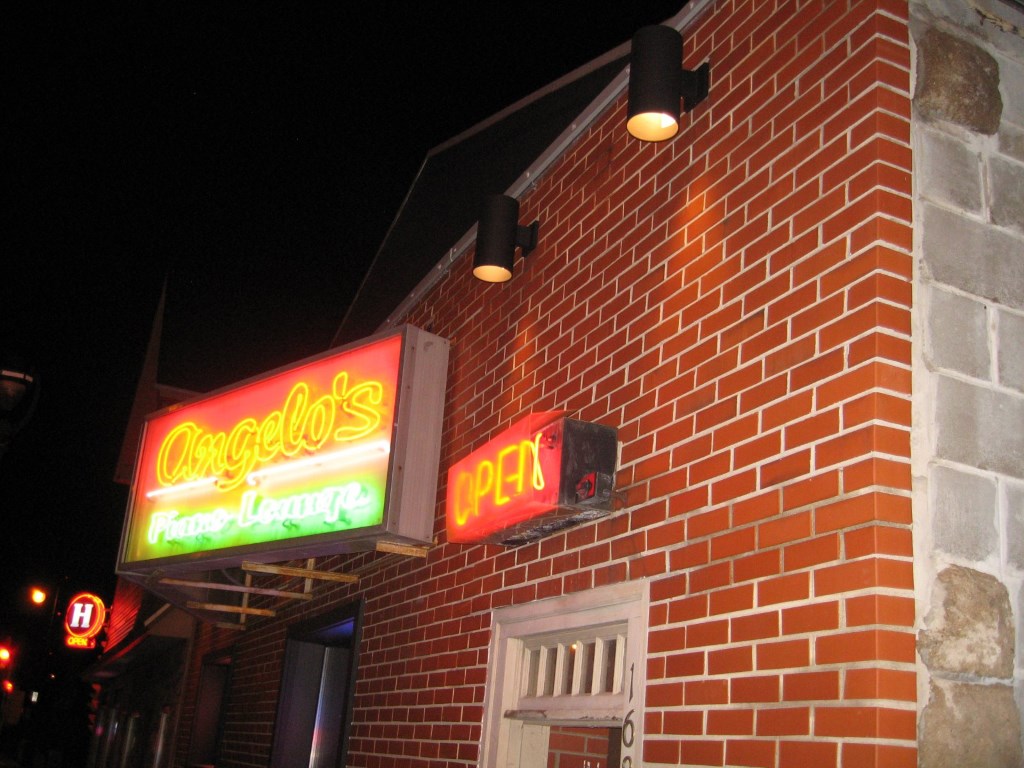 Late in 2015, with his health declining, Angelo Mortellaro sold his Angelo’s Piano Lounge, 1686 N. Van Buren St. to Nate Fried, the owner of Hybrid Lounge, which is located next door at the corner of E. Brady St.

The bar had only been intermittently open in the years previous as age and health took its toll on the owner, who also went by the name Angelo Martellano. He died in January, 2016 at 79.

By that time the bar was in the midst of a remodeling project that literally blew the roof off the old place. Fried spent about $100,000 on the joint and none of it on fancy stuff — it all went for infrastructure in the tavern space, which dates to 1927. Fried kept the floor plan and the business plan intact at the lounge, which has since reopened to the public now that the dust has settled and there’s a roof on the bar.

The building had long been plagued by plumbing and drainage issues, and Fried took on the challenge of dealing with what had been identified as “chronic long term water infiltration” problems as far back as 1989. The tavern itself is actually an extension of the basement of the home to the rear. That structure was itself constructed in two parts, with the north half dating to pre-1894, and the south half in place by 1910. The area is hilly as things go here in Milwaukee, and street grade changes left the houses about 15 feet above street grade. It also left rainwater with little place to go.

In 1922 owner Tony Germana took out a permit to raise the buildings, to extend the basements to the sidewalk and two create two stores in the new space. Such residential/commercial conversions of the era are numerous in the immediate neighborhood, including at the Van Buren’s Whiskey Bar immediately to the south.

Germana was to own the building for many decades. In 1934, we find a grocery store here in what had been a “pool room.” This must have been one mighty cramped pool room. It was located in a refinement of the original addition, and was joined by a barber shop to the north, with a shared central entrance, now lost.

When the city asked “what kind of ventilation” will the basement store have, the applicant answered, “wind.” Accordingly Tony Lo Duca was listed as the operator of the grocery store here in January, 1935. By June, with repeal of Prohibition well underway, the place became a tavern as it remains to this day. In 1936 the old basements were considered too short even for the basement of a Sicilian tavern, and the floors were lowered 2′ 6″. In 1948, Nu-Stone was applied to the front of the building, which had once again been more-or-less rebuilt. (Certain decorative elements remain.) In 1953 the bar got a concrete floor to replace the original wood, and a 4″ column was installed on the first floor. This column may have been to reinforce the roof, which was flat and prone to leaks, adding to the chronic water problems here.

There was a fire in the apartments in 1955, and another on October 5th, 1958, when the flames erupted under the bar. The building damage was $3,000 with $1,500 damage to the contents. There was no structural damage to the building, perhaps thanks to the concrete floor.

By 1963 the small space became Antonio’s cocktail lounge, pretty much settling into the groove it still inhabits more than a half-century later. In 1973 the storefront was altered once again, and the Nu-stone was replaced with the brick that remains today. The door was moved to the south, where it, too remains. The tavern became the “Third Generation” in 1985, attesting to the longevity of the Germana family, and then became Angelo’s on December 5th, 1989. 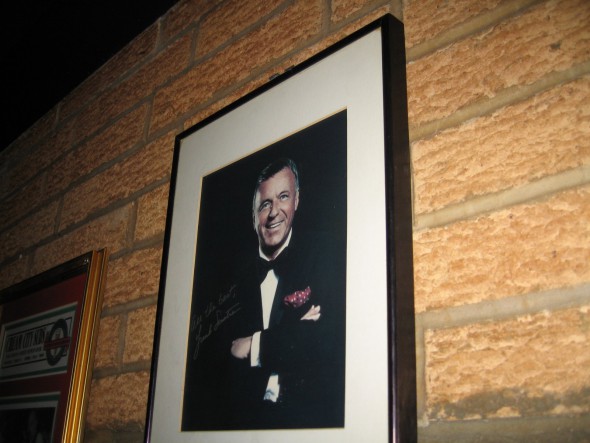 Angelo’s was a blast from the past, and the owner was a character of almost Comic Opera dimensions. He was witty, expansive, and used his cigar as a prop as much as a nicotine delivery vehicle. Angelo looked good in a vest, in a Maitre d’ sort of way, which he had once been at Snug’s in the Shorecrest Hotel.

A framed picture of Frank Sinatra hung on the wall, and does to this day. Angelo found it in a resale shop, pre-dedicated. The bar drew a clientele of the old timers and the good fellas out for a night on the town. Pianist Norma Angeli, the sister of Atty. Dominic Frinzi, played piano there for years, and folks would line up to croon a tune from the Great American Songbook.

The bar was sufficiently retro that it attracted a following of Marquette University students out for a campy time. It also became a haven for local acts like Jerry Grillo who has cultivated a lounge singer mystique over the years. Angelo’s would also be a good place to hang before or after dinner at Cataldo’s, Tarantino’s, Joey’s or Giovanni’s — all Sicilian restaurants, all a block away. All gone. 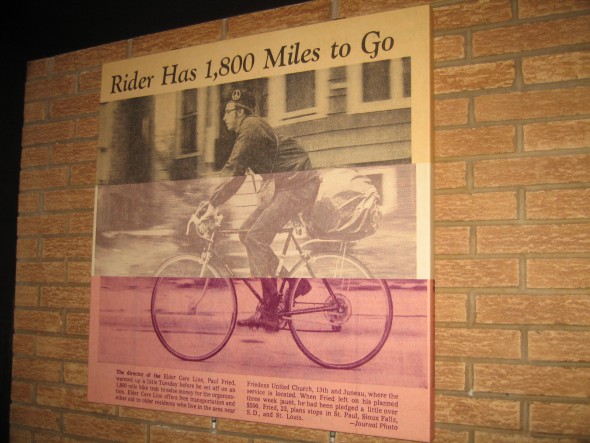 The bar is a simple set-up centered on the north wall of the 1,462-square-foot tavern, and turning around the corner for a spell. The principal decorative element is a reproduction Schlitz Lady-With-Globe lamp. Liquor bottles sit atop a simple shelf with glasses below. Outside, N. Van Buren St. is faintly visible through two small windows dressed in neon. A table in the center of the room heads south-west and has a half-dozen padded stools. To the east, the bar continues along for a bit. It has a little nook at the west end, as well, right next to a window. The south end of the small room is the piano bar. Here an electronic piano sits on its stand, and a nearby table encourages visitors to watch — or get in on — the action. The walls are mostly barren, except for an idiosyncratic newspaper article about a long-distance bicyclist from the 1970s.

Much of the place looks more-or-less the same these days, if better drained. This includes the men’s room with a curious non-symmetrical urinal of considerable vintage.

As for the music, this is where the place bears little resemblance to its Rat Pack antecedent. Patrons eager to hear forgotten Cole Porter lyrics of the racier sort must take their custom elsewhere.

Perhaps this is a matter that will change in time as the bar auditions new musicians.

However, the popular choices on recent visits bore no resemblance to the music that folks traditionally go to hear in a piano bar — a place where somebody discreetly jingles on the piano and occasionally busts out into song.

The music instead, is amplified and in-your-face, with only the piano player singing. Whereas I wanted somebody to “Fly Me to the Moon,” I got “Sweet Home Alabama,” “Stayin Alive,” “Dancing Queen,” plenty of Righteous Brothers and all the Creedence Clearwater Revival I cared to hear. 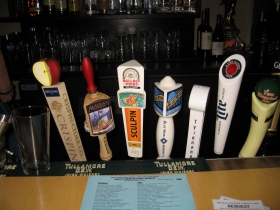 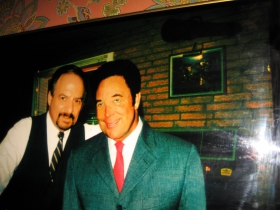 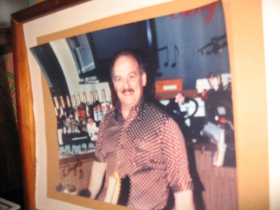 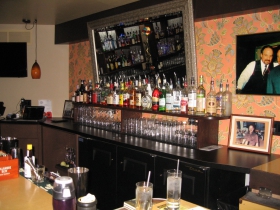 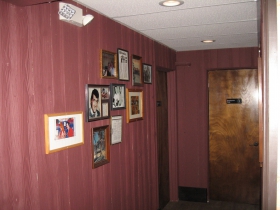 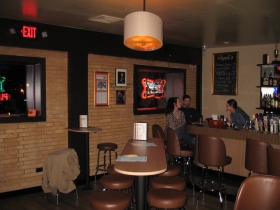 5 thoughts on “Bar Exam: Angelo’s Piano Lounge Amps It Up”