The late performance artist and professor had a big impact on Milwaukee’s cultural scene. 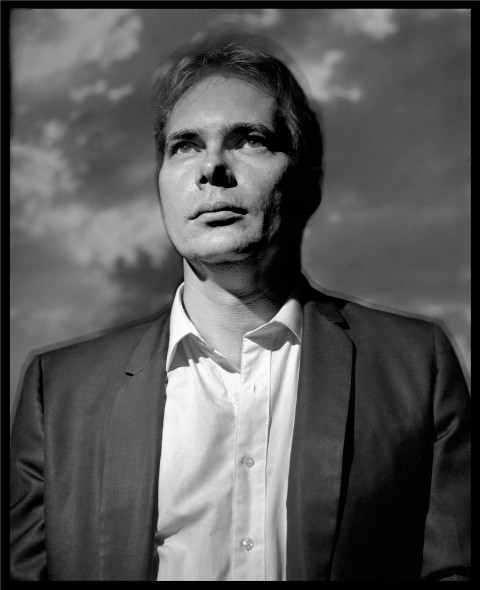 Jon Erickson was a performance artist in Milwaukee in the 1980s and early 1990s, before becoming a theater professor at Ohio State University. He died on April 5th of cancer at age 64. He was a very vivid presence in Milwaukee. Here are some recollections from critics, fellow performers and friends.

I can’t look at a swimming pool without thinking of Jon. It reminds me of our 1989 performance in the empty Gordon Park pool where Jon acted as master of ceremonies. I picture him perched on the lifeguard roost, the consummate “ring-master” in tuxedo and sunglasses, bull-horn raised in one hand. He cajoled performers and the audience with witty musings on reality, disappearance and crowd theory.

In short, he stole the show.

That is who Jon was—a fearless performer and commentator who shared his musings on the world in all its craziness, cajoling and challenging us to laugh or think or, most important, feel.

My friendship and artistic association with Jon began when Cate Deicher introduced us in 1980. I was a graduate student at UW-Milwaukee, fresh from New York City and eager for new ideas. An independent artist and fellow student, Jon shared my enthusiasm and interest in the off beat and the untried. Cate and I were among a group of dancers, performance artists and musicians who formed the Independent Performing Artists Alliance (IPAAW), a non-profit membership organization that presented 17 events over a five-year period. A brilliant, charismatic performer, Jon became an integral part of the consortium, exploring sound poetry, conceptual pieces and performance art.

Jon had been a poet, who published two booklets of poetry and whom I interviewed for Milwaukee Magazine about the Wisconsin poetry scene. He  talked about how poetry was now being written for the page rather than the voice and how it had as a result lost much of its power. He had very high standards and told me he had worked on his own poems, to hone his language, sharpen the imagery, cut it ruthlessly, and you could see that in his poetry which was edgy and ambiguous. He had cut the language to the point where he said, he would look at his own poems and think, “where do I come in?”

Staring Into the Abyss

It was 1980.  I was having a show, my first, at the Perihelion Gallery in the Lincoln Center for the Arts, which occupied a vast space in the old Lincoln High School.  It was a happening, artist-run place that presented performances, installations, and media arts.

Someone told me a poet, Jon Erickson, who was really a performance artist, might do something for the show. I remember him slumped over a desk in the hallway and pieces of paper with words on the wall.

Jon went on to do several performances at Perihelion. What can I say?  You had to be there.  They were precarious. Jon tilted over the edge and stared into Nietzsche’s abyss.

“And if you gaze into an abyss, the abyss also gazes into you.” 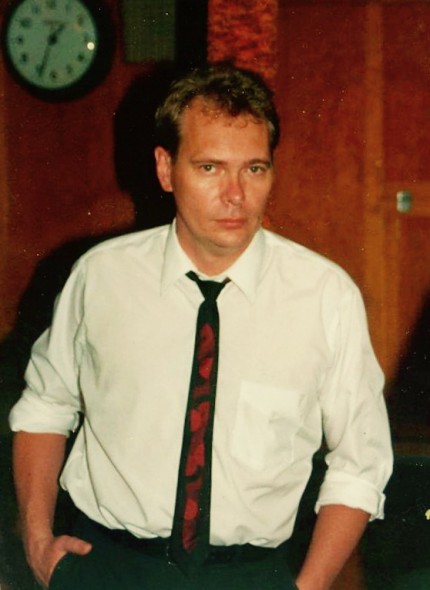 Who Is He, Exactly?

Jon fascinated me in the 1980s, his most active decade in Milwaukee. As music and dance critic for old Milwaukee Journal, I reviewed him a number of times. He was the thinking person’s performance artist. My description of “Self-Possession,” from November, 1987:

Erickson poses two slippery, scary questions: What is the self? To whom does it belong?

He sets the theme in the first few of the work’s 50 minutes: The words “be” and “have,” on placards a few feet apart, will be linked to become “behave” and kicked apart again. A projector throws Erickson’s shadow onto a white screen, which in turn is reflected in a mirror. Erickson enters, confronts his shadow and probes it with a flashlight – the more closely he examines it, the fainter it becomes. He turns the self into art, which someone else can buy and possess, by spray-painting the projected shadow black.

He drifts into a variety of personae, such as a repressed, eager-to-please child and a performer confronting his audience. But Erickson is no actor and remains himself throughout. But who is he, exactly? And who are we in this setting? What is essence and what is appearance?

“Erickson gradually developed a striking stage persona and a facility for arresting visual images. He operates as a kind of shaman, with an intense, at times almost menacing stage presence and a text that often challenges or warns audiences. His shows are keenly tuned to current events: “La Peste” examined “containment strategies” for the plague at a time when testing for AIDS and drugs dominated the news; “Self-Possession,” coming on the heels of the stock market crash, flashed an electric ticker tape in which every company’s stock price was down to zero… There is more intellectual meat in the best of his shows than in any kind of art you’re likely to see. He has a great sense of language, of how to follow it to its logical (or illogical) conclusion.”

Thinking Through His Body

Jon was one of our most gifted doctoral students in the English Department at UW-Milwaukee. He was supremely knowledgeable across the arts, literature, and philosophy. There was a kind of purity in his thought as he worked his way through difficult philosophical work—Kant and Wittgenstein, Levinas and Lyotard—and refused to compromise by seriously entertaining reigning currents of identity politics. Jon also thought through his body, the body being the elemental medium of performance. I remember in particular a walking piece, Jon walking ever so slowly along Milwaukee’s Memorial Drive, south toward the Milwaukee Art Museum.  It seemed so hot that day, his body so heavy as he put one deliberate foot in front of the other. He seemed to inhabit a different temporality. And in general Jon carried with him a sense of duration that allowed him to consider things seriously over a long stretch of time. He wanted us to slow down too. There was something enigmatic about him. He was respectful and defiant.

—Kathleen Woodward, former director of UWM’s then-Center for 20th Century Studies, now director of the Simpson Center for the Humanities at the University of Washington, Seattle. 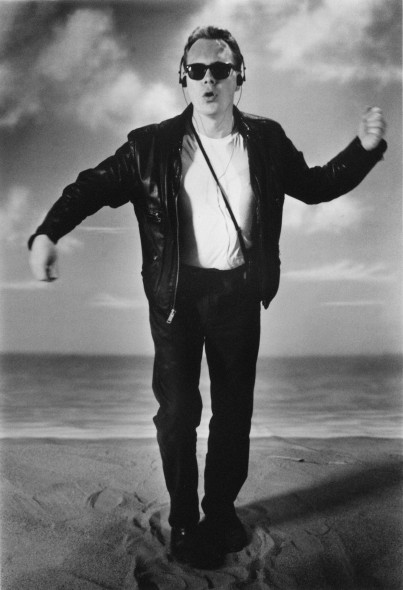 To this day, every time I scan the car radio, I recall a little gathering at Jon’s apartment on Kane Street. He waved me over close to the radio tuner on his sound system and started turning the dial.

“Listen to this,” he said, his mien serious (as always), his eyes focused as lasers. “As I go through the stations, I can tell within three seconds whether or not I want to stop and listen. I can tell within three seconds what the station is all about. They figured out how to convey that message, whether it’s talk or music. It’s science. It’s the science of sentiment.”

Jon knew more about his chosen field of literature, art and philosophy than any human I have ever met. He was brilliant, brooding, he could carry a dark cast of thought, at times pessimistic, even depressive, but never cynical. He had little patience with those he felt were intellectually dishonest, shallow, or too terminally hip. He never allowed himself the luxury of simply following intellectual fashion, and was often hard on himself and others in his demands for intellectual integrity and rigor. Yet he faced the impossibility of his life’s end and its multiple tragedies—most especially his deep worry about his deepest love, his daughter Isabel–with grace, melancholy, and a profound and inspiring faith.

Jon and I worked on Triangulation (1987) with sculptor Jill Sebastian, connecting words, visual art and dance in a surreal performance piece.  Jon tapped his teacher/preacher/ringmaster persona for the performance, notably in “The Lesson” and “The Sperm Sermon,” which offered deconstructed views of sex and identity.  Fifteen years later, the three of us reunited to revise and expand the work at Alverno College. Although Jon had long since taken a teaching post at Ohio State, the three of us had remained connected as friends and artists. I still think of us rehearsing on stage, triangulating among our chosen disciplines into new territory, still taking risks.

I will miss Jon’s wit, his perspective on life and faith, and his compelling way with words that inspired, comforted and challenged me.

A video of Jon Erickson performing “The Lesson,” part of the Triangulation show, 2001. 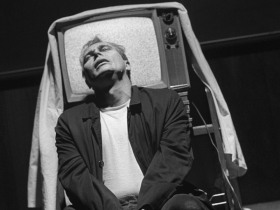 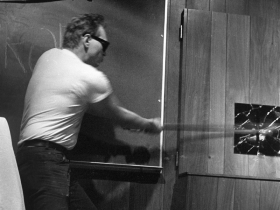 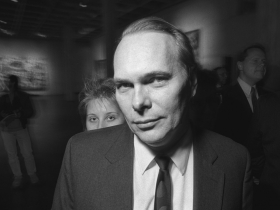 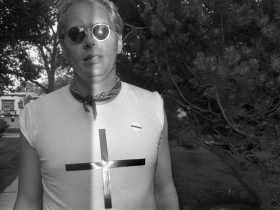 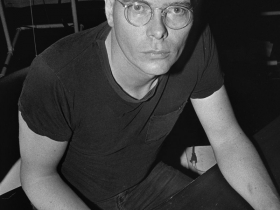 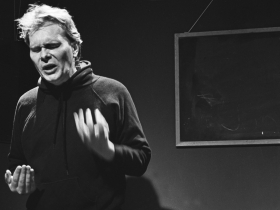