Why has Walker’s jobs plan failed? And why won’t he change his approach?

By this time, it should be evident that Gov. Scott Walker’s job-creating plan has failed. So why does an approach with so little success or supporting evidence for it continue to be followed by Walker and other conservative leaders? 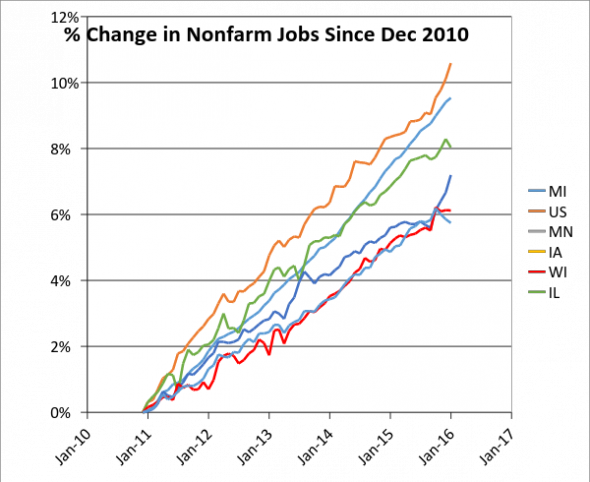 Wisconsin continues to lag behind most of its neighboring states and the nation in job creation. The graph to the right shows percentage growth since the end of 2011 in Wisconsin and states bordering us. While Wisconsin has added jobs since the Great Recession, it has done so at about half the rate promised by candidate Walker in 2010.

Wisconsin’s only competitor for the bottom of the list is Illinois. Illinois has struggled with the worst-funded public employee pension system in the nation. Finding a solution has become nearly impossible because of an impasse between its Republican governor and Democratic legislature. By contrast, Wisconsin’s public pension system has long been among the best-funded in the nation.

One point of pride has been Wisconsin’s unemployment rate which came through the recession about one percentage point below the national average. As can be seen in the next graph, that advantage has been shrinking as other states’ unemployment has been dropping more rapidly than Wisconsin’s.

Despite the lagging performance, there’s no sign that either the governor or the legislature are bringing fresh thinking to Wisconsin’s economic challenges. Instead Wisconsin continues to follow what has become the orthodox GOP economic prescription for prosperity. 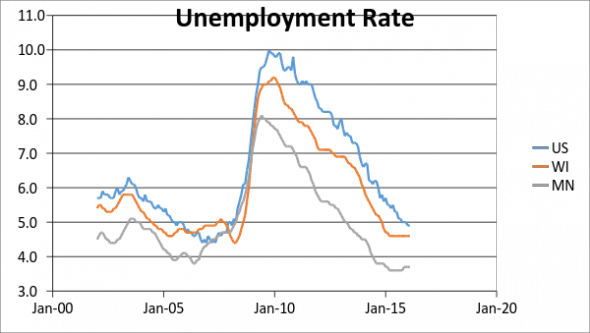 This prescription is detailed in Rich States Poor States, put out by the American Legislative Exchange Council. The latest edition, published in early 2016 and using 2015 data, places Wisconsin at 13th best among the states in its “Outlook” rating, based on the state’s economic policies. These policies are heavily skewed towards redistributing income from those at the bottom of the economic ladder to those at the top. For instance, it gives states high marks for regressive income taxes—and the best marks for no income taxes, for low top marginal rates, and a low minimum wage.

Yet ALEC’s report shows that Wisconsin, though it has the 13th best policies, has struggled economically and ranks 43rd place in Economic Performance.

Two states that received considerable attention for their radical efforts to reduce income taxes were Kansas under Governor Sam Brownback and Louisiana under Governor Bobby Jindal. An article earlier this month from the Washington Post’s Wonkblog reports on Louisiana:

Louisiana stands at the brink of economic disaster. Without sharp and painful tax increases in the coming weeks, the government will cease to offer many of its vital services, including education opportunities and certain programs for the needy. A few universities will shut down and declare bankruptcy. Graduations will be canceled. Students will lose scholarships. Select hospitals will close. Patients will lose funding for treatment of disabilities. Some reports of child abuse will go uninvestigated. 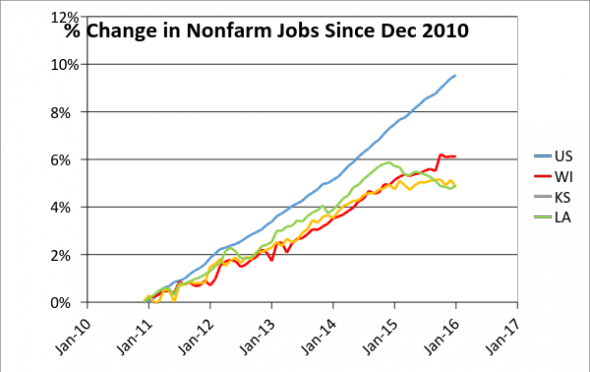 Also earlier this month, the Kansas City Star reported that “the latest disastrous Kansas revenue report immediately spelled trouble for colleges, universities and other state services.” Brownback had promised that “our new pro-growth tax policy will be like a shot of adrenaline into the heart of the Kansas economy. It will pave the way to the creation of tens of thousands of new jobs …”

Despite such failures, despite the dearth of evidence that ALEC’s prescriptions actually work, there is little sign policy makers in states like Wisconsin actually learn from experience and consider alternative policies. For example, Rich State Poor State quotes Senator Leah Vukmir, Assistant Majority Leader in Wisconsin and 2016 ALEC National Chairman:

“State policymakers across America depend on Rich States, Poor States to provide an annual report on their current standing in economic competitiveness. Hardworking taxpayers want their states to follow the best policy solutions that will lead to greater economic opportunity for all. This publication provides exactly that roadmap for economic success…”

Vukmir is at least correct that some state policy makers continue to promote the policies pushed by Rich State, Poor State as the answer to economic growth. Which leads to two questions: (1) why doesn’t the model work? and (2) what accounts for their continued popularity?

In recent years, better government data has allowed researchers to explore where new jobs come from. The conclusion, widely accepted by researchers who’ve studied the data, is that startup companies are the main net creators of jobs.

A recent report from the Center on Budget and Policy Priorities summarizes the results from a number of recent studies:

The Wisconsin policies for job growth—and those promoted widely on the right—are based on several assumptions. Most important is the assumption that “job creators” will respond to lower income taxes by creating more jobs.

One problem with this assumption is that fast-growing young companies usually do not have a lot of net income. Typically their rapid rate of investment does not leave a lot of room for taxable profits.

There is also an assumption that low taxes will cause out-of-state companies to move into the state. For example, at the beginning of his term as governor, Walker made very public efforts to exploit Illinois’ pension problems to encourage firms to relocate to Wisconsin. Not surprisingly, given research that most job growth is home-grown, these efforts did not make a significant impact.

These policies also ignore the other side of the equation—the cuts in government programs that result from cuts in taxes. These can make the state less attractive both to firms and to the potential entrepreneur deciding where to live.

The question, then, is why such policies remain so popular despite the lack of evidence they create jobs. Why do governors and legislators inflict pain on their populations—cutting education, environmental protections, and often raising more regressive taxes—without convincing evidence that these programs will bring more jobs?

In theory, these regressive policies are presented as a means to an end—increasing jobs. But the very wealthy people who fund the various think tanks and other institutions that promote these policies, the regressiveness of the policies becomes a desirable feature—and an end in itself.

The simplest explanation for the failure of the Wisconsin jobs plan—and others of its ilk—is that it was never really about creating jobs. Rather, the underlying purpose was to further transfer income and resources to very wealthy people.