How We Bicycled to Paris

That would be the Town of Paris, then on to Kenosha, on our Spring Classic 2016 ride.

By Dave Schlabowske, Bike Federation of Wisconsin - Apr 1st, 2016 10:16 am
Get a daily rundown of the top stories on Urban Milwaukee

After five hours and 22 minutes riding 90.4 miles while averaging a rolling speed just shy of 15 mph in near constant rain with temperatures of almost 40 degrees, getting one flat tire, drinking two water bottles plus one Ginger Monk, eating one Landjäger and three bags of Sport Beans, I can put my first Spring Classic of 2016 in the books. With almost the full group making it to Paris, I think I can speak for everyone when we count Wheel & Sprocket to Paris as a fun, successful ride. 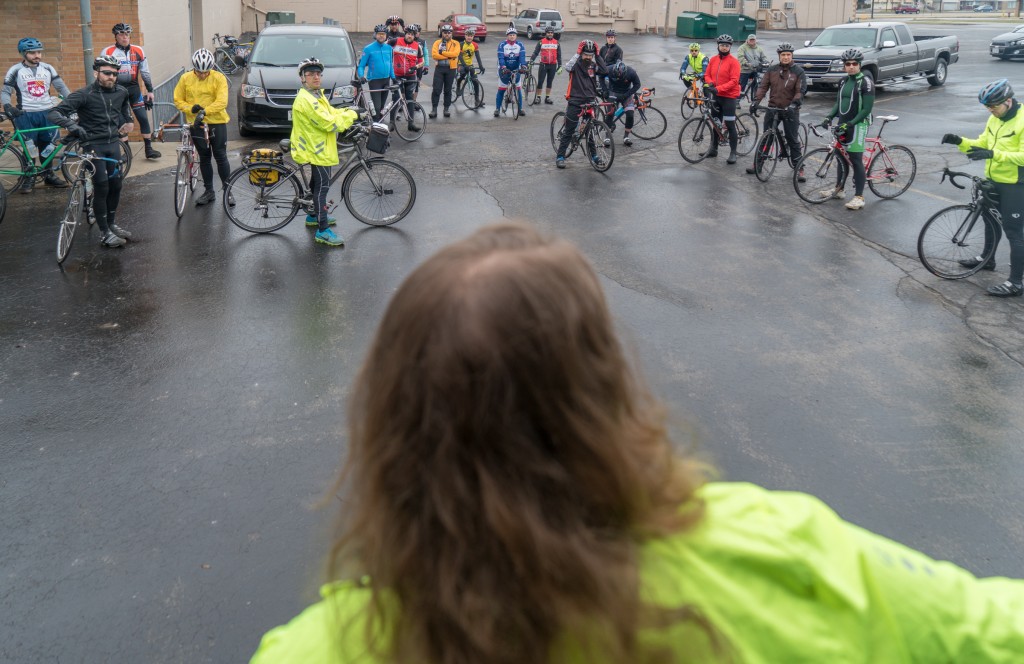 Amelia Kegel giving the welcome and pre-ride safety talk: Ride to the right, two up or single file; try not to overlap wheels, signal intentions, keep a steady pace, use your lights, have fun!

We started from the back parking lot of the Wheel & Sprocket in Hales Corners with bright spirits despite the grey, threatening skies overhead. It is always easier to begin a ride without actual precipitation, even if you know there is rain in your future.

The folks at Wheel & Sprocket created the route on RideWithGPS, distributed printed maps and cue sheets, and Amelia Kegel led out the stalwart pack for about 20 miles where she had to turn around to get back to the Hugh Jass Fat Bike season party back at Milwaukee Brewing Company. A few other riders turned back with her after assessing the group’s rolling speed, distance remaining and the Belgian weather. The rest of the peloton continued south with the Wheel & Sprocket Circus Truck following to provide ride support and serve as possible sag wagon. 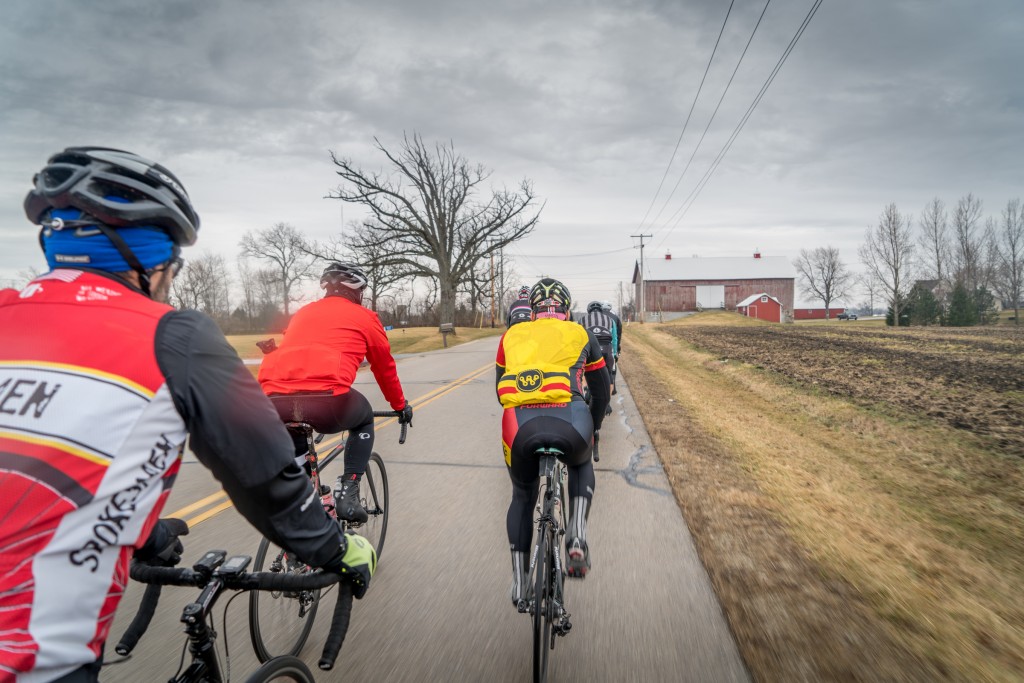 I saw this faded red barn in 2012 on the first ride to Paris, but the sky was blue!

The sprinkles began not long after we started rolling and stayed with us most of the way to Paris. After the obligatory group photo outside the Town of Paris Safety Building (the route missed the cemetery this year), we took a look at the weather radar on our phones. The heavier rain was all to the east of us along the lake, exactly where we were headed as our planned route took us into Kenosha for a pit stop at Public Craft Brewing.

So I asked everyone if they wanted to soldier on into the storm and follow the planned route or take a short-cut back the way we came and avoid the worst of the weather. I’m not sure if I was happy or disappointed when the majority voted to strike out for Kenosha. OK then, we’re going to get (more) wet! A few said thank you, but no thank you, and said their goodbyes in Paris.

Paris We made it!

The rest of us turned our handlebars into the wind and headed toward the lake with the promise of a tasty beverage and welcome, but short, shelter from the rain. The wind was right in our faces, the road spray in our eyes and the winter’s salty grit in our teeth as the smiling group pushed the pedals onward. 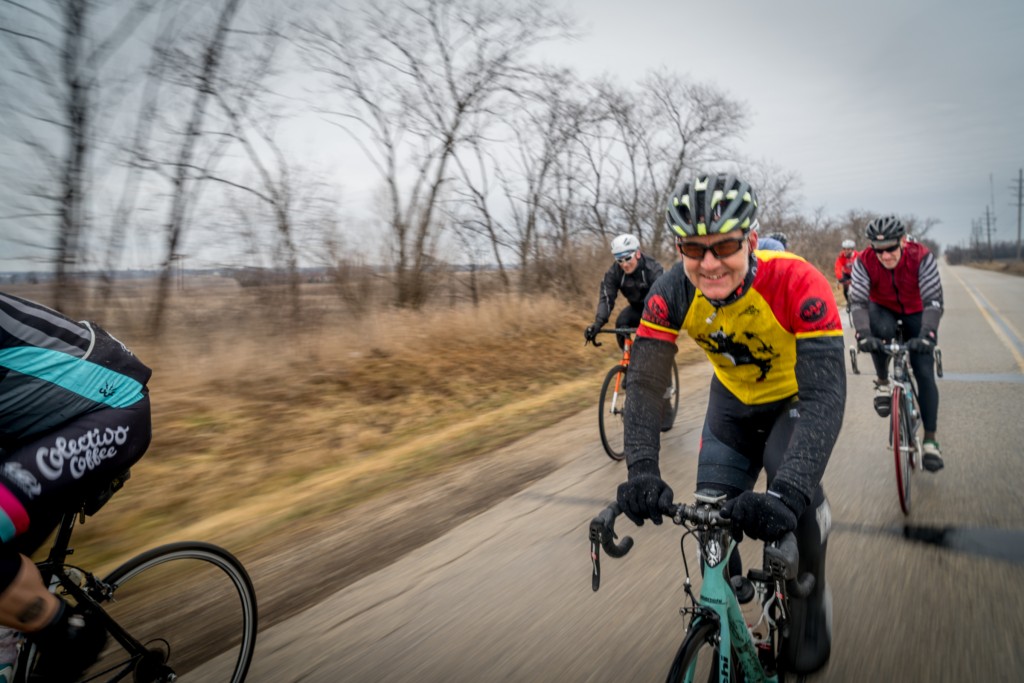 We arrived in Kenosha and promptly raised the humidity level inside Public Craft Brewing with our cumulative dampness. The brewers didn’t seem to mind as they poured beers and root beer, served up pretzels and cheese and cut Landjägers from their hanger. Energy bars were consumed alongside Belgian Doubles, shuffleboard was played, glasses were emptied and 30 minutes later we were back battling the wind and rain, finally headed northward. 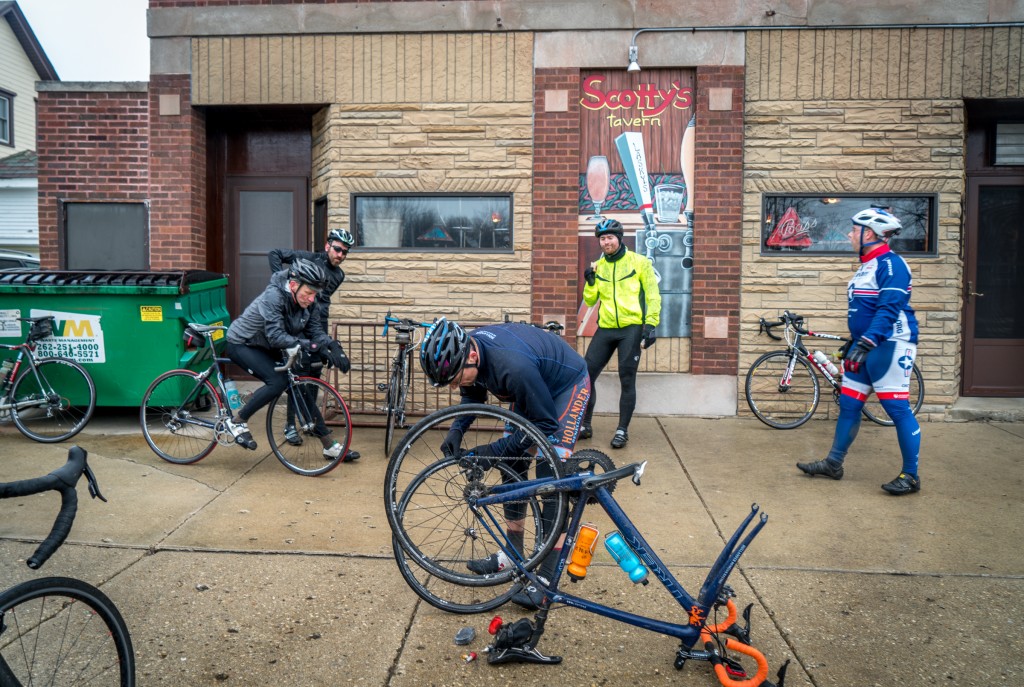 Lucky Scotty’s wasn’t open yet or this crew might not have made it to Public House Brewing.

Our legs were beginning to feel the miles as some in the group found themselves slipping off the back. The leaders slowed to let the more-tired catch back up as the group accordioned its way back home. Towards the end of the ride, a few riders availed themselves of the sag wagon so as not to force everyone to slow to their pace, but for the most part the ride finished as a group. 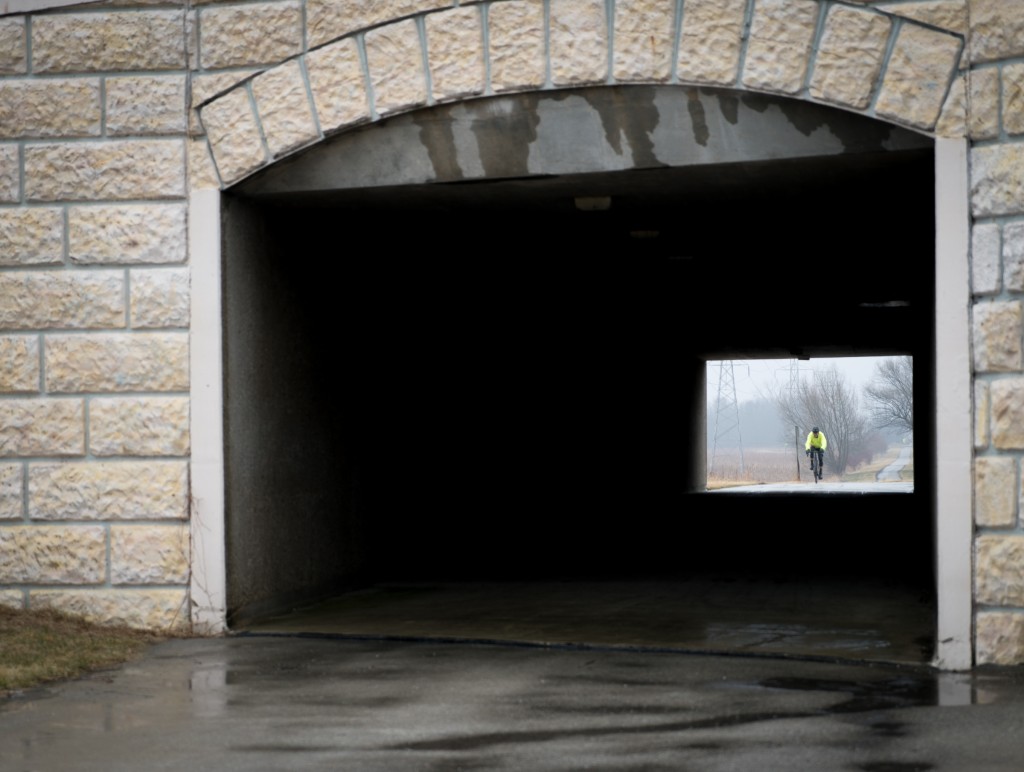 What lessons were learned for future Spring Classic Rides?

Thanks to everyone who participated on the first Spring Classic of the year, and a huge thanks to Amelia and Nick from Wheel & Sprocket for all the support!

3 thoughts on “Bike Czar: How We Bicycled to Paris”