By Matthew Wisla, Milwaukee Neighborhood News Service - Mar 23rd, 2016 10:35 am
Get a daily rundown of the top stories on Urban Milwaukee 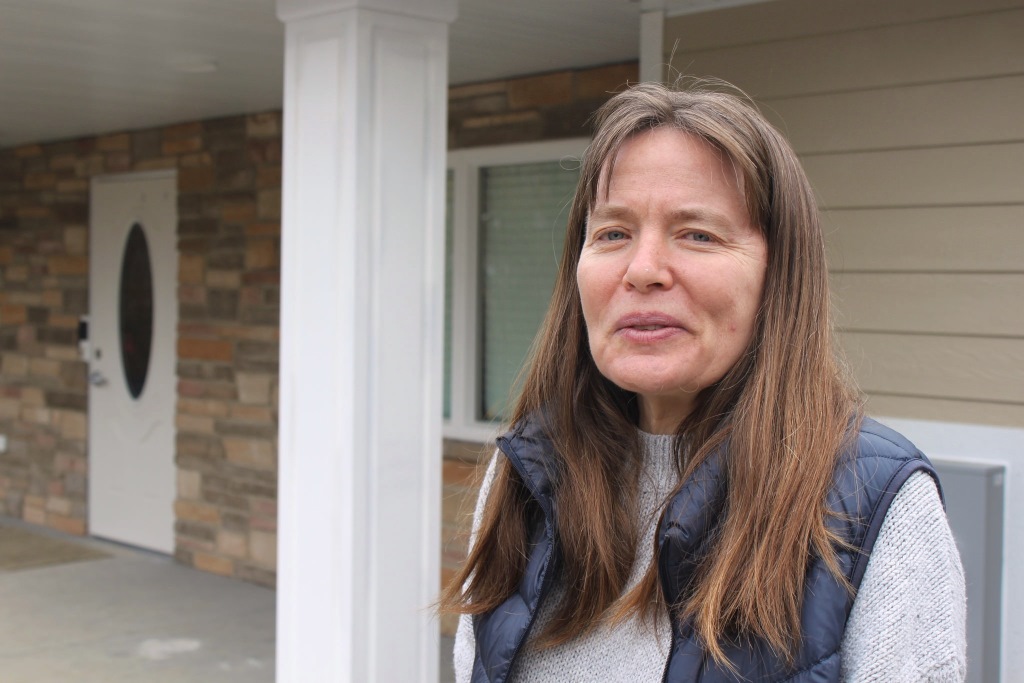 Debbie Davis lives near a new residence for people living with mental illness and believes that interaction between residents and community members reduces stigma. Photo by Matthew Wisla.

People living with a mental health condition also endure the social stigma that accompanies their diagnosis. As Brenda Wesley knows, stigma is a silent stalker that threatens to poison virtually every relationship and encounter with family, friends and co-workers.

“Who wants to be known as crazy, or as a nut, a lunatic or a loon,” she asked, her voice rising, but tempered with resignation. Wesley’s understanding of mental illness comes as a mother living with a son diagnosed with schizophrenia. She is also a member of the Milwaukee County Mental Health Board and the director of education and outreach for the National Alliance on Mental Illness (NAMI) of Greater Milwaukee.

Having a mental illness often means being labeled with your affliction, in addition to suffering from it. “People say you’re a schizophrenic or you’re depressed instead of saying you’ve been diagnosed with depression or are living with schizophrenia,” Wesley observed.

Fighting against stigma is part of Wesley’s daily life. “You have to look at the stigma of mental illness if you ever want to help people living with mental health conditions,” Wesley said. 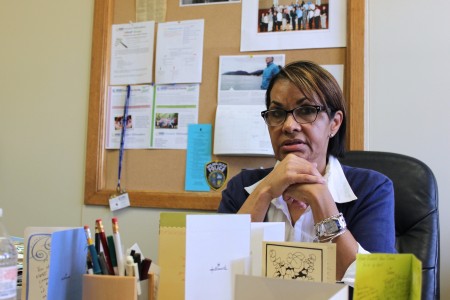 Brenda Wesley’s son was diagnosed with schizophrenia. She also is a member of the Milwaukee County Mental Health Board. Photo by Matthew Wisla.

Stigma has always been a problem for those diagnosed with mental illnesses. However, it is becoming a more widespread concern in Milwaukee as the county transforms its service model from delivering mental healthcare in a sprawling, centralized hospital complex to a decentralized system focused on numerous community-based facilities. According to Héctor Colón, director of the Department of Health and Human Services for Milwaukee County, the county plans to be “out of the inpatient business by 2018.”

Experts say placing mental healthcare resources in communities increases efficiency, as well as quality of care and quality of life for patients. Already the county has spent more than $15 million decentralizing mental healthcare delivery through increased collaboration between the county and other organizations, including the private healthcare system, the state, small providers, nonprofits and city residents, Colón has said.

The stigma against mental illness is strong even though it is more prevalent than most people might expect. “Research shows that people would rather spend a night in jail than admit to having a mental illness,” said Peter Hoeffel, executive director of NAMI Greater Milwaukee. “The number one reason people don’t seek help (for mental illness) is they don’t want to be treated differently. Stigma has that kind of isolating effect.”

Yet statistics show that between 20-25 percent of people will experience a serious mental illness in their lifetime, such as depression, conditions associated with drug or alcohol use, or an anxiety-related disorder. And, at any given time, about 15 percent of the population is suffering from a form of mental illness, including serious illnesses such as bipolar disorder, severe depression, schizophrenia and some personality disorders.

The poverty and violence that are part of everyday life in many central city neighborhoods can cause or exacerbate certain mental illnesses, resulting in stigma, according to experts such as Sue McKenzie, co-leader of The Wisconsin Initiative for Stigma Elimination (WISE) and program director of Rogers InHealth, a unit of Rogers Behavioral Health System focusing on mental health recovery.

“When kids — and adults too — come from a place of trauma and violence, it brings with it the increased likelihood of stress-related mental illnesses like PTSD (post-traumatic stress disorder),” McKenzie said.

She said teachers can stigmatize children as angry or habitual misbehavers, not realizing they may be reacting to a traumatic event they experienced or witnessed. “The teacher tries classroom strategies as though the child’s brain can focus normally,” McKenzie said. “Or they push kids away that they don’t understand.”

Wesley said it’s all too easy to label central city youths without questioning the root causes of their behavior. “Everyone just shrugs and says, ‘There goes another angry black boy,’” she observed. “The reality is inner city kids deal with all the mental health issues adults deal with.”

To help address stigma and other issues surrounding mental health in central city children, WISE is training a group of 12 African-American fathers as “peer specialists” who will coordinate with parents, public school counselors and teachers. They will be on call to help sort out the reasons why a child may be acting out or not making progress in school and recommend mental health or other resources. The initiative is planned to launch in April.

“Many people in the African-American community don’t trust doctors or other professionals so it’s going to be great to have a father from their neighborhood to talk to,” McKenzie said. “I’ve talked to many parents struggling to figure out what’s wrong with their son, and the last thing they say an African-American boy needs is another label for why we don’t expect the best from him.”

The program is designed to cut through stigma and other barriers by encouraging conversations between adults who trust each other about what may be troubling a child and discussing ideas and potential resources that could help, McKenzie said.

Addressing stigma requires culturally specific strategies. “How it looks in any one place depends a lot on culture and community. Stigma is an issue of social construction,” said Dr. Patrick Corrigan, a leading stigma researcher at the Illinois Institute of Technology. “So if you’re developing a new program for city residents you should be sure to have African-Americans driving it.”

Corrigan also points to the media’s role in spreading stigma throughout society. “The vast majority of people with mental illness on TV or other media are depicted as dangerous, but actually the average person with mental illness is no more likely to be violent than the rest of the population,” he said.

Debbie Davis has witnessed how fear affects communities. Her mother, 79, suffers from dementia and lives south of Milwaukee near a new facility that’s being built as a residence for people with mental illness on South 92nd Street. The facility will be home to up to eight people when it opens in April and is part of the county’s efforts to overhaul the mental healthcare system. Davis attended community meetings and an open house where residents from the neighborhood spoke openly about living in a neighborhood that includes a mental healthcare facility.

“In meetings, sometimes the loudest voices in the room are the most fearful,” Davis said. “But during the open house other people also talked about extended family members who were dealing with mental health issues.”

Recognizing mental illnesses as treatable conditions that can strike anyone, and that people suffering from them aren’t at fault for their illness are among the first steps to combating stigma, according to experts.

Meeting people who have been diagnosed with a mental illness and seeing them as living with an ailment like any other helps overcome stigma, according to a growing body of research, some done in Milwaukee. This has been shown to have longer lasting effects against stigma than an information session or lecture by a clinician or other expert.

Stigma often leads to blaming or shunning the person who is ill. “Some call it the ‘no casserole’ disease,” according to Hoeffel, because people recuperating following a stay in a mental health facility are often ignored by people close to them. It’s just the opposite of those returning home from a hospital stay for appendicitis, or a similar ailment, whose family and friends are eager to care for and cook for them.

As Wesley emphatically pointed out, “It’s a brain disorder, not a character issue.”

According to Corrigan, the Department of Veterans Affairs is launching a nationwide program featuring veterans discussing their mental health challenges in small community settings. In Milwaukee, NAMI and WISE regularly schedule storytelling sessions, discussions and plays where people with mental illness interact with members of the community, including educators and school children.

“Meeting someone with mental illness means getting to know them, and that’s how stereotypes begin to change.” McKenzie said.

Davis agrees. “What’s needed is more exposure to people in (neighborhood) facilities so everyone can identify with them as people and not with their illnesses.”

Back in the News: More Budget Cuts for Journal Sentinel? by Bruce Murphy