By Tamarine Cornelius, Wisconsin Budget Project - Mar 3rd, 2016 10:30 am
Get a daily rundown of the top stories on Urban Milwaukee 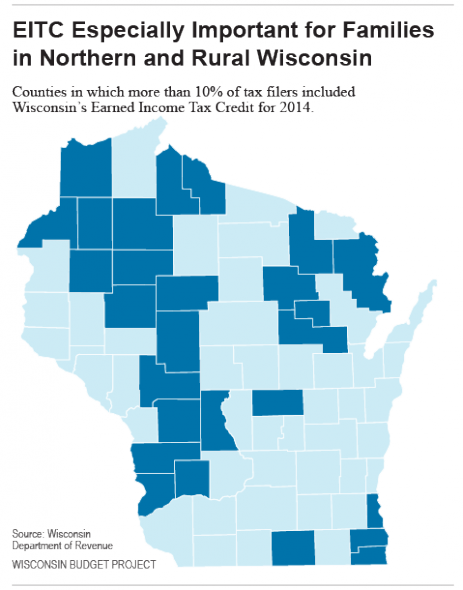 EITC Especially Important for Families in Northern and Rural Wisconsin

The Earned Income Tax Credit helps working families all across the state, and gives an especially large boost to families in northern and rural Wisconsin, according to recently-released information from the state’s Department of Revenue.

The EITC is a tax credit that benefits working parents who are struggling to make ends meet. Receiving the credit is associated with a whole host of positive outcomes for children and families, including helping children do better in school, raising college attendance rates, and improving the health of family members.

The number of families in Wisconsin that are strengthened by the EITC is substantial. In 2014, 253,000 of the total 2.9 million tax returns filed in Wisconsin included the EITC. That translates to 753,000 people in Wisconsin living in families that received the EITC. Those families received $99.6 million in EITC credits for 2014 – money they could use to make investments that help them keep working and improve the economic security of their family, such as paying for car repairs or saving for their children’s college educations.

The average credit amount in 2014 was $394 per tax return.That’s down 22 percent from the $502 average in 2010, after taking inflation into account. That decline stems from the fact that Gov. Scott Walker and state lawmakers cut the EITC in 2011, decreasing the credit amounts for working families with more than one child. That cut increased the amount of taxes that working families with low incomes are paying.

Counties with the highest share of tax returns claiming the EITC are shown below. Except for Milwaukee County, the other counties in which tax filers are the most likely to claim the EITC are all located in northern Wisconsin:

The EITC plays an important role in helping many working families make ends meet, and is an especially important support for families in northern Wisconsin. We should protect this important tax credit and make sure it can continue to help strengthen Wisconsin families.

The KIDS COUNT Data Center includes information on the share of population benefitting from the EITC in each county for past years.