Larson says it must be saved; reconstruction cost estimated at $60-$71 million.

By Edgar Mendez and Wyatt Massey, Milwaukee Neighborhood News Service - Feb 26th, 2016 10:43 am
Get a daily rundown of the top stories on Urban Milwaukee 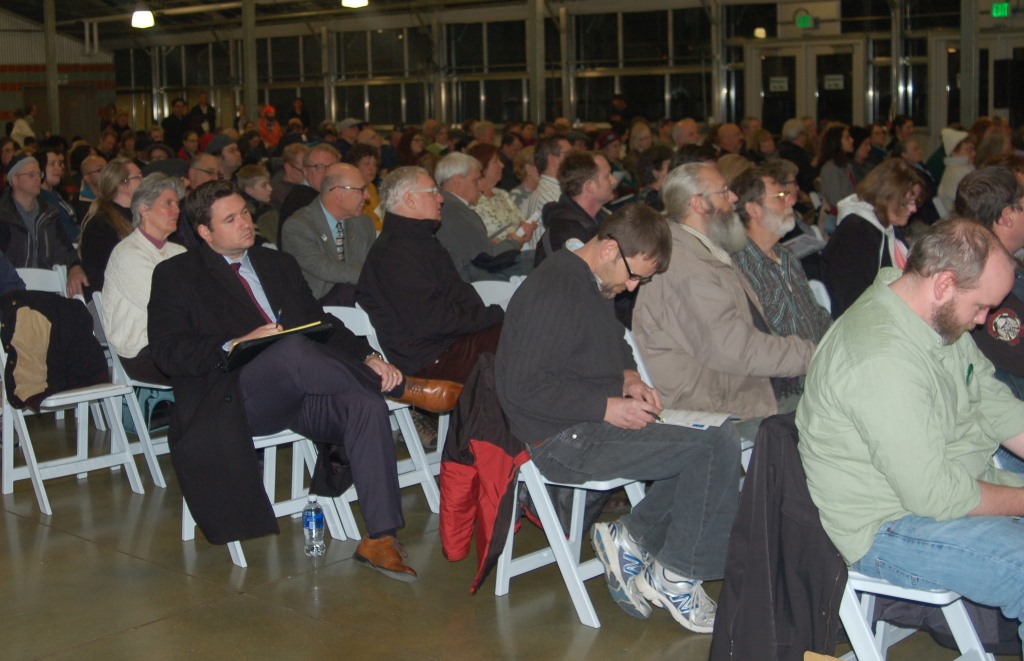 Hundreds of concerned residents attended Wednesday night’s public hearing on the future of the Domes. Photo by Edgar Mendez.

In a strong show of support, hundreds of community members streamed into the annex greenhouse of the Mitchell Park Conservatory Wednesday night to express their desire to save the Domes during a public hearing to discuss the future of the Clarke Square icon.

Among them was Roger Krawiecki, president of Friends of the Domes, who called the Domes “Milwaukee’s living landmark.”

“The Domes is a magical place for a lot of people; Milwaukee needs the Domes,” said Krawiecki, who has lived on South Layton Boulevard in Clarke Square for 27 years.

First opened in 1965, the Domes have been closed to the public since Feb. 6, when a piece of fallen concrete was discovered in the arid dome. Estimates to safely reopen the Domes are about $1 million; the county has already allocated $500,000 to repair the show dome, according to Milwaukee County Executive Chris Abele. Abele has asked the County Board to authorize an additional $500,000 for short-term repairs on the other two domes. The show dome is slated to reopen May 1. 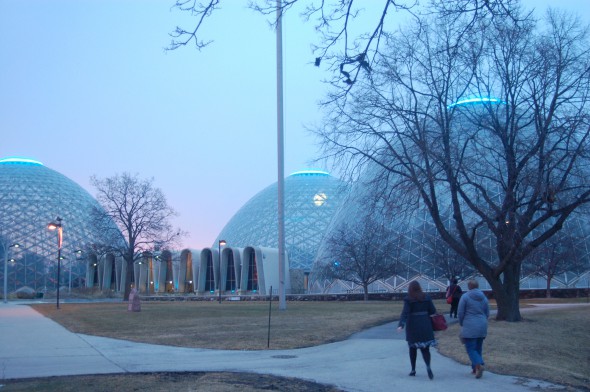 The Mitchell Park Conservatory Domes have been closed since Feb. 6. Photo by Edgar Mendez.

Less certain is the long-term plan for the Domes, which could cost up to $75 million to reconstruct, according to an independent engineering study. During the hearing, Milwaukee County Parks Director John Dargle estimated the project’s cost at between $60 million and $71 million.

During the hearing, Board Chairman Theodore Lipscomb chastised Abele for not being in attendance. Abele released a statement on Tuesday, saying that he would not be able to attend the hearing due to a prior commitment. His opponent in the race for county executive, State Sen. Chris Larson, spoke in favor of preserving the Domes.

“If elected leaders can afford to spend millions on an arena for out-of-state billionaires, we can afford to preserve and protect cultural institutions important to our community,” Larson told the overflow crowd.

Ian Bautista, executive director of the Clarke Square Neighborhood Initiative, said the hearing was an important first step in engaging the community to help determine the future of the Domes.

“The people in this community and others want their decision-makers to take action to preserve the Domes,” Bautista said.

As of last August, the Domes were on pace to welcome more than 238,000 visitors, the highest total in the last four years. Yet, increases in attendance have not offset growing annual expenses.

The Domes posted a net loss of at least $600,000 every year between 2006 and 2014, according to records obtained from the Milwaukee County Parks department. During that period, expenses totaled $14.8 million, while total revenue was $6.6 million.

Dargle warned those in attendance that the $500,000 estimate for repairs needed to reopen the park might be low. Dargle plans to submit a proposal for additional funding during the March 8 meeting of the Milwaukee County parks committee meeting. He said that additional funding would allow the county to take immediate steps needed to reopen the arid and tropical domes, as well as to begin work on a long-term plan.

Those plans can’t come soon enough for Vi Hawkins, who lives on Milwaukee’s North Side. She has been coming to the Domes with her family since the 1960s. Hawkins asked board members to do whatever it takes to save the structures.

“Please come together to make this happen; we need to maintain these buildings.”