By Jon Peacock, Wisconsin Budget Project - Feb 25th, 2016 11:45 am
Get a daily rundown of the top stories on Urban Milwaukee 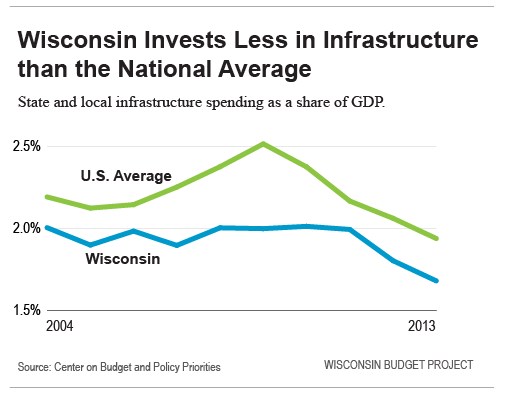 Wisconsin Invests Less in Infrastructure than the National Average

State and local governments have been neglecting to make investments in infrastructure according to a new analysis issued this week. The new study found that state and local spending on infrastructure, such as transportation, public buildings, and water systems, fell to a 30-year low in 2014, when measured relative to gross domestic product (see Figure 1). The drop-off since 2000 has been especially pronounced in Wisconsin.

Since the early 2000s, the decline has been very sharp. According to the new report from the Center on Budget and Policy Priorities:

As the following bar graph from the report shows, Wisconsin had the 7th largest decline in infrastructure spending from 2002 to 2013 (measured as the percentage point change in the share of GDP).

Wisconsin’s Decline in Infrastructure Spending is Among the Largest

Our own analysis of the CBPP data found that the drop in Wisconsin from 2002 to 2013 was 31%, compared to 17% nationally. Wisconsin’s rank in percentage of GDP spent at the state and local level for infrastructure dropped from 20th in 2000 to 41st in 2013.

The CBPP reports lays out a strong case for investing in infrastructure now:

“Reversing the decline in state investment in transportation, public buildings, water treatment systems, and other forms of vital infrastructure is key to creating good jobs and promoting full economic recovery — and this is an especially good time for states to do it.

I agree with those arguments and others made in the report, and I hope Walker administration officials and state legislators will seriously consider the report as they develop the next state budget bill. However, tax cuts made over the last several years and the long freeze of the gas tax complicate the task of balancing infrastructure needs and other pressing state and local needs, such as investing in K-12 and higher education. The report touches on that general problem and makes the case that some states should consider taking advantage of the very low interest rates now – in order to use bonding for increased capital investments. In addition, the report adds:

“In many states revenues still aren’t sufficient to adequately cover the costs of needed services such as education and health care, and still make the necessary infrastructure investments. These states will need to consider tax increases to preserve public capital that is crucial to long-term economic growth while meeting other needs.”

Wisconsin is probably one of those states that will need to increases taxes — at least to make some overdue investments in our transportation infrastructure. But it isn’t transportation alone where infrastructure investments are needed. Wisconsin school districts need to replace aging buildings, and anyone who has been following the news from Flint Michigan should be aware of how important it is to invest in and maintain quality public water systems.