9 of 11 districts in state with school spending referendums passed them in Tuesday election.

By Tamarine Cornelius, Wisconsin Budget Project - Feb 18th, 2016 10:46 am
Get a daily rundown of the top stories on Urban Milwaukee 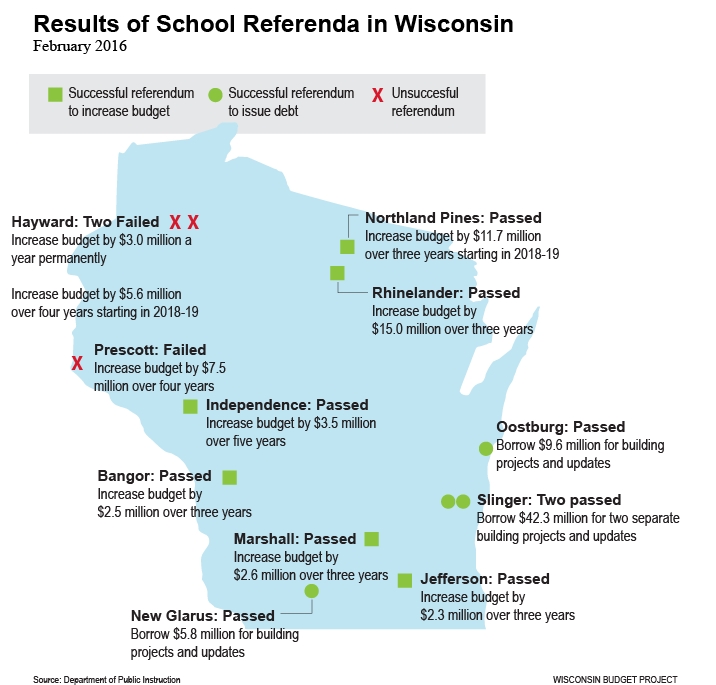 Results of School Referenda in Wisconsin

On Tuesday, Wisconsin voters approved initiatives in nine out of 11 school districts with referenda on the ballot, voluntarily raising property taxes in order to fund academics and other programs or improve infrastructure in their districts.

Voters also turned down referenda in two districts on Tuesday.

The total number of school referenda was 13. (Two districts had more than one referendum on the ballot.) Of the 13 referenda, 10 passed, for a 77% success rate. The Wisconsin Department of Public Instruction website has more information on school referenda.

Schools shouldn’t need to go to referendum to avoid making deep cuts to academic programs. Still, passing a referendum can be an important tool for taxpayers who want to ensure that their school district makes the kind of investments in students and schools that help build a strong economy.

This legislative session, some Wisconsin lawmakers sought to make it more difficult for voters to approve additional resources for children in public schools in their districts. They proposed requiring a two-year waiting period after an unsuccessful referendum before voters could get another chance to approve new resources. A later, amended version of the legislation shortened the waiting period to one year. As the state Assembly wraps up work this week, it looks like this bill (Assembly Bill 481/Senate Bill 355) won’t pass, meaning that residents can continue to use the referendum as a way to approve new resources for schools.