The Fire at East Pointe Commons

Weekend fire injures one, upsets many in 24-unit complex, but handled promptly. 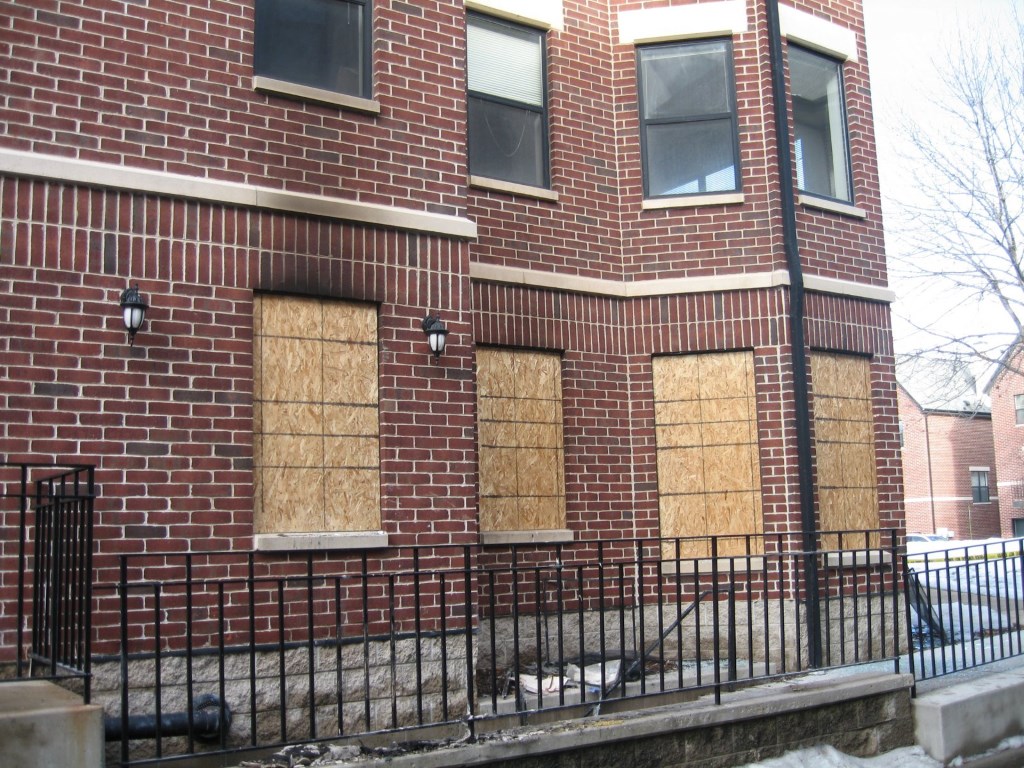 A male resident of a first floor apartment at the East Pointe Commons Apartments, 1420 N. Marshall St., was transported to Columbia St. Mary’s Hospital around 8:30 p.m. Friday January 29th, after a fire broke out in his unit.

I was in the immediate vicinity at the time, having just left the Metro Market on N. Van Buren St. when I noted sirens and flashing lights approaching. The Milwaukee Fire Department paramedic ambulances were among those responding to the alarm, along with fire trucks and support vehicles, like the Batallion Chief’s SUV. The tempo picked up and the sirens wailed. This was a fire in a 24-unit apartment building.

I reached the scene of the fire at E. Lyon St., and from behind the yellow tape I observed many of the vehicles I had witnessed speeding to the site some minutes before. Water was running down the northernmost slope of grand Yankee Hill, where the circa 1990 apartment project is located on the site of land once cleared for a never-built freeway. The fire was out, but so were the residents of the apartments. Out on the street on a winter’s night.

A fireman spoke to a woman with a child in her arms with considerable thoughtfulness that must have been a comfort to her at the time. His response did not get her back into her apartment any quicker, but she was assured that all efforts to do so were being undertaken. I was struck by the thought that just an hour earlier, none of the residents had been thinking, “where shall my child sleep tonight?”

Around the time of the fire, Robert B. Monnat, a partner and Chief Operating Officer of Mandel Group, the East Pointe Commons owner and property manager, was on his way home from a Bucks game. He emailed me his account:

“The MPD and MFD were all over it as soon as the smoke alarm set off, as was our property staff.  When I showed up at the scene after the Bucks game I was at, I found 6 Mandel associates on site helping residents. Great turnout for a Friday night.”

“As of yesterday the cause was under investigation. Initially I heard it may have been a kitchen fire. The fire occurred in a ground floor unit on the courtyard side at the south end of the building. The occupant, a senior citizen, was taken from the scene on a stretcher in serious condition but was stabilized at the hospital and is doing well. The damage was fairly extensive to the unit and affects the unit above it as well.”

By Saturday morning, when I visited the scene, much work had already been done. A hall door on the first floor, and corridor windows were open. The southeast first floor courtyard unit of the building, where the fire broke out, was boarded up against the elements. A truck from Magikist carpet experts was parked at the south side of the building. Another vehicle announced the presence of Sid Grinker, a restoration contractor and sort of first-responder for building emergencies.

Suspicions of a kitchen origin for the fire seemed well founded, as the fire fighters had hoisted a charred refrigerator and tossed it through the window of the burning apartment. It landed atop an ornate cushioned chair with red velvet upholstery and a pile of phone books and other debris.

The glass from the broken window remained on the ground. A broken handrailing led down to the lower level outside door, twisted and crushed by contact with the refrigerator. Char was everywhere.

Later that day, 22 of the 24 units were turned over to 30 residents, including the babes in arms, along with five dogs and one cat. The displaced residents and their pets had been assisted by volunteers from the American Red Cross. Barbara Behling of the Red Cross says it was her understanding that most of the residents were able to return to their homes that evening.

However, the organization is monitoring the condition of the hospitalized victim. It also paid for a hotel and other personal expenses for a resident upstairs who was displaced due to the fire. Behling says it is important that residents have a working smoke detector and an escape plan. The alarms were functioning in the building.

Monnat wrote: “Of the 24 units in the building 22 are occupiable and were turned back over to their residents the next day. Sid Grinker was on site to repair doors that were broken down by the FD and to make stabilizing/enclosure repairs at the affected unit.”

By Monday morning the site damage had been cleared. All broken glass had been removed, and a team of workers had managed to haul away the refrigerator, the old phone books with their charred advertisement for Gruber Law Offices, and the ornate red velvet upholstered chair.

Meanwhile, the investigation of the fire continues. Amanda Lanaghan, Records Custodian for the Milwaukee Fire Department says, “the incident report is not complete yet, but should be by the end of this week.” 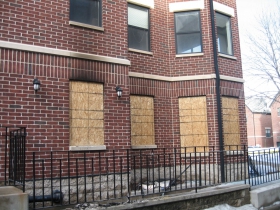 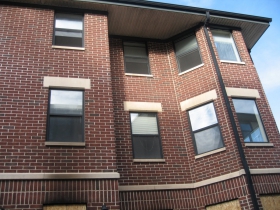 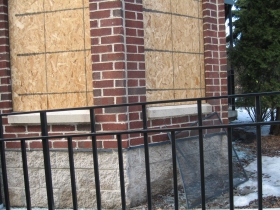 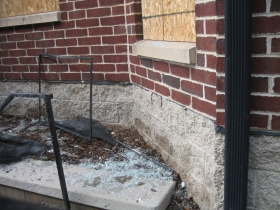 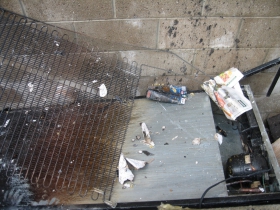 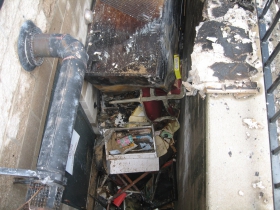 One thought on “Plenty of Horne: The Fire at East Pointe Commons”