His conservative policies were supposed to grow jobs. Did they? First in a series.

Numerous studies by political scientists find voters like their governors when the state economy is strong and blame them when the economy suffers. This is true even when the cause is clearly something beyond the governor’s control. During the Great Recession, for example, governors of states heavy in the then-booming oil production sector were far more popular than governors in Midwest states whose manufacturing had suffered from global competition.

By contrast, economists and other social scientists are far less likely to credit good or bad economic performance to the leader in charge at the time, whether presidents or governors.

The willingness to jump from correlation to causality also varies across the political spectrum. On the right, numerous think tanks attempt to prove a state’s prosperity is the result of following a particular conservative economic policy. The response by liberal think tanks is usually more modest, showing that the results are heavily dependent on the choice of time period or state. Liberals are typically reluctant to make the further step—to argue that if states with more liberal government do better on some economic measure then those policies must be the cause.

Arguably this more modest approach hurts liberals politically. Historically the US economy has done better on average with Democratic presidents on most measures than under Republicans. If the record were reversed, if the stock market, jobs and corporate profits grew more under Republicans, Republicans would surely trumpet this as the vindication of their policies.

When running for governor, Scott Walker–and his supporters–strongly argued the correlation proves causality position. Walker criticized Governor Jim Doyle for Wisconsin’s poor jobs performance and promised that if elected the state would produce 250,000 additional jobs in his first term. Instead Wisconsin added about half that number. Walker’s initial reaction was to demand that the federal government change its method of collecting employment data.

Walker entered office with the slogan “Wisconsin, open for business.” Early surveys of members of Wisconsin Manufacturers and Commerce showed a marked improvement in the perceived business climate. Whenever the Journal Sentinel reported on a business expansion, among the comments were several who invariably said, “Thank you, Governor Walker.” 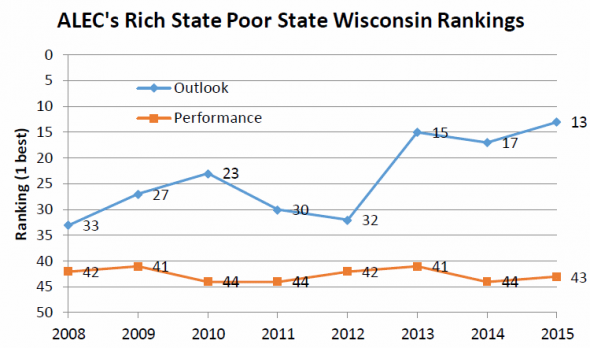 Many organizations on the right were enthusiastic about the changes in policy under Walker. The conservative American Legislative Exchange Council (ALEC) raised Wisconsin from 32nd place to 13th among the states on its “Outlook” scale, based on Walker’s policies, and the graph shows.

Unfortunately, Wisconsin’s actual performance did not match its enthusiastic reviews. Job growth came in at about half the promised numbers, well behind that of all its neighbors except for Illinois which is suffering from the worst-funded public pensions in the nation. Despite ALEC’s enthusiastic Outlook rating, Wisconsin remains mired near the bottom — anywhere from 41st to 44th place among the states — when it comes to the same group’s “Performance” rating

Despite Wisconsin’s poor job record, Walker was widely regarded as the front runner when he entered the presidential race. A column last May by Christian Schneider argued that poor Wisconsin outcomes would not hurt him:

Perhaps most important, Walker’s challengers won’t attack him on the Wisconsin economy because to do so would be to attack the efficacy of conservative policies in general. Walker is a down-the-line conservative; criticizing his governance would be to criticize exactly the kind of leadership Republican voters want to see in a candidate.

As Schneider makes clear, Walker’s economic plan is the orthodox Republican economic plan. It formed the underpinnings for Walker’s confidence that he could promise 250,000 new jobs. Versions of it are pushed by numerous organizations on the right, incorporating the assumption that prosperity comes from making the so-called “job creators” happy. Crucial elements include reducing taxes—particularly taxes on the wealthiest citizens—and the elimination of government regulations, including those aimed at protecting the environment and on financial operations. The plan is sold as the answer to job creation.

Wisconsin is, of course, only one state. What about other states that have adopted this plan? Every two years the Cato Institute issues its Fiscal Policy Report Card on American’s Governors. The latest came out in October 2014. This rating offers an opportunity to test how well the states praised by Cato—and those rated lowest—performed economically.

Cato awarded four governors an “A” and eight were graded “F.” For balance, I added the four “B”s with the highest scores to the “A”s. The chart below shares shows percentage job growth since January 2011 in the eight top-rated states, through November of 2015. 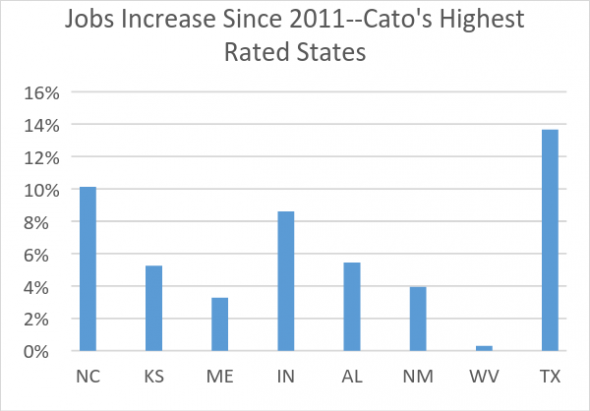 Walker barely missed inclusion on this list. He was downgraded for increasing spending.

The period shown corresponds to Walker’s first term as governor. It is a period of steady growth in jobs nationally as the US recovered from the Great Recession. It starts a year after jobs hit bottom.

One thing that stands out in this chart is the huge variation in results, from Texas’ healthy growth to almost no growth in West Virginia. It is possible to find individual reasons a particular state performed well or poorly: the travails of the coal industry for West Virginia and the benefits of a diversified economy and immigration for Texas. The problem is to find a common thread.

The next chart shows the jobs performance over the same period of the states whose governor were awarded “F”s. Despite the inclusion of Illinois, which suffers from having the nation’s worst-funded public pensions, this list includes many of the states with highest job growth. 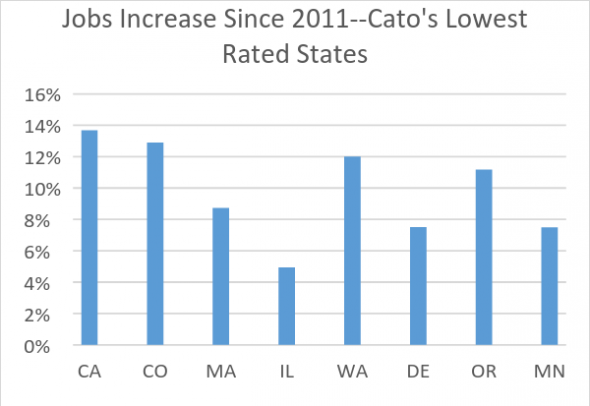 The eight states that Cato gave “F”s had a 9.8 percent growth in jobs. By contrast the eight with “A”s or the highest “B”s grew by just 6.3 percent. Does this mean that the standard conservative economic policy hurts a state’s prosperity? That is a question we’ll explore in a future column.

But for now one thing is clear: the assertion that conservative economic policies brings prosperity to a state is not supported by the evidence, either for Wisconsin or other states that have embraced such policies.