Are Democrats Better for the Economy?

The data shows Democratic presidents have better economic growth. But is the data meaningful?

The loudest portion of the Democratic base in Wisconsin betrays an underlying hostility to business and the market economy. Yet historically business has performed best when Democrats inhabit the White House. This is counter-intuitive since the Republican Party is considered the party of business. In Wisconsin most business political contributions go to Republicans.

In the chart to the right I track the percentage change in the stock market over four-year presidential terms between 1928 and the present (two and a half years for Obama’s second term). On average, the Dow Jones under Democratic presidents increased by 53 percent compared to 15 percent for Republicans.

Recently Princeton economists Alan Blinder and Mark Watson looked at economic performance over the post-war period. In Presidents and the Economy: A Forensic Investigation they conclude that,  “…the U.S. economy performs much better when a Democrat is president than when a Republican is.” Blinder and Watson looked at a number of measures, including: 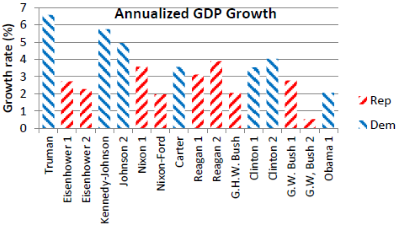 In their introduction, Blinder and Watkins summarize their findings:

The superiority of economic performance under Democrats rather than Republicans is nearly ubiquitous; it holds almost regardless of how you define success. By many measures, the performance gap is startlingly large–so large, in fact, that it strains credulity, given how little influence over the economy most economists (or the Constitution, for that matter) assign to the President of the United States.

One reason for skepticism about such results is that there are numerous examples of people identifying historical patterns that seem to predict future events, such as which stocks will rise in price, or who will win the World Series or the next election. Most such patterns lose their predictive power as soon as they are identified. (One of the more bizarre examples of this fallacy appeared just days before the 2012 election. A posting at the conservative Brietbart site argued that Romney would win because “Republicans have won every November 6th presidential election since 1860.” Needless to say that pattern didn’t hold.)

The reason that such patterns disappear on discovery is that the apparent relationship is fallacious. The mere existence of a pattern does not prove causality.

The Blinder and Watkins’ results are not a new discovery, nor is my analysis of stock prices. Numerous articles have been published, both scholarly and popular, discussing the partisan stock market phenomenon starting in the 1980s. The Blinder and Watkins study is only the latest in a long series finding a similar pattern. Rather than going away after being discovered, the relationship between the strength of the economy and the party of the President has grown stronger in recent years.

Critics of these results have tried a number of ways to make them disappear. One approach is to question the starting point. When does a new president’s influence start and that of his predecessor stop? For the stock market calculations, I used inauguration day as the divide. This choice is somewhat arbitrary. Since people buy and sell stocks based on anticipation about future prices, it could be argued that the transition comes at an earlier date–Election Day perhaps. Or perhaps the new president’s influence kicks in later as economic policies become clear. Practically speaking, a difference of a few months in either direction has little effect on the results.

Another tack taken by critics is that instead of presidents influencing the economy, the state of the economy influences who is elected. In this view, Democrats win when times are bad, so the stock market can only go up as the economy recovers, and Republicans are elected when everything seems rosy, so it can only worsen. But models developed by political scientists to predict election outcomes show that incumbents of either party are hurt by a bad economy.

Blinder and Watkins also look at economic policy and find it doesn’t do much to explain the difference:

They conclude that these “luck” factors explain only about half the difference:

These three “luck” factors together (oil, productivity, and ICE [a measure of consumer confidence]) explain 46-62% of the 1.80 percentage point D-R growth gap. The rest remains, for now, a mystery of the still mostly-unexplored continent. The word “research,” taken literally, means search again. We invite other researchers to do so.

Matthew Yglesias argued that even some of the things described as good luck could also be considered the result of better policy:

Democrats do a better job of managing foreign affairs, of instilling confidence that government is on the side of the middle class, and of promulgating federal regulations in the public interest.

These results should of course be treated with caution. The sample sizes are small—around twenty if each four year term is treated as a separate unit, more if smaller time units are used. The trouble with using historical data is that it is not possible to rewind history, change only the election results, and see if it comes out the same.

Even so, statistics can help us estimate how confident we should be in the results. Statistical calculations of differences are usually accompanied by what is called a “p-value.” The p-value is an estimate of the likelihood that the difference resulted from pure chance. As mentioned earlier, stock prices increased by 53 percent under Democratic presidents compared to 15 percent under Republicans. The p-value in this case was between 8 percent and 9 percent. In other words, the likelihood that a difference between Republicans and Democrats resulted from random variation is less than 10 percent.

One question that comes up after studies of this nature are issued is why the president’s party identification should have so much influence. Certainly administrations of each party have differed from the other in consistent ways.  Democratic presidents have been more supportive of measures that make the combination of revenues and expenditures more progressive, by means of the minimum wage, the tax code, and various programs targeting low-income people. Obamacare, for example, contains a number of provisions that have a redistributional effect, including a tax surcharge on high incomes, expansion of Medicaid, and tax credits tied to income.

By contrast, Republican administrations have been much more supportive of measures that redistribute income upwards, such as the Bush tax cuts or proposals to cut unemployment benefits or reduce food stamps. Particularly in recent years they have been devotees of “supply side” economic policies that advocate reducing the top tax rate. This philosophical difference is reflected at the state level, as in Walker’s push to reduce the state income tax, the most progressive of Wisconsin’s three major taxes.

A related question is why attempts to relate partisan control in Congress to economic outcomes have proven futile. Part of the answer may relate to the difference in the institutions. Presidents preside over the largest part of the government, appointing department heads and nominating members of independent bodies such as the Federal Reserve. Congress, by contrast, generally plays a more reactive role, lacking a single point person. Thus to the extent that the government has any strategy at all, that strategy is most likely to reflect the president’s goals.

A second part of the answer is that even if the partisan balance in Congress was as important as the president’s, the effect would be harder to measure. As a start, the number of variables needed doubles to include who controls both the House and the Senate. Next, the composition of the two Congressional delegations of today is quite different from of the 1930s and 1940s with the migration of southern conservative whites from Democratic to GOP. Historical data from before this transition may have little relationship to what happened since. Between the doubling of variables and the change in the Congressional delegations, a partisan economic effect, even if it exists, would be difficult to detect.

Blinder and Watkins comment on “how little influence over the economy most economists assign to the President of the United States.” Like the insistence by the Journal-Sentinel’s editorial board that Wisconsin’s state policies have little effect on the economy, this belief seems much more based on faith than evidence. In the case of the president’s influence on the economy, one can view the studies as evidence that the null hypothesis — that there is no difference — should be rejected.

My next column will look at possible explanations for the difference.

5 thoughts on “Data Wonk: Are Democrats Better for the Economy?”