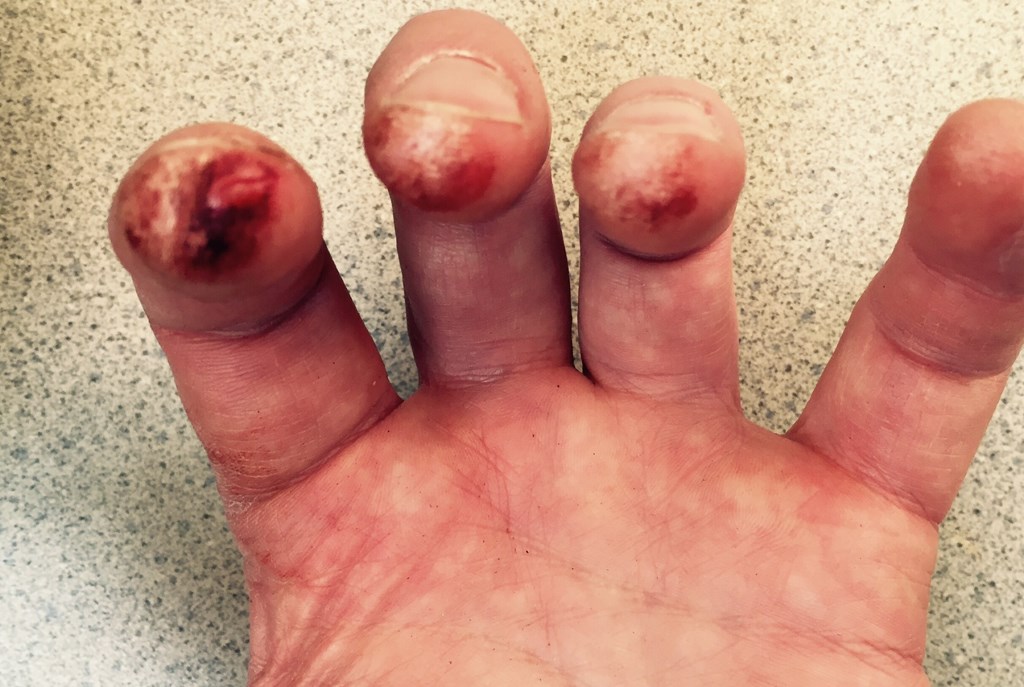 This was Frank Almond’s hand last night during the concert. Photo courtesy of Almond.

On Monday evening, violinist Frank Almond, pianist William Wolfram, and cellist David Requiro seized the stage at Wisconsin Lutheran College’s Schwan Hall and stunned the audience with breathtaking musical intensity, piteous beauty, and, just to show he was sincere about giving it his all, a generous portion of Almond’s own blood.

The Frankly Music series is, on the surface, an informal affair. Almond impishly offers program insights from the stage rather than providing formal notes in the published program book. This personal approach, although hardly illuminating to the most serious music history buffs, opens a window onto what to listen for and what Almond feels about the music he and his colleagues are about to perform. In the case of Monday’s Russian Masters program, his sly comedic banter and warnings of dark clouds on the horizon could hardly prepare the audience for the fierce energy that was on its way.

The concert opened with the Trio élégiaque No. 1 in G Minor by Sergei Rachmaninov. This trio is early Rachmaninov, but it displays his compositional mastery and delivers big-time dramatic payoff. Requiro and Almond began the piece with shimmering motion that set the atmosphere for Wolfram’s rhapsodic piano line. It is always a treat to hear Wolfram play. His soul bursts with deep musical knowledge, and with his powerful, athletic hands that could palm a whole set of encyclopedias, it is easy to focus one’s attention entirely on his artistry alone. Wolfram’s relationship with Almond has brought him here frequently, and both his chamber music performances and his solo appearances with the Milwaukee Symphony Orchestra are revelatory. Wolfram has a gift for finding the essence of a phrase’s shape within the musical architecture, and he leads his colleagues and listeners to elation. This is not to say it was all Wolfram. Episodic material in the violin and cello was exchanged with perfect subtlety, inflection, and warmth, and the passion of the work was beautifully delivered.

The highlight of the program, to this listener’s ears, was Sergei Prokofiev’s Sonata for Violin and Piano in F Minor, Op. 80. Prokofiev’s work is at times eerie, other times thuggish, and still other times magical. In the opening, Almond’s rapid violin scales haunted the atmosphere above brooding piano chords, creating, as Prokofiev himself suggested, the sound of “wind blowing through headstones.” In the second movement Almond suggested that along with intensity, we would hear a hint of Prokofiev’s playful side, and that is true if ruffians playing mumblety-peg with sharp knives falls into the playful category. The second movement has an air of hooliganism that is ominous, and Wolfram and Almond conspired to make the music appropriately threatening. Almond also promised music that was life changing. He delivered. The Andante was a waltzing lullaby filled with quintessential Prokofiev sweetness. Almond’s most admirable ability is his facility for playing tenderly, and here it conveyed an aching joy. The Prokofiev garnered appreciative and well-deserved applause as the return of that windy graveyard faded away like a sad dream.

After intermission, Almond brought up the nerdy debate between Prokofiev lovers and Shostakovich fans—a rivalry as real as Packers v. Bears or boxers v. briefs. I am pro Prokofiev, but Wolfram, Almond, and Requiro conspired to make a Shostakovich fan out of even the most trenchant naysayer with the Piano Trio No. 2, Op. 67. Almond, in particular, left it all out on the stage, literally bleeding for his art (hours of practice, bitter winter cold, and strings like garrotes will split fingertips wide open), as our photos prove. Requiro’s harmonics in the opening bars were mesmerizing, and the trio delved into the sounds of desolation, despair, and suffering (both physical and emotional) without abandoning the exhausted glimmers of hope that Shostakovich offered in the final bars.

It is rare that a whole program has such a heart-rending impact, but this was one for the books.

One thought on “Classical: A Bloody Good Show”