Another general environmental claim is that removal of the Estabrook Dam will result in more favorable (i.e., “fish friendly”) conditions in terms of water temperature and oxygen levels. The interplay between channel geometry, water velocity, water depth, water temperature, photosynthetic activity, and oxygen levels is quite complex. Although I would anticipate that on balance there would be some net improvement in water quality if the dam is removed, there is no guarantee this will occur. For most dam removal projects, the river establishes a channel that is significantly narrower than the impoundment, helping somewhat to maintain water depths and to alleviate the effects of heating on what is typically a much shallower body of water. This typical change in channel morphology is demonstrated in before and after photos presented below of the impoundment for the Campbellsport Millpond Dam which was removed in 2011. But as is evident to anyone commuting south on I-43 over the past seven years and observing the Milwaukee River while passing Hampton Avenue, this type of narrowing of the channel has generally not occurred in the impoundment for the Estabrook Dam since the gates were opened in 2008. The channel in many locations is nearly the same width as the impoundment was when the gates were closed.  Even with higher flow rates, the much shallower water depths (in particular, during summer months and periods of extreme low flow) that occur without the dam present the possibility that equal or greater temperature extremes could actually occur within this section of the Milwaukee River. In short, a repaired dam might actually realize less temperature extremes in the water.

Before and after photos of the Milwaukee River upstream from the Campbellsport Millpond Dam show the dramatic narrowing of the river channel after removal of the dam in 2011.

A case study presented as Chapter 8 in Dam Removal Research: Study and Prospects on the Good Hope Mill Dam on Conodoguinet Creek in Cumberland County, Pennsylvania, included data from continuous monitoring (at 15-minute intervals) for dissolved oxygen, temperature, pH, and specific conductance (or ability to flow) performed over a six month period extending before and after removal of the dam. Following removal of the dam, the study reported no change in the magnitude of the daily extremes for these water quality parameters –  only a shift in the timing for when the extremes occurred. The mean annual flow rate for this river of 619 cfs is exactly equal to the mean summer flow calculated for 2008-14 for the Milwaukee River. The conditions observed at the Good Hope Mill Dam may not be typical, but clearly contradict the presumption that improvements in key water quality parameters will result from removal of the Estabrook Dam.

Attributing improvements in fish habitat to dam removal (beyond those that would result from repair of the dam in conjunction with construction of a fish passage) also appears to be a general assumption not supported by actual data. No surveys of fish populations appear to have been completed for this segment of the Milwaukee River since the gates were opened in 2008. However, several detailed fish surveys were completed by WDNR during 1996 through 2001 that included not only the impoundment but other nearby sections of the Milwaukee River. Some of the data from these surveys is summarized below.

Different methods were reportedly used by WDNR for the surveys completed in different segments of the river. In addition, there were significant variations in the results from one year to the next at several locations. Therefore, it is difficult to draw conclusions from the data for the two survey locations that were sampled only on two years, including the Estabrook Dam impoundment. All of the surveys were performed following opening of the North Avenue Dam, but before the 2008 order to leave the gates open for Estabrook Dam.

One of the findings of the WDNR study that somewhat surprised me was that index of biotic integrity (a measure of ecological health) was characterized as excellent for both the section of the Milwaukee River in Kletzsch Park that is immediately upstream from the Estabrook Dam impoundment, and the section near Capitol Dr. that lies approximately one-half mile downstream of the impoundment. Thirty-two species of fish were observed in the Kletzsch Park segment of the River in 1996-2001. While the Estabrook Dam impoundment contained lesser numbers of fish and fish species, on several measures, it appeared to be comparable to the free-flowing segment of the Milwaukee River near Brown Deer Road.  Although the highest percentage of carp (7.1 percent of the total fish surveyed) was reported for the Estabrook Dam segment of the River, all of the carp were observed during 2000 with none reported in a subsequent survey in 2001.   Whereas carp are regarded as a fish species indicative of degraded habitat and lower water quality, the Estabrook Dam impoundment was also noteworthy in containing the second highest percentage population of Greater Redhorse, a state-listed threatened warm-water fish species that the environmental assessment considered to be “intolerant of degraded habitat.”

While it is possible that fish habitat and populations would improve with permanent removal of the dam, there are anecdotal reports from riverfront property owners (at least two of whom are members of the Milwaukee River Preservation Association, which favors the dam) as well as from Milwaukee Riverkeeper that fishing has decreased in quality within the former impoundment area since the gates were opened in 2008.  Improvements in fish habitat and recreational fishing are one of the most important benefits cited in the EA and by Riverkeeper as a benefit from removing the dam, but the previous survey data as well as the anecdotal reports suggest these improvements may be limited, and almost certainly not analogous to improvements that occurred following removal of the North Avenue Dam.

In conclusion, many of the most important environmental benefits  anticipated from dam removal appear to have limited supporting evidence. There is a possibility that no significant environmental benefits would result from removal of the dam beyond those which might occur with repair of the dam in conjunction with construction of a fish passage and implementation of improved operating protocols for the seasonal and other drawdowns.  The possibility exists that in the short term (as the river reaches some type of equilibrium with maturing vegetation on 30 acres of former impoundment) that sedimentation issues might be exacerbated with removal of the dam. Temperature extremes could also be exacerbated during summer months if the dam is removed, due to the very shallow water depths that may develop. Whereas only eight species of fish were recorded in the North Avenue Dam impoundment prior to removal of the dam, at least 24 species of fish were present in the Estabrook Dam impoundment in 2000-01, seven or more years before the opening of the gates in 2008. The sections of the river immediately upstream and one-half mile downstream of the Estabrook Dam impoundment were rated as excellent long before the 2008 WDNR order to open the gates. Using the changes that occurred following the North Avenue Dam as an analogy for improvements that would occur in this segment of the river is probably unrealistic and inappropriate. 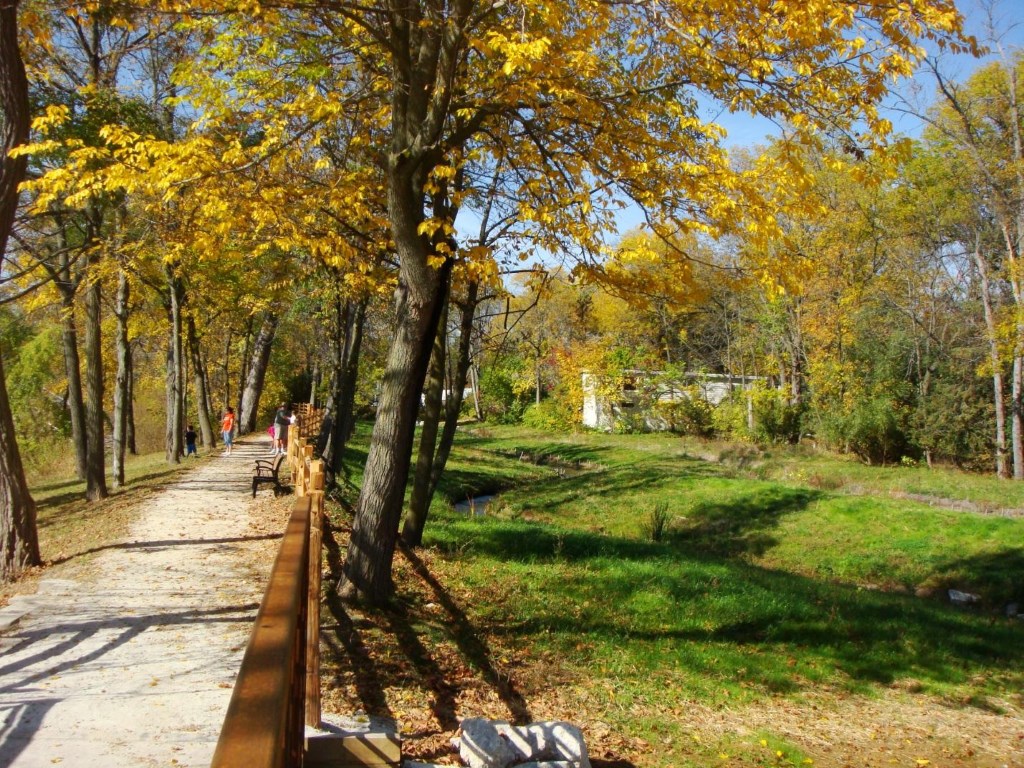 View of the fish passage and enhanced trail constructed at the Mequon-Thiensville Dam in 2009-10. 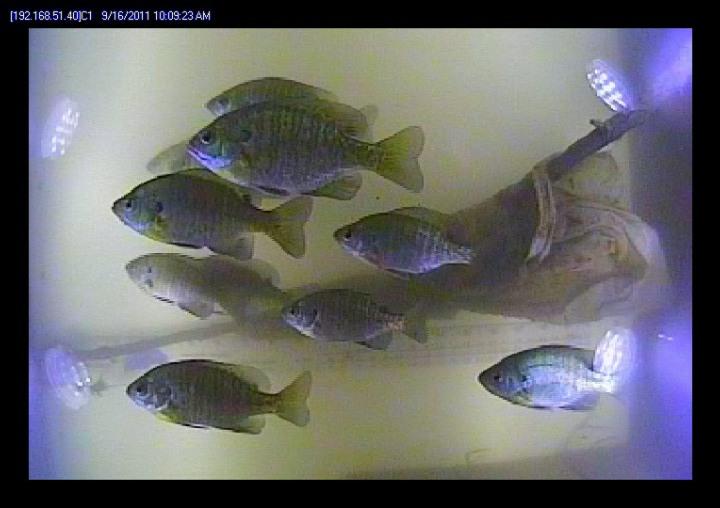 Photograph of fish passing through the fish passage at the Mequon-Thiensville Dam. As of June 2015, a total of 35-species of fish have been recorded by a “fishcam” in the act of swimming past the dam [http://www.co.ozaukee.wi.us/1248/Fishway-Camera]).