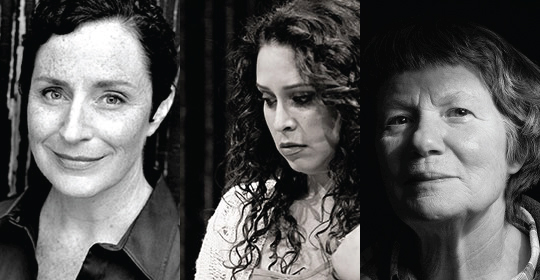 In Agnes of God, a court-appointed psychiatrist  is sent to evaluate Sister Agnes, a young nun whose infant has been found strangled.

Agnes’ explanation is based on a tried-and-true Christian tenet—it was a virgin birth.

The play, which ran on Broadway in 1982 and then became a film in 1985, raises as many questions as answers. Renaissance Theaterworks, which is staging the play (it opens January 22), will be wrestling with those questions, led by director Suzan Fete a company co-founder with more than 20 years of experience as an actor, director and producer in professional theater.

Sister Agnes is accused of the murder of the infant but insists she has no memory of the conception or birth. She’s either telling the truth or she’s off her rocker.

“I wouldn’t say Agnes is broken,” Fete says.  “I would characterize her as very special and fragile person with amazing gifts. She sings like an angel and has an unshakable faith in God.”

But that faith doesn’t necessarily jibe with the facts. It has been argued the play, at its core, wrestles with logic and fact. But Fete doesn’t agree.

“I feel the play touches on the intense longing felt by many (or most) humans to believe in something bigger than ourselves and the idea that even the best-intentioned love can blind us.”

While selecting a cast for this show, Fete says she looked for talent, passion and truthfulness. “Those are the same things I look for whenever I cast a show,” she says. “And I am over the moon with my truly terrific cast — none of whom I have worked with before as a director.”

Fete is referring to Rana Roman (Agnes) Flora Coker (the protective Mother Superior) and Laura Gordon (the psychiatrist who must determine if Agnes if fit to stand trial). Roman is a singer-actress who was with the touring production of Rent, Coker acted for years with Theatre X and with other theaters, and Gordon has been a stalwart actress with the Milwaukee Rep for decades. “I’m working with an absolute Dream Team,” Fete says.

“My guess would be that Ms. Bancroft is referring to the play’s essential and fascinating questions about God and faith,” Fete says. “These questions can lead to interesting self-reflection and discussion.”

The play is a natural for a company that emphasizes writing and acting by women. Fete says the drama is as effective and powerful today as it was then.

“The idea that people can be blind to their own bias and that implicit bias can impact any one’s ability to behave objectively is timeless,” Fete says. “Examples are all around us.”

John Pielmeir wrote the play, and is praised as an fine wordsmith whose dialogue has a beauty and density.

“Pielmeir has crafted a beautifully complex story,” Fete says. “The intricate language and elaborately developed plot make this production a joy to work on. The deeper I delve into Agnes of God, the more perfect it becomes.”

The film version of the film wasn’t received well. Roger Ebert gave it one star out of four. “Speeches that seemed stylishly theatrical on stage seem, in screen close ups, to be merely theatrical,” Ebert wrote.

“I am not a student of the film,” Fete says. “I saw it when it came out in 1985. The film is broader and much more general — not the gem presented in the script. But it has a great cast, great director and a screen play penned by John Pielmeier so still worth watching.”

This will be a quite different experience, staged in the intimate Studio Theater of the Broadway Theatre Center, which should give the play its full theatrical due, leaving audiences to debate what it all means.

One thought on “Theater: The Mystery of “Agnes of God””