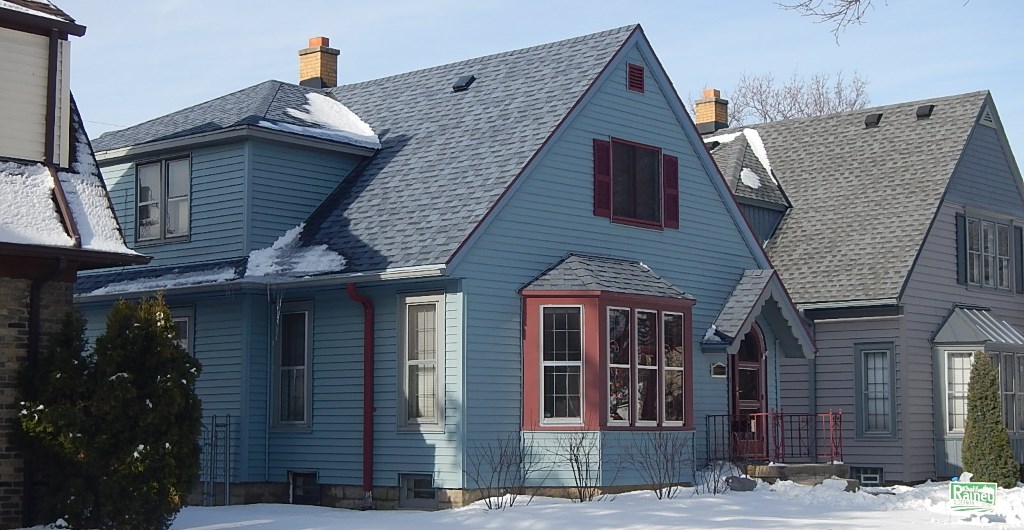 On November 30th, 7th District Alderman Willie C. Wade surprised observers by filing a declaration of non-candidacy for the seat on the Milwaukee Common Council he has held since a memorable special election in 2003: that’s when he defeated former alderman Michael McGee, Jr. after facing him in a primary that included former Ald. George Butler and current Ald. Milele Coggs. In 2004 Wade faced former alderman Fred Gordon, and beat him. He has since coasted to victory with minor opposition, and is the longest serving African-American member of the council.

He has served on the boards of Local Initiatives Support Coalition, the Redevelopment Authority of the City of Milwaukee and the Milwaukee Metropolitan Sewerage District. Wade was a key vote in support of the city’s streetcar program. He also was a big fan of the Milwaukee Bucks and supporter of a city subsidy for their new arena. The advocacy group Common Ground targeted Wade, collecting signatures from residents in his district urging Wade “to deal with the blighted conditions of the homes in his district” before supporting public funding for the arena. Wade condemned the group, but some damage was done: even before he announced his retirement a number of candidates had indicated they intended to run against him.

Wade has thrown his support to Supervisor Khalif Rainey to replace him on the council, but there will be a crowded field in the February primary judging from the number of people who have taken out nomination papers for the seat.

The house was constructed in 1941 either by or for E. P. Theurich in Grasslyn Manor, a 700-lot subdivision constructed outside the city limits in 1925 south of Lake Street, which is now W. Capitol Drive, between N. 52nd and N. 60th streets.

Grasslyn Manor, built by the Grass Brothers, was announced to the public as “Milwaukee’s Wonder Subdivision.” A 1928 advertisement bragged that the development would soon be incorporated into the City of Milwaukee, which happened that year as promised. Lots sold for $875 and up. Profits were sure to accrue to speculators smart enough to buy the lots, for surely when the last one was sold, prices would rise.”The magic touch of Grass Brothers converts farm land into beautiful homes amid grassy lawns,” the company run by Leonard and Joseph Grass bragged.

You’d certainly have expected a subdivision advertised as the “most extensive and perfected subdivision on Capitol Drive,” in which “millions have been invested,” would have sold out two decades later, but the Depression and World War II intervened. By 1931 many of the lots were tax delinquent, and in 1940 the city started getting around to selling them again, when the war intervened, also slowing development.

The neighborhood between N. 52nd and N. 60th streets is ethnically and religiously diverse. It borders the better known Sherman Park neighborhood, and the lines blur between the two. To the south end of Grasslyn Manor is a significant Orthodox Jewish community, including a Yeshiva elementary school and the city’s only Kosher market.

Senator Herb Kohl grew up in the area, as did his friend Bud Selig. The homes, on their 40-foot-wide lots, include alleys and garages. The garages usually dated after the homes.

This house was constructed during World War II and completed a month after Pearl Harbor. Few would be built for another five years, until peace came and the postwar building boom erupted, filling Grasslyn Manor and many other subdivisions that had had vacant lots for decades.

The home was 22 feet tall, and had a full basement of 10 inch blocks. The building cost $4,000. At the same time, a permit was taken out for the construction of a 14-foot by 20-foot, single-car garage to cost $200. The residence has two bedrooms, one bath, and is heated by forced air. Charles Moebius, its owner in 1951, installed a gas burner in the home, possibly converting from oil as natural gas lines were laid throughout the city after a century of manufactured gas only was available here.

In 1975 owner Viola Seehauer took out a permit to wreck the old garage, and to replace it with the current edition. The plumbing inspector took a trip to the home to certify that the garage did not have a plumbing system. Many homes today have bathrooms as large as that unplumbed garage.

The home sits with others in a neighborhood where single family and duplex residences abound. Some are bungalows dating to the neighborhood’s early development. Others like this one are simple Cape Cods. Later homes, dating to the 1960s apparently have no style at all, other than being ranchy. The area is close by commercial streets like W. Fond du Lac Avenue, and lies south of what had been Capitol Court, now Midtowne Center. Century City, a redevelopment project championed by Wade, lies twenty blocks to the east.

The neighborhood has been beset with crime in recent years, and suffered greatly from the Great Recession. However, there is reason to hope that the increasing interest in urban living, and community development projects sponsored by people like Wade, might make a difference in the area.

How Milwaukee Is It? The residence is 5.3 miles from City Hall. 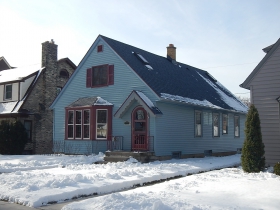 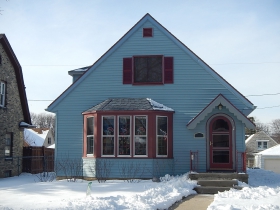 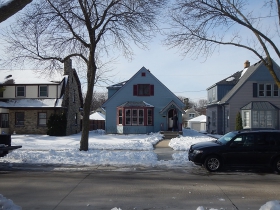 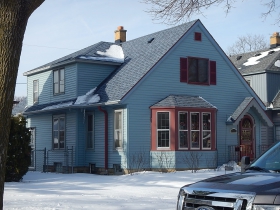 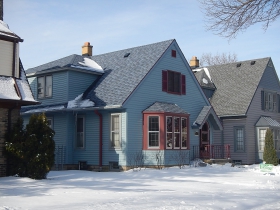 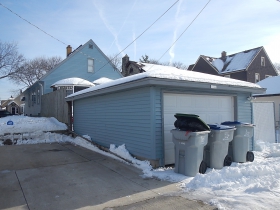