The Tender Brutality of Scott Wolniak 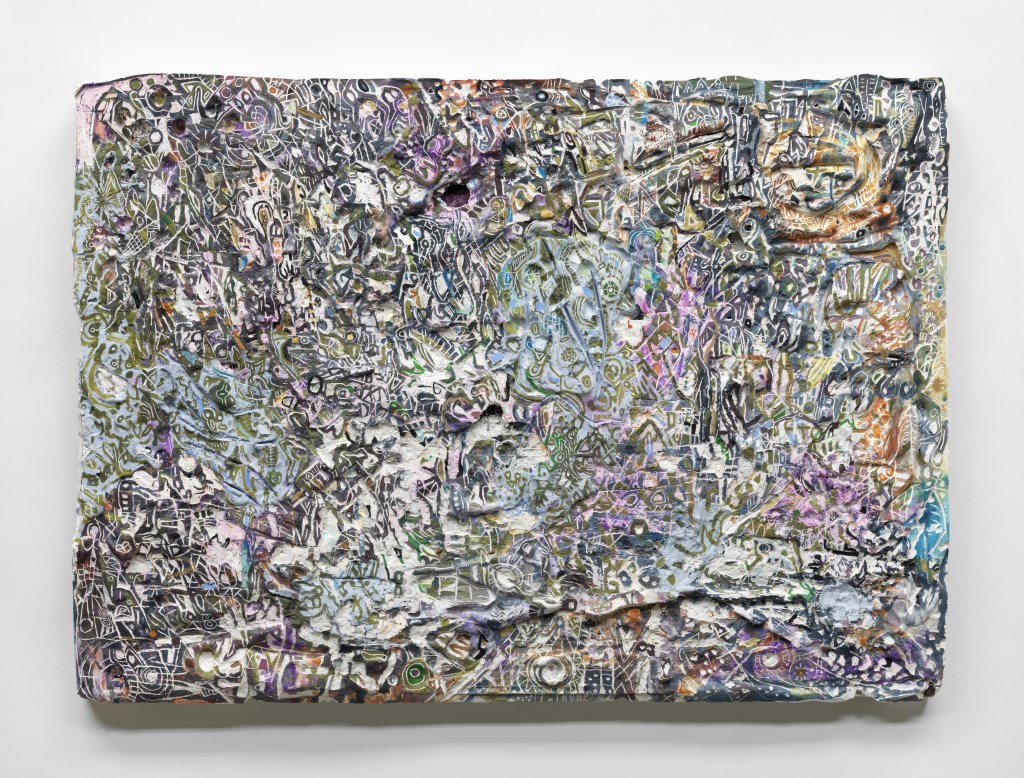 Upon entering the main room of the Lynden Sculpture Garden’s gallery you encounter a striking series of five plaster reliefs by artist Scott Wolniak which he calls tablets. They evoke the monumental stele of ancient cultures: Mesopotamia, Egypt, Greece and many other cultures used carved stone tablets to create a record of laws, commemorate victories and immortalize rulers.

Wolniak’s carved and colored plaster tablets are abstract but suggest a layering of history: the tablets have been poked, scraped, gouged, etched and scratched; pieces of burlap and wires show through, suggesting the remains of something weighty, dense, yet ambiguous.

The show’s curator, Nicholas Frank, describes Wolniak as an observer of everyday urban decay, “the crumbling and breaking apart of foundations and underlayments, the grid loosening into gravel, rust and dust.” (Many may recall Frank from his years of work running the Inova gallery and before that at his Hermetic Gallery; he’s a terrific curator.)

While some art works reproduce well in online images, Wolniak’s has to be seen to be appreciated, and requires some time to view, because there is so much there. It is all about the working of the material and the rich rough surfaces; the hand of the artist is always felt in the work’s physicality and abundant texture. The action on the material is sometimes brutal and sometimes tender.

Wolniak himself has said there is a meditative effect in the repetitive action of making all these marks: “Millions of small gestures add up to create spatial energy that is not necessarily about my hand.”

That hand, however, is very busy, creating this show’s drawings and the plaster reliefs and sculptures, which are a lovely compliment to each other. Only the drawings, all graphite (pencil) on paper, are figurative though even those border on abstraction.

A commissioned drawing “Tree-Lynden Sculpture Garden, 2015,” is on the front wall as you walk into the Lynden gallery’s reception area. It’s a large work with all the layered qualities of the tablets, but in an entirely different medium. This work is richly textured and representational yet also abstract. It’s not so much a drawing of a tree as an abstract drawing that happens to be a tree.

Wolniak’s drawings are uniformly exquisite. Many are large, complex works, with a similar approach of dense detail and then denial, of markings and erasures, of solidity and smears, but not so much as to seem contrived.

There is also a wall of smaller studies in graphite which are a bit precious because of their size, but also relate to the process of the other works on display. The first one, “Singer,” looks like a Seurat tonal sketch, with almost no line and just shadings of different value. It’s fun to compare this approach to that of the far more physical plaster tablets which are the main pieces in the show.

“Crest,” a little sculpture in the sunroom, makes a great introduction (or farewell) to the show. Deceptively simple upon first glance it reveals a rich, complex little world in miniature. A curved chunk of plaster, it combines the rough edges of something shattered or broken off with a beautiful surface reminiscent of abalone shells. Resting on top is a crescent, half-moon-like shape that is tenderly incised, covered with drawings and still retaining a fragment of string or wire embedded in its body.

I found it quite moving, though it was hard to say why. Perhaps because the piece’s shape and placement leaves it looking like an eye viewing all the great works by major figures of the 20th century century outside in the sculpture garden. Wolniak’s markings could be about any number of things, but at the moment seemed like a poignant gesture toward the long history of art. 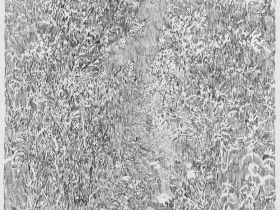 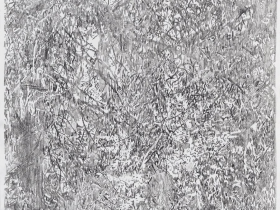 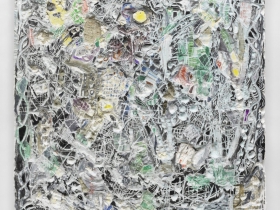 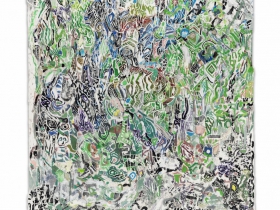 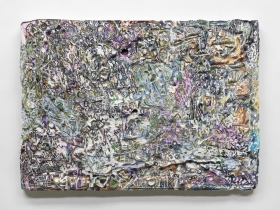