By Dave Schlabowske, Bike Federation of Wisconsin - Dec 11th, 2015 11:34 am
Get a daily rundown of the top stories on Urban Milwaukee 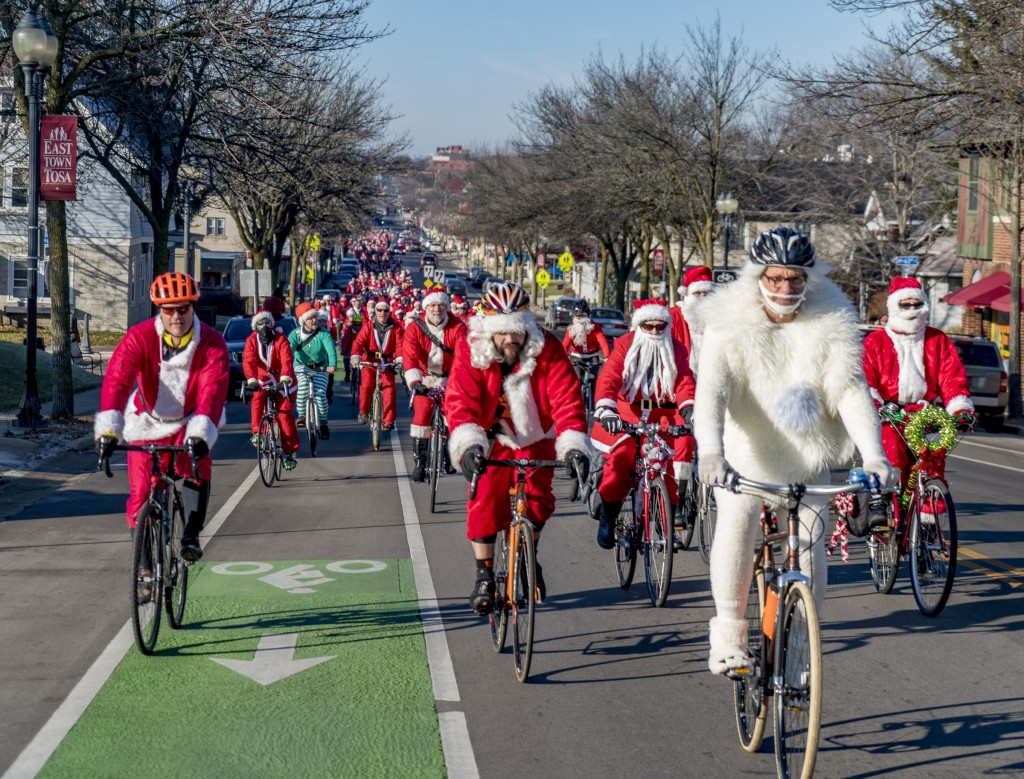 Yes, Bumbles bounce, but this one never hit the pavement thanks to the safe ride support provided by the Milwaukee and Wauwatosa Police Departments. 500 people joined us for the inaugural ride down the green bike lanes on North Avenue in East Tosa!

Nearly 2,000 holiday merry makers of every kind joined us for the 15th annual Santa Cycle Rampage this year! That is about double our numbers from last year, so thanks to all our sponsors who helped spread the word and thanks to everyone who registered for the Bike Fed’s ride from Cranky Al’s in East Tosa to Lakefront Brewery.

A special thank you to the members of the Wauwatosa and Milwaukee Police Department for providing ride support on our Santa Cycle Rampage for the first time this year. The team of officers got rave reviews for helping keep the huge group of riders together and safe as we pedaled merrily along down North Avenue. 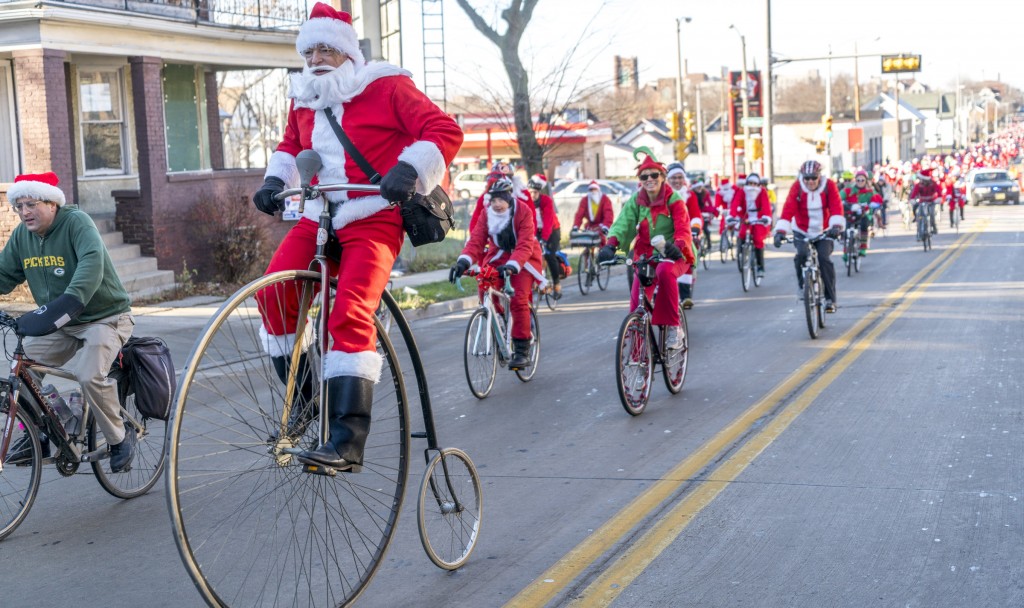 With the MPD blocking the intersections, even Santas on Ordinaries were able to keep rolling the whole route.

This year was kind of special for us because we got so many formal thank you notes and emails from participants who traveled to Milwaukee for the ride from Boston, Iowa, Illinois, Michigan, Minnesota, Iowa and cities from across Wisconsin. One of my favorite emails came from a woman who brought her mother along on a tandem:

Good morning,
I hope whomever finds this brief thank you email passes it along to the entire community at the Bike Fed.  I just wanted to thank everyone involved in the Santa Rampage this year. It was a wonderful, fun, safe, and merry event. Everyone who organized the event from Cranky Al’s, conducted business outreach, insurance, and the many other tasks associated with an event this large and chaotic should feel a sense of accomplishment and relief for tailoring the event, but keeping the spirit alive.

On a personal level, I had the delight this Saturday of riding a tandem bike with my 61 year old mother. She hasn’t been on a bicycle in 24 years and in past years always joined us for Santa Rampage riding “SAG” support in a van with my father. Last year, she said she wanted to do it if I could find a tandem. Luckily, our bicycle community in Wisconsin has such great rental options. We rented our bike from Sheboygan Bicycle Company and practiced riding several times to get the hang of the tandem. On Saturday, we donned our respective elf/Mrs Claus costumes and pushed off as a daughter/mother team filled with excitement on this thrilling adventure. We navigated the streets surrounded by smiling faces and she pedaled behind me laughing and ringing sleigh bells. When riding along National Ave, our little group sang Feliz Navidad to the excited children and all we could think of was how special this experience is. We were joined by my recently transplanted cousin from Phoenix, who was worried about what to do in WI during the winters. He rode away with great memories and is now searching out a better costume for next year.

It warms my heart to have this shared experience with my family and friends this Saturday and I can not thank everyone enough for continuing with the Santa Rampage tradition. I know there was some trepidation regarding the rowdy aspects of the ride and think the bike fed managed the experience beautifully. If ever there was a testimonial of the power of the pedals, it would be this event. My family is talking about how much fun the event was and excited about doing it again next year.

Thank you again for keeping my favorite holiday tradition going and organizing the merriest event of the year!

With more than 1,000 Santas, we don’t all fit in Lakefront Brewery anymore, but nobody complained about the tight quarters after they got a delicious beer.

I even spoke to one couple who met on a previous Santa Cycle Rampage and got married!

Many Santas took it upon themselves to do other good deeds in the holiday spirit. We had a food drive for the Hunger Task Force at the start of the ride and another Santa collected $500 for the World Bicycle Relief outside Lakefront Brewery! That is the kind of Santa gone rogue we can get behind!

We sold out our new Santa Cycle Rampage hats and people seemed to love the new shirts this year too. Next year we are thinking of offering jacquard knit Santa Cycle Rampage scarves, like soccer teams have. And thanks to our sponsors, we raised nearly $18,000 to help us make Wisconsin an even better place to ride a bike.

Given the positive response we had to our new system in which people registered for the ride, we will stick with registration and the same route next year’s rampage on Saturday, Dec. 3rd, 2016. We have received requests for more organized morning rides from Shorewood and other areas. If we can find ride leaders, we are happy to add additional rides, but we don’t want to insist everyone join the Bike Fed or pay to enjoy this fun day.