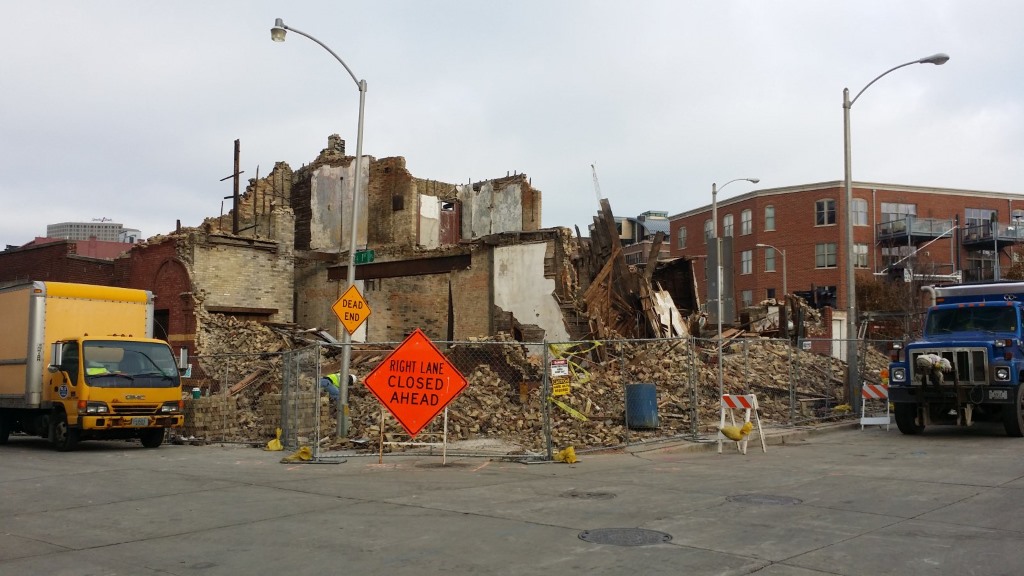 In 1984 restaurateur Karl Kopp, best known for his Kopp’s custard stands, bought the building on 100 E. Seeboth St. next to the Water St. bridge on the Milwaukee River. At the time, the area was in decline: this was well before the revival of the nearby Third Ward and the explosion in downtown residential projects. For two decades the building was underused, mostly for storage.

But by the early 2000s, the redevelopment of the Milwaukee River had turned this location into a potential gold mine, as condo and apartment developments sprang up along the river, many of which rehabbed classic old buildings. The building Kopp owned was now a fantastic location for a residential project. In 2003, Kopp and a partner developer  announced plans to raze the building and build a $20 million project with eight condos and some commercial space, but city officials came forward and designated the property, formally known as the J.L. Burnham Building, a historic structure. 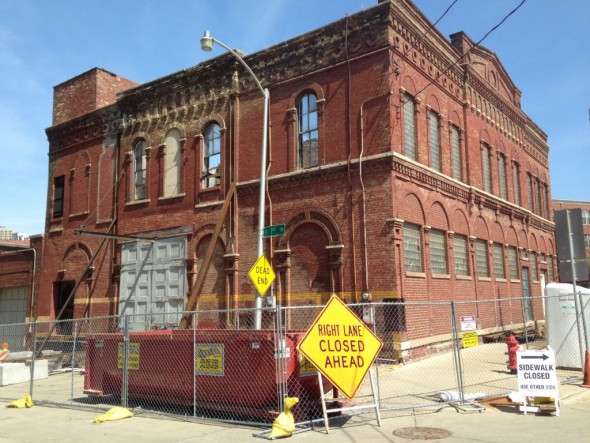 J.L. Burnham Building prior to demolition. Photo by Jeramey Jannene.

The Historic Designation Study Report that was done calls the Burnham Building “Milwaukee’s best-preserved example of an early Italianate style commercial building. Its remarkable masonry work is a testament to its brickmaker owner and the tradesmen who built it and displays exceptionally fine detail in its pilasters, corbelling and cornice.The pressed cream brick was an expensive material in its day… In the hands of master craftsmen here, the cream brick achieved a plasticity that almost contradicts the hard-edged material. The round arches, arcuated frieze, panel effects in the pediment and delicate rondels appear to have been carved from stone rather than built of brick. Such details were difficult to achieve in their day and would be so today.”

The building, the report went on, is “also remarkable as one of only three known surviving Milwaukee examples of the arcaded storefront…Although Italianate commercial buildings survive in limited numbers in Milwaukee, there are no other examples of the early Italianate type that is represented by the J.L. Burnham Building and few that have remained as intact.”

Adding to the building’s pedigree was the surrounding neighborhood, which was the original commercial district of Walker’s Point; because of its architectural significance, the area was listed in the National Register of Historic Places on November 30, 1987.

Kopp might have changed course and considered a project to renovate the 11,430 square foot, two-story building. But instead he dropped his plan and let the building sit.

In 2007 the building was referred to the city Department of Neighborhood Services, says Ron Roberts, the department’s commercial code enforcement manager. “The floors were collapsing,” he notes. “There were several areas of the building where interior floor structures had collapsed. I was surprised by the deterioration that had already occurred.”

What caused the deterioration? A leaky roof, Roberts says. “The water infiltration served to accelerate the deterioration.” Roberts believes the roof had been leaking for years, probably before Kopp had announced plans to erect a new building in 2003.

Had this been an average building, Roberts says, the city would have condemned it. But because of its historic and architectural significance, the raze order was downgraded to a stabilization order, in essence putting the owner on notice it needed to be fixed.

“Mr. Kopp responded that it would cost too much to repair,” Roberts notes. “That was not enough for us. We need to know he’s explored every option to repair it.”

Precisely what exploration was done by Kopp is unclear. In the meantime the roof kept leaking.

In the fall of 2013, Kopp submitted plans to the city’s Historic Preservation Commission to renovate the building and create a pizza restaurant, which would have been a departure from any previous places he owned, though the historic building would have offered the sort of ambiance found at Kopp’s chic Elsa’s restaurant.

Because Kopp was applying for historic tax credits, his plans had to undergo revisions required by the state Historic Preservation Office and the National Park Service. Meanwhile the roof kept leaking.

In March of 2015, the city approved his plans to demolish the interior, which included removing the roof. Did Kopp do anything to protect the interior from the rain or snow that would be falling into the building?

Apparently not. Onmilwaukee.com did a story saluting Kopp for a renovation that “blows the roof off” the building. The photos echo the headline about a building with no roof.

Eight months late, on November 9, the city issued a condemnation order on the building. The order came after city inspectors verified the conclusions of Kopp’s engineer that the building was unstable, with its interior walls at the point of collapse. By then, Roberts says, replacing the building would cost “millions of dollars.”

Kopp, who rarely talks to the press, made an exception in this case and did a “brief interview” with the Milwaukee Journal Sentinel, saying he had spent nearly $750,000 on preliminary efforts toward restoring the structure. “And then we got the news that the building would not withstand that type of renovation,” he said. “…I’m a little depressed. ‘Little’ is being kind.”

It could hardly have been a surprise that the building’s interior was falling apart. It had been falling apart since at least 2007 and probably for years before that. Had it been a normal building, the city would have razed it eight years earlier.

As for what he would do now, Kopp said he might revive the idea to build a new residential and commercial building, the 2003 project thwarted by the city’s historic designation.

Downtown alderman Bob Bauman believes Kopp’s decision to open the roof destroyed the building. “He’s been pretty resistant to the historic process from the beginning. The roof was torn off, so much so that wood was exposed and it deteriorated.”

But Ald. Jose Perez, in whose district the building is located, says he thought Kopp was genuine in his efforts to save the historic structure. “I would have thought it was moving forward.”

Perez notes that when Kopp first announced the plan he had the potential to get a 40 percent historic tax credit from state and federal government, but the state announced a cutback in the credits in February 2015.

But Kopp made it clear he was proceeding after this happened and was soon removing the roof. By the time the building had completely deteriorated, even a 40 percent tax credit wouldn’t have made the building’s renovation feasible.

In retrospect, it’s clear the building had been deteriorating for a long time. Only Kopp knows when the water infiltration began, but we do know he wanted to tear it down in 2003. Perhaps it never was feasible to save. Certainly by 2007 the building was already in terrible shape and would have been in much worse shape by the time the restaurant project was approved.

Yet Kopp hired an architect and claims he spent $750,000 on the project. Was it just a ruse to put off any criticism from the historic preservation community? “It didn’t seem like a charade,” Perez says.

Bauman laments the loss of a “prominent” historic building and “its heritage, its unique identity. If you follow Kopp’s lead, you start to lose all that, what made this city unique.”

Bauman says he cannot recall a case where an owner of a historic building let it fall apart, “at least not to the point where they could maneuver themselves into a raze order.”

If so, this provides a template for other owners of historic buildings that prefer not to save them. Ultimately, there may be little the city can do to prevent this.

Demolition of the J.L. Burnham Building 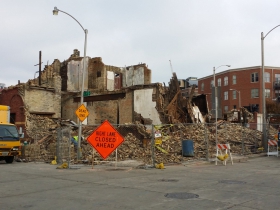 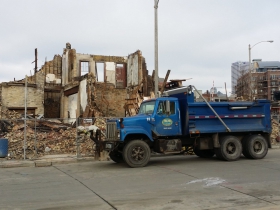 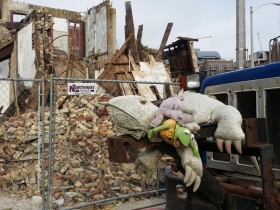 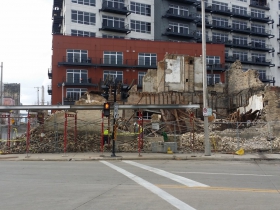 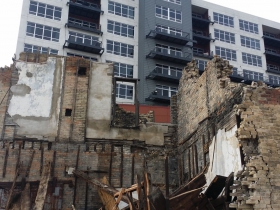 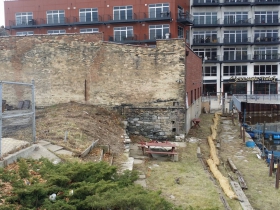