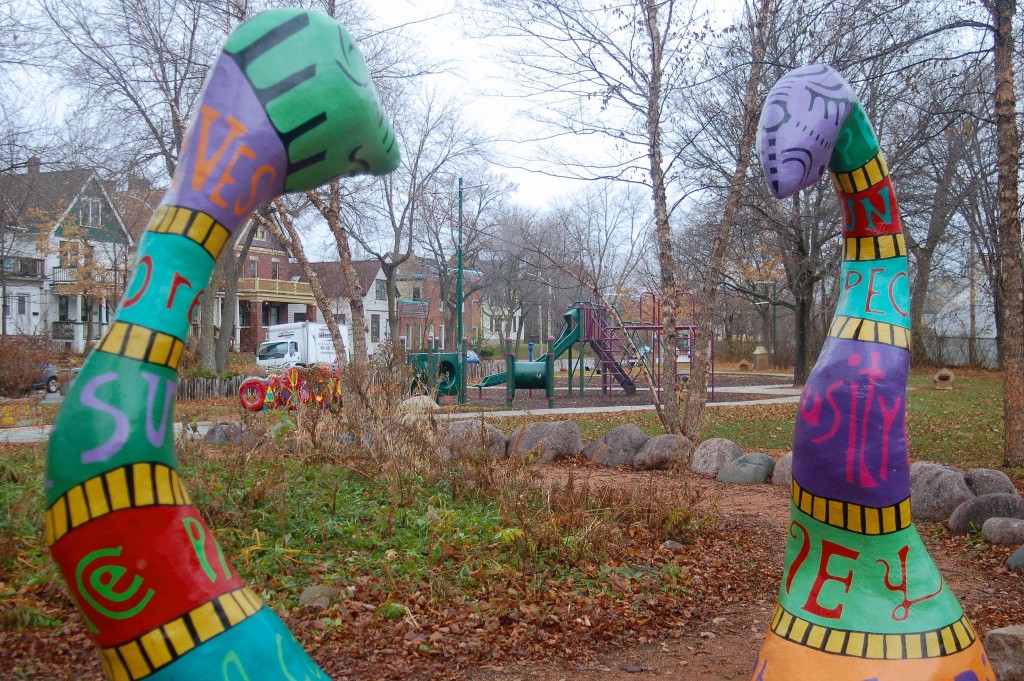 Snail’s Crossing Park, located on the 3000 block of Bremen Street, is one of 12 playgrounds to be rehabilitated as part of the MKE Plays Initiative. Photo by Edgar Mendez.

Riverwest residents met recently to discuss the future of Snail’s Crossing Park, located on the 3000 block of Bremen Street. It will be the third of 12 playgrounds to be rebuilt as part of the MKE Plays initiative.

Snail’s Crossing is different than the 11 other parks identified by the Department of Public Works (DPW) as the most deteriorated in the city. It’s well kept, and public engagement at its outdoor art space is strong. The playground features floor murals, sculptures and natural elements including large boulders, in addition to typical playground equipment such as swings and slides.

“At first everybody was kind of shocked that [the park] was chosen to be rebuilt,” said Marina Lee, who has led efforts to improve the space for the past 12 years. She added that thousands of volunteers have helped raise more than $60,000 for Snail’s Crossing over the years. 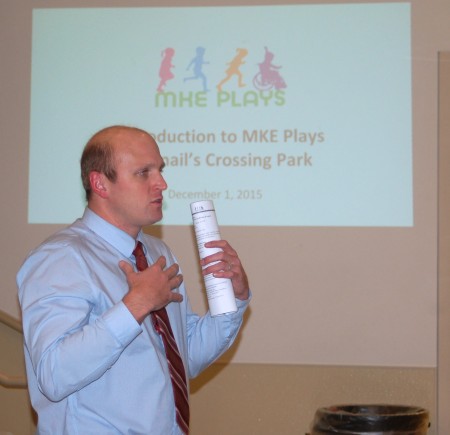 Ald. Nik Kovac, who represents the Riverwest neighborhood where Snail’s Crossing Playground is located, speaks to the audience during an MKE Plays planning session. Photo by Edgar Mendez.

According to Joe Kaltenberg, program coordinator for MKE Plays, the process that identified parks/playgrounds most in need of repairs took into account the resources the city has provided for the space in recent years.

Although residents have spurred investment in the park, “that doesn’t take away from the city’s responsibility to fund improvements or support the playground,” Kaltenberg said. A total of $120,000 has been allocated for the Snail’s Crossing project, he added.

Though she was apprehensive at first, Lee said that she and others eventually realized MKE Plays was a chance to make the park even better. “There’s opportunities to use the funds for more planting, more forestry or even for infrastructure,” she said.

Monica Reida, who moved to Riverwest in March, said she came to the meeting at the Gordon Park Pavilion, 4848 N. Humboldt, to encourage placement of more lighting at the playground.

Bruce Wiggins, who attended the meeting with his two granddaughters, said he hoped for more senior programming there. “Not just for me to spend time there with my grandkids, but for me to go there on my own to meet and talk to other seniors,” Wiggins said.

The first stage of the MKE Plays process, according to Kaltenberg, is engaging residents, along with organizational and city representatives, to collect data that will help shape the future of Snail’s Crossing.

More feedback will be collected during a community meeting focusing on the park’s new design in January, while construction will take place in the summer.

One park, Arlington Heights in Silver City, has been completed as a result of the MKE Plays initiative, while a second, located at North 17th and West Vine, is in the final stages. The planning process for six other parks will begin this winter, according to Kaltenberg. The majority of the initiative is being funded by private contributions of nearly $950,000 from organizations including the Helen Bader Foundation and Zilber Family Foundation. The city has allocated $719,000 through 2016 for the initiative. Most of the parks, including Snail’s Crossing, are small playgrounds.

Ald. Nik Kovac, who represents the area, said he expects the park to preserve its current feel while becoming a more safe and inviting place for a variety of residents. “We want visiting the playground and staying active to be part of the neighborhood routine,” Kovac said.

One thought on “Program Will Improve Riverwest Park Snails Crossing”