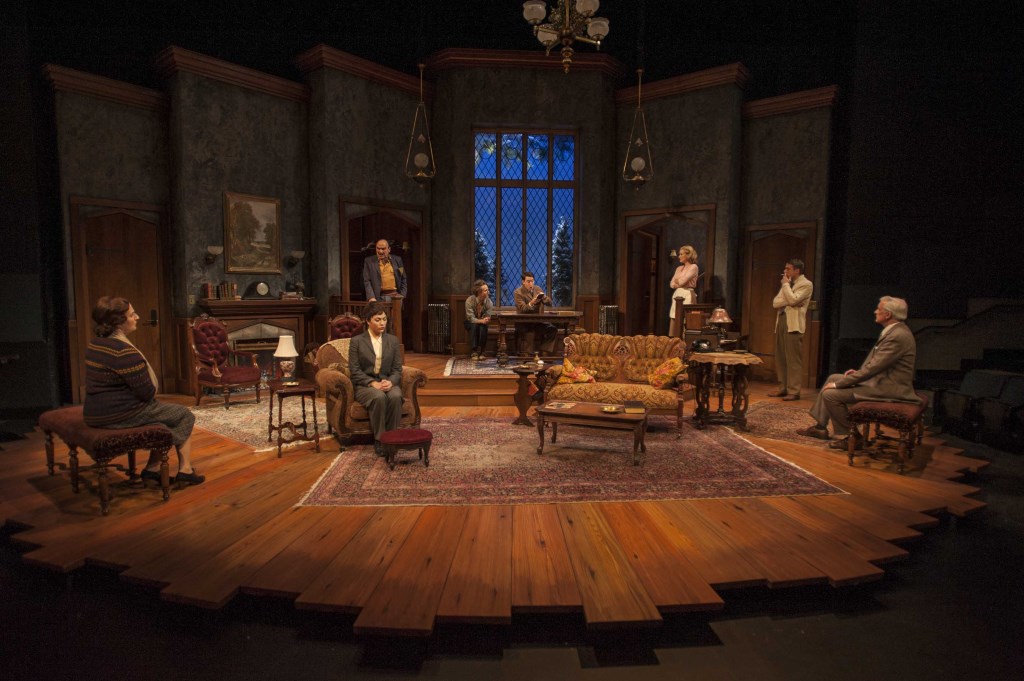 In an Agatha Christie whodunit, everyone knows what to expect – but not from where to expect it. The Mousetrap has proved the sturdiest of the lot – and what a lot it has been from the prolific mystery writer whose style (nursery rhymes, shrieks in the dark, ominous hints in innocent conversation, unknown depths behind stereotyped exteriors) remains indelible almost 40 years after her death.

The Mousetrap onstage has been a steady London draw since 1952 (yes, that’s a record), and now Milwaukee Rep audiences through Dec. 20 must take the same pledge that more than 260,000 previous stage viewers in Great Britain have. Don’t reveal the murderer and spoil the fun.

Of course, you’re free to guess during the show  – that’s what this offering at the Quadracci Powerhouse is all about as a half dozen manor guests, isolated by a snowstorm, realize one of them is a revenge motivated murderer set loose among closed-mouth potential victims. This is vintage Christie, a Victorian houseful of visiting eccentrics with extreme mannerisms mixed in with hosts whose normalcy becomes suspicious.

The isolated manor itself — skillfully created by Jack Magaw and cunningly lit by Jason Fassl with Lindsay Jones’ sound effects from radio voices to ticking clock almost another live performance – is not just a playland of doors and shadows but essential to provide some distraction as the denouement is slowly unfolded. Magaw centers the set with a French window through which we see snow falling and Sergeant Trotter arriving on skis to deal with the murderer. Trotter is played by Will Allen as a nervously green sleuth edging toward hysteria in the face of so many obstinate adversaries. Miss Marple he ain’t.

In approaching a familiar warhorse and seeking a fresh approach, director J.R. Sullivan pursues a balance between expected anchors and loose cannons. He allows some actors to insert flourishes of modernized wit while knowing he has some Rep stalwarts to keep the Christie styling intact. Laura Gordon and Jonathan Gillard Day know exactly what to do as the annoying Mrs. Boyle and the impeccably implacable British Major Metcalf.  As keepers of the manor and suspects themselves, Kelley Faulkner handles much of the plot explanation with direct if repetitive simplicity and Matthew Mueller as her brooding husband combines an attractive amount of husbandly bluster accompanied by furtive looks.

But Brendan Meyer is encouraged to play wild-haired twitchy Christopher Wren as a refugee from a Tim Burton movie, which is just at the edge of over the top but enjoyably creepy. Greta Wohlrabe is allowed just a hint of Lesbos in the mannish Miss Casewell, reminiscent of the approach of Claire Bloom in the film, The Haunting. Greg Vinkler, a familiar presence at Door County’s Peninsula Players, turns Mr. Paravicini into so obviously a cackling version of Hercule Poirot by way of leering Salvador Dali that patrons have to wonder what secrets lie behind the makeup. Such outer world references explain how, without violating the original concept, these actors have been encouraged to add a touch of commentary to keep the audience on edge.

To fully enjoy this old-fashioned piece of work, you really have to appreciate the Agatha Christie methods – or have been raised as I was reading her books. A sense of enjoying a familiar genre helps keep the production alive and subdues the feeling that no amount of expertise can disguise some of the saggy melodramatics here.

You also have to suppress questions about why the Milwaukee Repertory – after celebrating its 60th anniversary and pledging new leadership for Milwaukee’s creative economy – stopped off to expend first class technical expertise and powerful acting experience on The Mousetrap. A change of pace between Dreamgirls and Of Mice and Men doesn’t quite cut it. 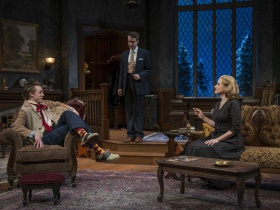 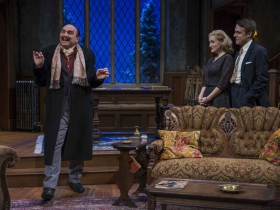 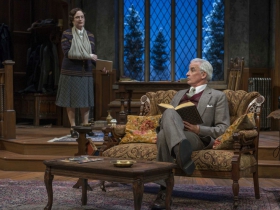 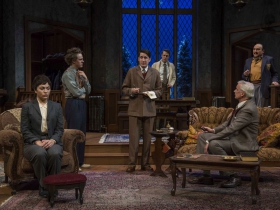 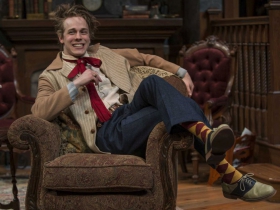 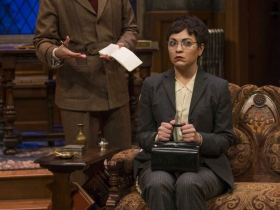