By Dave Schlabowske, Bike Federation of Wisconsin - Nov 22nd, 2015 03:02 pm
Get a daily rundown of the top stories on Urban Milwaukee 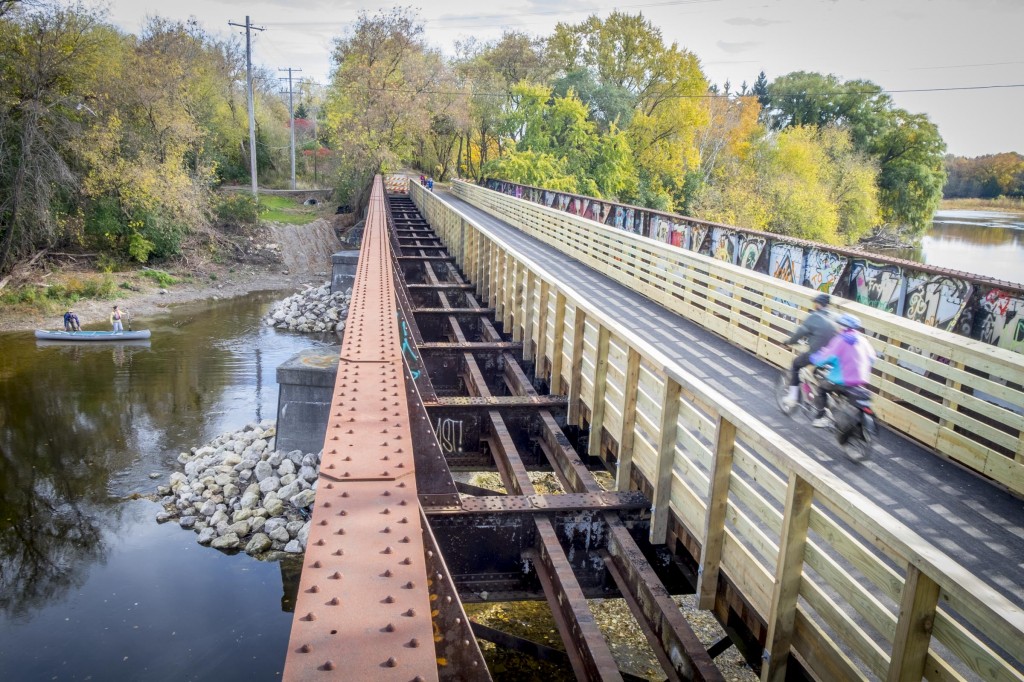 2015 has been an incredibly important year for trails in the Milwaukee area. Three long awaited off-street trail connections have been finished and they should have catalytic impacts on trail use.

On Monday, Milwaukee County Executive Chris Abele and Parks Director John Dargle cut a bicycle chain to officially open the highly anticipated “Oak Leaf Trail Extension Phase Four.” The ceremony was at 4927 N. Lydell Ave, just north of Hampton Avenue, to celebrate the completion of what will become a 6.6-mile bike trial connecting the Oak Leaf Trail from the Milwaukee Lakefront to the Ozaukee Interurban Trail. 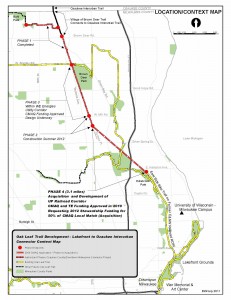 The trail had ended in Estabrook Park and people had to use parkway roads and municipal streets to continue north. The extension eliminates a barrier to use of the Oak Leaf Trail and its connectivity within the regional network of pathways.

What finally allowed Milwaukee County to build this trail was the purchase of the 3.1-mile segment of unused railway corridor, and its conversion into a non-motorized, multiple-use trail, as part of the Oak Leaf System. Even though the railroad had not been used for so long that trees were growing between the tracks, it wasn’t until December 2008 that the Union Pacific Railroad began formal proceedings to officially abandon the corridor. In 2010, the Parks Department secured a federal transportation Congestion Mitigation and Air Quality Improvement Program grant to acquire the segment. A second federal transportation grant, for development of a bikeway within the corridor, was also awarded in 2010. Additional support for the acquisition and development of the trail was provided through two Wisconsin Department of Natural Resources Knowles-Nelson Stewardship Program grants in 2013 and 2014. Transfer of ownership from the railroad to the county was finally completed in June 2015.

Given the unseasonably warm weather, the new trail was packed with users as soon as the pavement and bridges were finished. I have ridden the new segment and can’t emphasize enough what a game-changer this last 3.1-mile segment is. Other people I have talked to said they felt the same way: this off-street connection makes for a much more pleasant ride.

With this segment done, you can now ride 49 miles from downtown Milwaukee all the way to Oostburg on trails. The ability to put in an out-and-back century ride on paved trails is huge. Thousands of families who live along that trail now have quick access to such a wonderful recreation corridor completely free from motor vehicle traffic. It also provides them with a beautiful, stress-free commuter route.

Milwaukee County also just finished the reconstruction of the Menomonee River Parkway and added a paved, off-street trail with that road project. While some landscaping work needs to be finished, it is now possible to ride paved trail all the way from Mayfair Road to all the great shops and restaurants in the Village of Wauwatosa, off State Street. This project leveraged a road project to improve bicycling, walking, and calm traffic in a neighborhood that runs along heavily used park land. It is also a great example of intergovernmental cooperation, since the project involved Milwaukee County, the City of Milwaukee, the Village of Wauwatosa and the Milwaukee Metropolitan Sewage District!

I am proud to say the Wisconsin Bike Fed was on the consultant team with GAI Consultants and Ken Saiki Design Landscaping to help with the design. We only played a small part, but did review plans and make suggestions for improving the bicycling and walking connections. This project should also have a catalytic effect increasing the number of people who use the trails along the Menomonee River Parkway. 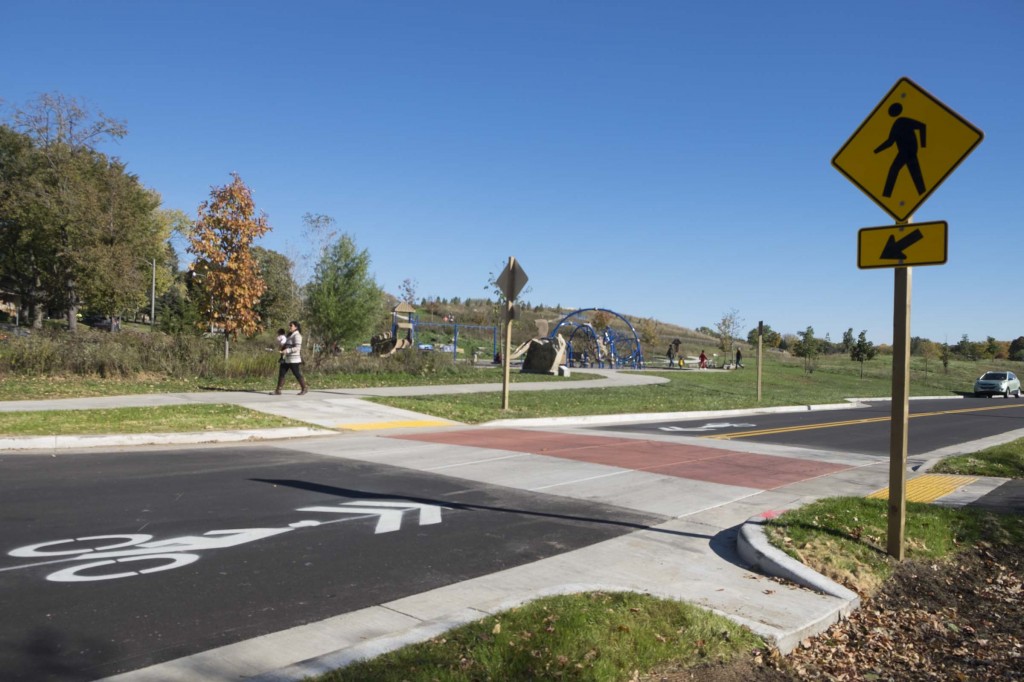 The Menomonie River Parkway reconstruction included traffic calming like this neck-down and raised crosswalk to slow motor vehicles and make it safer for people to cross the road.

As if that wasn’t enough, Milwaukee County also resurfaced and rerouted some of the oldest trails on Milwaukee’s south side through lakefront parks. Many of these trails used to be only six feet to eight feet wide and were in very poor condition. I ride to Racine pretty often, and I usually got off the trails and continued on the roads when I got to Sheridan Park. Now the trails provide an off-street route from South Shore Park in Bay View to Grant Park in South Milwaukee. The pavement is wide, smooth and fresh. With bountiful views of Lake Michigan and the beaches, these are some of the most beautiful segments of trails in the metro area.

So how about a huge THANK YOU and job well done to the hard working folks at Milwaukee County and the Parks Department in particular!

But wait, I’m not done yet! The City of Milwaukee just finished the extension of the Beerline Trail all the way past Capitol Drive. This wonderful paved trail runs through densely populated neighborhoods with some of the highest bicycle use in the area, so it is sure to get great use, but what makes it unique is the amount of investment in public art along the trail. 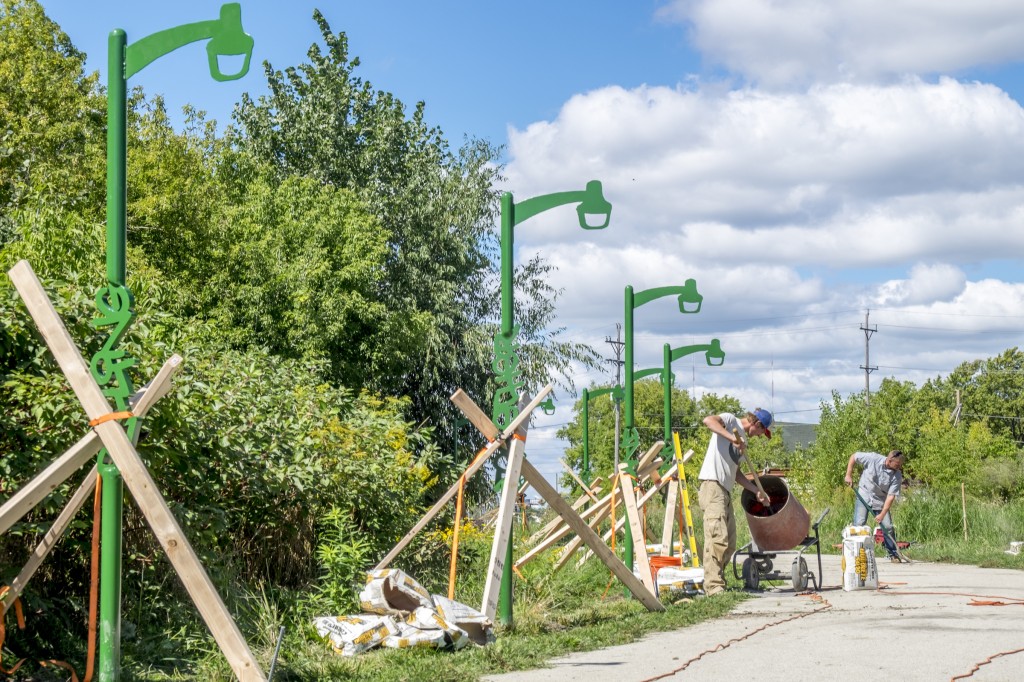 Example of some of the public art that is going in along the Beerline Trail.

Much of the art will be coordinated by people from and the Beintween, Greater Milwaukee Committee’s Innovation in Milwaukee (MiKE) initiative and The ARTery, as part of a Creational Trails effort, which aims to “activate spaces as a means of encouraging acceptance and growth of the cultural diversity in Milwaukee,” according to its website. The project was initially funded using half of a $350,000 grant from ArtPlace America (which also funded other projects in Milwaukee).

What a great year for trails in the Milwaukee area! Thanks to everyone, from the community members who have been advocating for these connections to the state, county and municipal employees who got the projects done and to the contractors who did the great work!