Residents strive to keep a healthy mix of uses in their densely populated neighborhood. 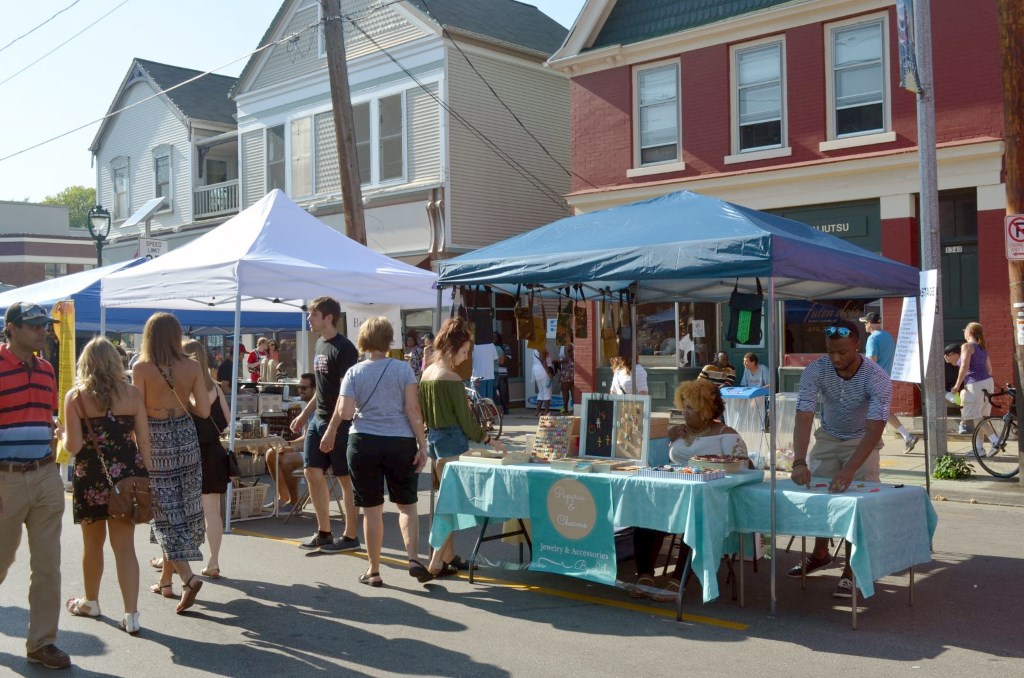 Perhaps the best endorsement Brady Street ever got came from Oscar Wilde who, after strolling it on an 1882 Milwaukee visit, declared,  “If what you want isn’t on Brady Street, you probably don’t need it.” That cheeky statement, reported back then by the Milwaukee Sentinel, may still apply. The legendary street offers soup-to-nuts commerce housed in eclectic architecture largely dating from 1870 to 1930. But there are fears it may lose some of this diversity.

Named in 1840, Brady Street has been the Lower East Side’s main drag since the late-19th century. Early on, the neighborhood mostly attracted working-class residents and its main street always blended commerce and housing. St. Hedwig’s Catholic Church, the street’s towering landmark, was built in 1886 to anchor the Polish community. It’s one of several buildings faced in the city’s distinctive Cream City brick.

These days, abundant entertainment offerings — lots of bars — have made Brady a hot spot, including for late-night revelers. But partying is not everyone’s cup of tea—or microbrew pint. Noisy nightlife and inebriated patrons can diminish a neighborhood’s appeal even as its profile gets raised. Minneapolis transportation planner Nathaniel Hood notes that entertainment districts can be off-putting to families, baby boomers and others.

The concentrated entertainment zone on Water Street has little daytime commerce and few residents to be concerned about rowdy revelers. It was the subject of a much-cited research paper on downtown revitalization by urban-planning professors Daniel Campo and Brent D. Ryan. Old World Third Street, another historic district, is busy both day and night and though the residential population has increased, it’s still modest.

Vocal Brady Street residents and merchants recently took a stand about not wanting their dense neighborhood to become merely an entertainment district. Many members of the Brady Street Area Association opposed a proposal to replace a newly vacated hardware store with yet another bar. A buyer wanted to purchase the building and lease that storefront for a tavern. The 118-year-old, three-story building also has eight apartments. Owners Cathy and Tom Borneman opened the store in 1994; it succeeded another hardware business. They’re in their sixties and ready to retire.

The district’s alderman, Nik Kovac, also objected to another straight-up bar. He and others want daytime retail in the 3,600-square-foot storefront. Some say a restaurant might be okay, but even that may be a hard sell, given their ubiquity. In addition to 11 bars, there are 24 restaurants (plus an Italian diner opening soon) along the nine-block strip. Many have sidewalk seating or courtyards–thus increasing the noise factor. Kovac explains: “It’s not that one more bar will tip the balance. But it’s never just one. It’s about the cumulative effect of replacing one store after another with a bar.” The intense opposition scuttled plans for a Camp Bar to replace the hardware store, and it is now slated to open in the Third Ward.

Brady Street has long epitomized a dense, walkable, mixed-use neighborhood–with possibly more varied uses than any Milwaukee street. People have lived, worked, shopped and played on this classic Main Street for generations. Frank Alioto, a neighborhood native and author of a book on Brady Street’s history, wrote “it is arguably the most densely populated square mile in the state of Wisconsin.”

Its location helps explain that: located on the edge of Downtown between Lake Michigan and the Milwaukee River, the area first drew East Coast Yankees and German settlers before becoming a Polish-immigrant enclave. After 1930 it also became known as Little Italy and in the 1960s and ‘70s was the hub of Milwaukee’s counterculture. The area was in decline before developer and neighborhood resident Julilly Kohler, along with others, led a revival in the 1990s.

Today, walking along Brady Street, you’re likely to encounter a cross-section of Milwaukee’s citizens in a live-and-let-live atmosphere. A mélange of old and young, hipsters, students and visitors mingle with long-timers and newcomers. Despite its ups and downs, it’s remained a strong community with a memorable sense of place.

Unlike some “entertainment zones” with little other retail, Brady Street has maintained a vital daytime economy with everything from Glorioso’s Italian grocery and Peter Sciortino’s Bakery (mainstays since the ‘40s) to coffee shops, cleaners, tailors and salons to tattoo and vape shops. Diversification has helped it stay resilient and residents and merchants are striving to keep that delicate balance. Sometimes that’s a challenge and not everyone is glad the proposed bar was shot down. Mari Cucunato, the owner of Mari’s flower shop, recently told the Milwaukee Journal Sentinel. “I know that everybody wants retail…but we’re in an entertainment area.” She says her business has struggled in recent years and several shops have come and gone.

Business remains brisk for others, including Judy Kallberg’s Uncommon Items, which sells clothing and jewelry. She told the Journal Sentinel there’s room for more retail. “I think it’s going to get better and better as the economy improves.” Pat Suminski, a lifelong Brady Street resident and officer of the street’s business improvement district, thinks that challenges facing retailers everywhere have more to do with online shopping and other forces. She sees potential for new retail that serves neighborhood needs, continuing Brady’s longstanding tradition. Suminski says one drawback of being viewed as an entertainment district is that “some visitors forget to respect that it’s also where people live.” She knows many who have resided there 40, 50 or 60 years.

Engagement by neighbors plays a crucial role on this eclectic street. The Brady Street Area Association began in 1988 (reconstituted from an earlier group). A few years later a business improvement district formed. The two groups collaborate on many efforts while keeping separate boards and agendas.

Both residents and business owners (often one and the same) take an active role in how Brady Street evolves. For example, parking can be tight since most spaces are on-street and there are no parking structures. Having reached consensus about shared values, the BID has promoted walking, bicycling and using buses and other transit. They’ve arranged for plentiful bike racks and a bike-sharing station, as well as benches, better lighting and other amenities. Recognizing the value of public spaces, residents also initiated the creation of three pocket parks in the neighborhood, including what became the popular Swing Park beneath the nearby Holton Street Bridge. There have also been efforts to make the street function well as a welcoming public space.

Over the decades, champions of historic preservation and New Urbanism have played key roles in Brady Street’s progress. Several citizens worked with city officials to obtain a designation of Brady Street as a historic district as well as placement on the National Register of Historic Places, both achieved in 1990. Under former Mayor John Norquist, the city adjusted zoning guidelines to help keep the street’s distinctive character. Consequently, most newer development is consistently human-scaled and blends unobtrusively with existing architecture. Most of the few national chains are located in a strip mall at the east end. Perhaps the most glaring anomaly is the presence of two 24-hour pharmacies within spitting distance—a phenomenon more common in suburban areas.

Kohler and others have promoted the district’s revival through sustainable and smart-growth approaches while opposing the wholesale razing of buildings by large developers. To connect neighborhoods, she helped get funding to build the Marsupial Bridge to Riverwest and pushed the city to build another bridge to the lakefront. She also spearheaded a project to celebrate Brady Street’s history in sidewalk pictographs along the entire corridor.

The recent uproar over adding another bar to Brady Street did not happen out of the blue. It reflected an ongoing collective dialog as neighbors wrestle with what it means to juggle various types of commerce and accommodate residents’ needs. Those complex issues are both philosophic and pragmatic.

The committed involvement of both residents and merchants has been essential in maintaining Brady Street’s vibrancy and livability. Keeping its trademark multiplicity—and its inimitable sense of place–will likely continue benefiting the neighborhood, though it may take periodic debates and disputes to settle these issues.

Highlights of the Brady Street Neighborhood

An earlier version of this article appeared on Strong Towns, a nonprofit that promotes a model of development that allows cities, towns and neighborhoods to become financially strong and resilient.